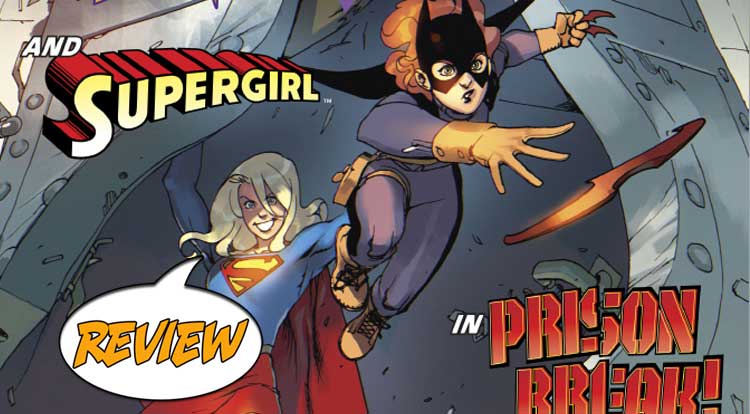 Together again for the very first time!  The Girl Of Steel and the Dominoed Daredoll team-up to deal with a mysterious mental manipulation, and realize that maybe they need new nicknames that work better in 2017…  Your Major Spoilers review of Batgirl Annual #1 awaits! Previously in Batgirl: Returning to action as Batgirl after her time as Oracle, Barbara Gordon has been through a lot in a short time.  Now, she’s on the trail of a villain known as The Red Spur, whose vendetta against technology has brought both of them to National City, far away from the dark corners of Gotham City…

Normally, I have issues when a character seems so much younger than my brain wants to think they are.  That’s why I’m so surprised how much I enjoyed this issue’s lead story.  After a chance meeting while chasing down Red Spur, Batgirl agrees to help Supergirl infiltrate a Cadmus black site lab, fitting with Wayne Tech security systems.  Both Batgirl and Supergirl, who are approximately 25 in my head, seem to be much closer to 21 here, but their easy interactions and dialogue make it all work.  Once inside the Cadmus site, they discover a young man named Caleb, whose cryo-powers have put him in Cadmus clutches.  They track down the woman who has been communicating with Supergirl in telepathic Kryptonian, a character that I expected was Saturn Girl, who has been popping up here and there since Rebirth, but instead we find Psi, a new version of a pre-Crisis Supergirl villain who hasn’t been seen since probably 1988…

THE OLD ‘SWITCH THE TELEPATH’ ROUTINE

Whatever gave Psi her powers also put in her mind that she needed to get into the Phantom Zone, something she finally achieves thanks to the knowledge in Supergirl’s head. Batgirl and Supergirl’s adventure will apparently continue in Batgirl’s own book, while the second half of the issue features Batgirl finally reconnecting with Alysia after virtually disappearing from her life.  We know that it’s because the creative team on the book changed, but it’s nice to see the creators addressing the characters in-universe lives rather than sweeping it under the rug, and the idea that Alysia ends up tagging along because she doesn’t want to get blown off once more is cute.  Both art teams are really good this month, but special attention should be given to Inaki Miranda, who handles the first tale.  I’d love to see her taking on a regular Supergirl/Batgirl team-up book and her take on Barbara’s current costume is really attractive and well-designed.

I enjoy both of the stories in this issue, and I really like the thematic carry-over of friendship (a new friend in Supergirl, an established one in Alysia) through the issue.  Batgirl is very resourceful, smart and heroic throughout, which is a double-win, leaving Batgirl Annual #1 with a well-deserved 4 out of 5 stars overall.  Even with the Saturn Girl swerve, both stories are well-conceived, well-drawn and make me appreciate the main character and her world, which is a win/win no matter how you slice it…