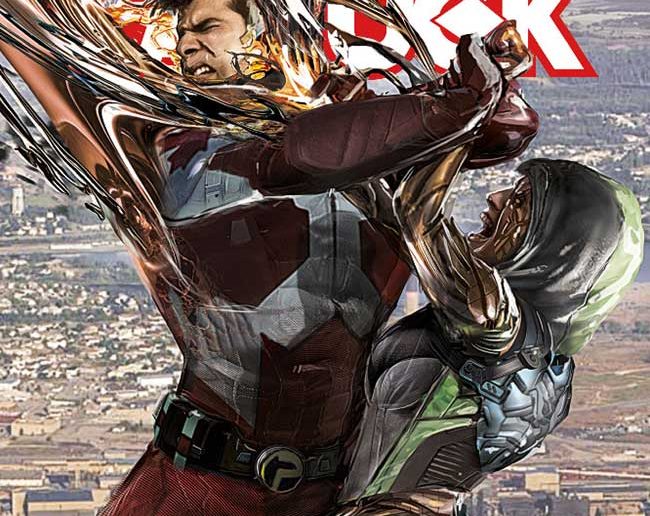 The mysterious alien menace continues to tear through random locations around the globe and the casualty count is high. Is there a pattern to the havoc? With Kebec and Northguard taken off the board, who can stop it?
Written by Kalman Andrasofszky
Illustrated by Leonard Kirk
Cover by John Gallagher
$3.99 | 32 pages, 6.25/10.18 | Full Color
Diamond Order# APR171503 The Frustrated Four— Human-Lizard’s arch-nemeses have been tearing Toronto apart, and only Lady Accident can see their real motives. While Lady Accident takes on these formidable foes, their pet monster, Johnny Bodyrocks, feels the stirrings of a new transformation.
Written and Illustrated by Jason Loo
Color Assists By Meaghan Carter
Cover By Jason Loo
$3.99 | 32 pages, 6.25/10.18 | Full Color
Diamond Order# APR171513 Lights! Camera! Action! That beautiful witch, Kitty Ravencraft, is in Hollywood to make a movie about herself, but someone is out to kill her again and it’s not just the critics! Kitty’s evil cousin, Katty and the mysterious, murderous Hexecutioner take their best shot at the magical redhead. Fortunately, she’s got friends like the fan-favorite family of freaks, the Carneys! Will Kitty survive her latest adventure? Will she make it into her own sequel? Grab the popcorn, hit the lights, and find out!
Written and Illustrated by Dan Parent and Fernando Ruiz
Cover A By Dan Parent
$3.99 | 32 pages, 6.25/10.18 | Full Color
Diamond Order# APR171506 Shaken from the traumatic events of last issue, Paz Gallegos– now the dreaded Fantomah– must race against the clock to track down her missing sisters. But as her powers continue to manifest, Fantomah finds herself pulled in new and deadly directions, sending her down a dangerous spiral from which she may never recover.
Written by Ray Fawkes
Illustrated by Soo Lee
Cover By Djibril Morrisette
$3.99 | 32 pages, 6.25/10.18 | Full Color
Diamond Order# APR171509 Life, Death and Sorcery— Volume One: 100 Days in the Future
Trade Paperback

The First Volume in the Acclaimed Series from Danny Zabbal! Follow the story of Amelia, Coco and Winnie, three sisters that run away from home and embark on an amazing adventure. A book filled with nuanced character moments and magic! It could be easily described as Buffy meets Love and Rockets. Freelance Volume One: Angel of the Abyss
Trade Paperback

Don’t miss this collected edition of FREELANCE! Lance Valiant, John Cabot, and Tasha Kolchak are fearless explorers who delve into hidden secrets of our world and protect us
from threats beyond imagination, but the greatest secret of all maybe Lance’s own mysterious past… The Crystal Key— The Wellspring Trilogy:
Book One
Novel

The sun has not shone in over a thousand years. Sixteen year old Felicity lives in a world where the Dark rules. Humanity stays to the Wellsprings, illuminated swathes of land where the light of eternal fountains keeps the skies bright all day long. But beyond that, the world is wrapped in eternal shadows, filled with monstrous Horrors who pray on the unsuspecting. When Felicity discovers that she is a Turnkey, a guardian selected to protect the Wellsprings, her life unexpectedly changes. Not only is she gifted with a magical Key with amazing abilities, but her fate soon takes her deep into the Dark where, with the help of a mysterious boy named Tobin, she must survive astonishing odds. For it is soon that the Horrors begin hunting her, and a race to get home is only the beginning of her worries. Don’ t miss out on the Crystal Key, book one of the Wellspring Trilogy.
Written by Robert William Gronewold
Cover By Cindy Leong
$13.99 | 350 pages, 5.5/8.5 BW | Soft Cover
Diamond Order# APR171505 The complete collection of the 1940’s comic-book hero— Johnny Canuck, returns for the first time since his final adventure in 1946! Ally, adventurer and flying ace, Johnny travels to countries and war fronts all over the globe to fight the Axis, even succeeding in punching Hitler not once, but three times! Dig into this incredible Hardcover collection of 28 issues and see why the CBC calls him the ‘Canadian version of Uncle Sam’!
Written and Illustrated by Leo Bachle
Edited By Rachel Richey
Cover By Leo Bachle
$24.95 | 128 pages, 6.25/10.18 BW | Hardcover
Diamond Order# APR171511 Kitty Ravencraft, a beautiful and magical young witch, is the star of her own popular comic book. When her greedy, publicity-starved publisher wants to increase interest in her comic book, he does what many comic book publishers do nowadays— he sets out to kill his main character, Kitty! Even worse, he decides to really spike sales by killing the real Kitty in real life! The question is though, how do you kill a witch?
Written and Illustrated by Dan Parent and Fernando Ruiz
Cover – Darwyn Cooke
$24.95 | 128 pages, 7.75/11.25 | Full Color
Diamond Order# APR171508