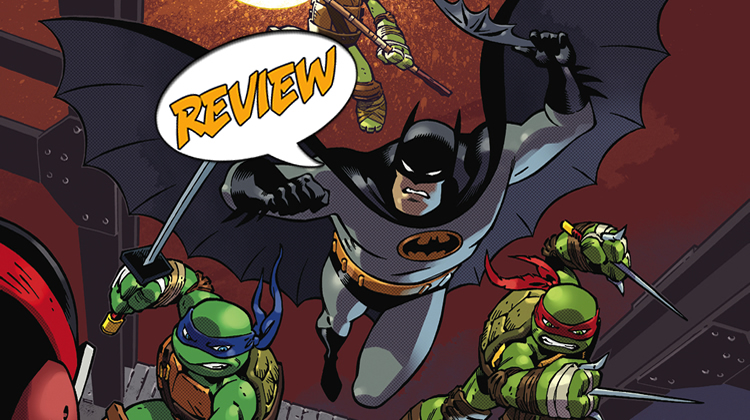 After the success of the regular Batman/Teenage Mutant Ninja Turtles crossover event, whoever thought of this version should get a raise!

Since both Batman and the Turtles have had successful animated shows, it really makes a whole lot of sense to bring those two universes together, and it’s great fun! To read Matthew Peterson’s review of issue four of this series, go to this link!

SOLICITATION: The surprising conclusion to the hit all-ages crossover! Surprising alliances are formed and friendships are tested as the villain behind the cross-dimensional chaos is revealed!

HAVING FUN WITH TWO UNIVERSES

Bringing two very divergent sets of heroes together can be tricky, especially with ones from cartoon shows. The expectations are high, and honestly, the comics don’t always deliver.

Not so in this case. I laughed and smiled all the way through. I think this series works no matter your age, from younger kid to “experienced” comics reader.

Probably my favorite sequence was when Michelangelo and Robin head through a portal to Gotham City, complete with that Turtle wearing something resembling a Batman mask. They then go through what clearly resembles the title sequence for Batman: The Animated Series for the next two pages, but not nearly as gracefully. That was very funny.

I have to give credit to Mr. Manning, who does an excellent job writing the dialogue for many of the characters, particularly those from B:TAS. I mean, I heard Kevin Conroy’s voice whenever Batman spoke, and the same for many of the other characters. Well done!

The story moves along at a rapid pace, much like cartoons need to in order to keep viewers’ attention. I always thought the Mad Hatter was one of the best Bat-villains, and he’s quite the threat in this issue. Of course, the Turtles have fun with all that as well, so it doesn’t get too heavy.

Another fun sequence takes place near the end of the issue, when Batman and his group decide what to eat after such a workout. They turn to the Turtles’ favorite food, which again made me smile. It’s that kind of “inside” humor that makes me enjoy this miniseries.

THE ART FEELS LIFTED OUT OF THE SHOWS

It’s critical that the art resemble what we saw on the small screen for this series to work, and it does superbly. The appearances of the various heroes and villains, as well as how they move, literally jump off the pages.

As far as my two most important qualities in comic art – expressions and action – they both sparkle in terms of helping us feel like we’re watching a program on the small screen. High marks!

Now, if you think this fifth issue in the series was the last one, guess again! Even though this is called a “conclusion” in the description, it’s not really the end! In early May, the sixth book will be out, and it’s something of an epilogue, so it should be as enjoyable as the series to date.

If you’re a fan of either shows, or both, I think you’ll find these comics so worth the buying and reading! If you weren’t on board previously, you can bet there will be a collected edition of this out before long! Or go digital!