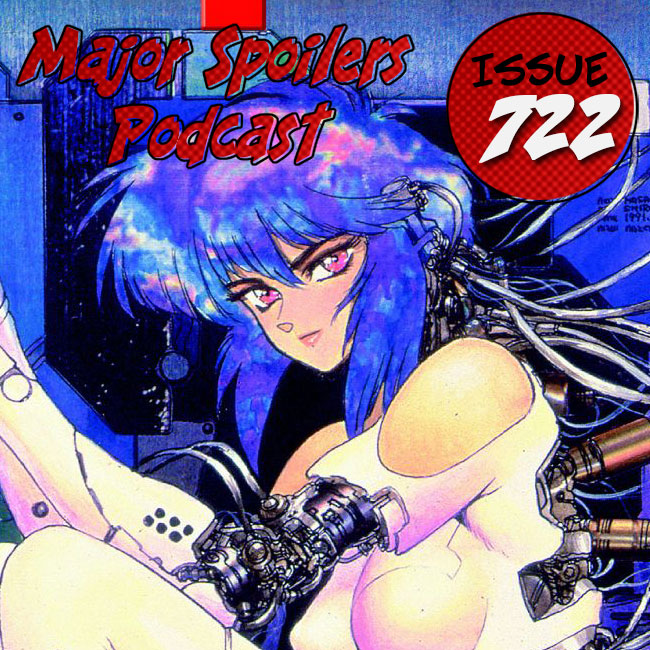 This week on the Major Spoilers Podcast: Ghost in the Shell makes us question our post-life choices, Mass Effect Andromeda is playable, Booster Gold The Flintstones Special #1 and Ultimates 2 #5 all get reviewed.

REVIEWS
STEPHEN
BOOSTER GOLD THE FLINTSTONES SPECIAL #1
Writers: Amanda Conner, Jimmy Palmiotti, Mark Russell
Art: Pier Brito, Rick Leonardi
Publisher: DC Comics
Cover Price: $4.99
Welcome to the twenty-fifth century, where the Earth is a polluted postindustrial nightmare, most animals are extinct and reptilian aliens are invading cities across the planet! In their time of need, the world’s citizens turn to the time-traveling Booster Gold to save the day. To learn why these aliens are seeking revenge, Booster dives deep into the prehistoric past to see what happened the last time they hit the planet. In this bygone era, Fred Flintstone and Barney Rubble must help Booster learn the truth and return to his own time armed with the information that will bring down the invaders-if Booster can convince them to help him. No problem-we all know how persuasive Booster can be, right? Right?!

And in the backup feature starring The Jetsons, in a new twist on an old twist about our future, The Jetsons live in a world of robotics and gadgetry. But how does dying change when grandma’s brain can be digitally imprinted onto a housecleaning robot?

MATTHEW
ULTIMATES 2 #5
Writer: Al Ewing
Artist: Travel Foreman
Publisher: Marvel Comics
Cover Price: $3.99
• Philip Nolan Vogt has a decision to make - one that will either save the Multiverse, or damn it forever to somewhere beyond hell.
• Philip Nolan Vogt is only human...
• Extra! At the end of this issue, you will know the name of the Cosmic Jailer. Heaven help you.

RODRIGO
MASS EFFECT ANDROMEDA
Publisher: Electronic Arts
Price: $59.96
Mass Effect: Andromeda takes players to the Andromeda galaxy, far beyond the Milky Way. There, players will lead our fight for a new home in hostile territory as the Pathfinder-a leader of military-trained explorers. This is the story of humanity's next chapter, and player choices throughout the game will ultimately determine our survival.

Major Spoilers Poll of the Week: Ghost in the Shell Edition

TRADE PAPERBACK DISCUSSION
GHOST IN THE SHELL
Writer/Artist: Masamune Shirow
Deep into the 21st century, the line between man and machine has been inexorably blurred as humans rely on the enhancement of mechanical implants and robots are upgraded with human tissue. In this rapidly converging landscape, cyborg super-agent Major Motoko Kusanagi is charged to track down the craftiest and most dangerous terrorists and cybercriminals, including "ghost hackers," capable of exploiting the human/machine interface by re-programming human minds to become puppets to carry out their criminal ends. When Major Kusanagi tracks the cybertrail of one such master hacker, the Puppeteer, her quest leads her into a world beyond information and technology where the very nature of consciousness and the human soul are turned upside-down and inside-out.