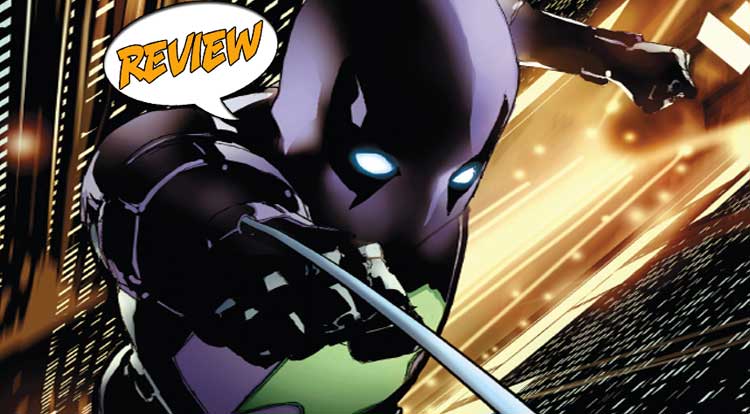 After a near-death experience and replacement by a clone, Hobie Brown isn’t entirely sure how to continue his career as The Prowler…  Your Major Spoilers review of The Prowler #6 awaits! Previously in Prowler: “Recently, Spider-Man asked Hobie Brown to investigate New U, a pharmaceutical company whose patient had started setting off his spider-sense.  Hobie infiltrated the company’s headquarters and discovered that one of Spider-Man’s oldest foes, The Jackal, was in charge of the operation and using his cloning technology to raise the dead.  Before he could relay the information back to Spider-Man, Hobie was discovered and severely burned by the new female Electro.  Fortunately, Jackal used his cloning tech to create a new, undamaged body for Hobie, giving him a new lease on life.  Dependent on The Jack for medication to keep his new body from decomposing, Hobie had no choice bu to work for the villain.  Thanks to the help of his allies and some quick thinking, Spider-Man stopped the Jackal, though many of the reanimated superhumans whom he had brought back to life did not survive the ordeal.

The clone of Hobie was one of them…”

We open in the offices of Peter Parker, where Pete and Hobie Brown are meeting to discuss what happens to The Prowler now.  As their discussions continue, we see possible futures for Hobie Brown: First up, one where he continues his activities and is killed in action with the Vulture.  After that, we see a world where an elderly Hobie is still active and living a life of squalor and desperation, followed by a time where he returns to villainy, only to be taken down by Spider-Man himself.  It’s unclear whether he and Peter are talking about theses realities (the dialogue implies as much, but the detail in the would-be worlds doesn’t feel like a casual conversation) or Hobie is imagining them based on what he and Peter are discussing, but as the issue ends, Hobie shakes his boss’s hand and walks away.  He returns home to his wife and children, and in the final panel, stands silently considering his empty Prowler gear, leaving the question of what happens next up for interpretation…

Having followed this book more intently than the main Spider-title, I’m a little taken aback to see this one suddenly wrap everything up.  Granted, the things that happened during the Clone Conspiracy changed Hobie forever, and it was unlikely that he’d be going back to being Peter’s body-double and bodyguard after what the Jackal did to him, but…  The suddenness with which this story wraps up is off-putting.  The art is very well-done throughout, though, albeit with some occasional inconsistencies in the story-telling.  Still, the homecoming is well-done, his kids are cute as heck, and the stories being told here are all interesting in different (occasionally terrible) ways, making for an interesting reading experience…

THE BOTTOM LINE: INTERESTING, BUT ABRUPT

While I’d prefer more Prowler stories to come, I’m actually sort of fine with having his fate up in the air.  After all, Hobie Brown’s career has been one of the more tentative of Marvel’s street-level heroes, starting and stopping and never quite hitting the big time, so having it end like this is thematically appropriate, even if I’d prefer something better.  Prowler #6 wraps up Hobie’s story for now, and does so with some interesting moments and even where the storytelling and art are inconsistent, it doesn’t alienate me as a reader, earning an well-deserved 3 out of 5 stars overall.