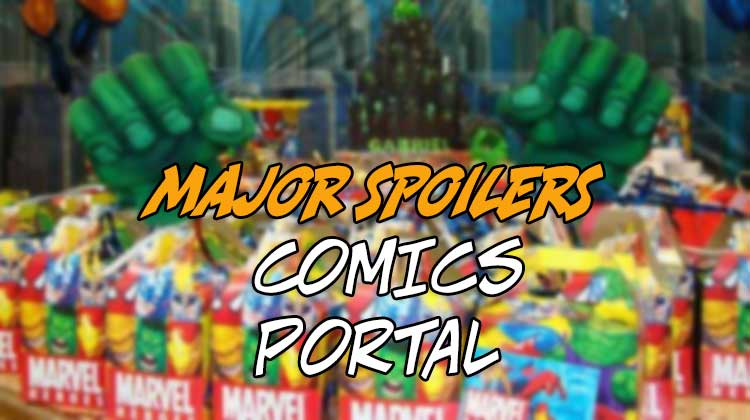 As reported here at MajorSpoilers.com on Thursday, Marvel’s throwing a party and inviting you to attend!

It all has to do with the upcoming “Secret Empire” event, which will follow the “Monsters Unleashed” event. That one came after many other events from the House of Ideas – so many, in fact, that it would likely fill up this entire column to list them all!

Okay, back to what I was really talking about: Time to celebrate new comics by going to a party! I’ve noticed in the past few years that launch parties are happening more and more. They usually indicate something BIG is starting.

If you’ve never been to one before, it’s a fun time to get in on the ground floor of an important book or series of books. Many of us with friends who also enjoy comics attend together. There are often exclusive comics, posters, pins and other promotional items.

Are these items collectible? Apparently, but I never keep them unless it’s something I want to have rather than store away for sale later. But whatever floats your boat!

It depends on the store as to just what time it takes place or if there’s music playing in the background, for instance. Not every place is high tech, after all!

They can take place at all hours of the day or night. The recent DC Rebirth kick-off I attended started at midnight on Wednesday, the day the first book was released. There was a long line waiting to get in as well as many different variations on that comic for sale. They needed two registers to check people out. Fun!

Again, not every store can do that. Often giveaways will be handed out when most people come to their LCS to buy new books. Being open longer or weird hours takes employees or owners who can function during those times of day, which not all of us can handle.

The purpose for launch parties is to attract attention to, again, something BIG happening. It also makes it easier for comics fans to know what to get when. Stores can make good money with these happenings, and that’s good for the industry, honestly.

WHAT NOT TO DO

Over the years, there have been attempts to run this kind of party at many different stores I’ve gone to. Not all of them were conducted wisely. My first suggestions is: Don’t serve food. There was a great store I used to go to that decided to throw a wedding party for Peter Parker and Mary Jane. As part of the celebration, they gave out pieces of wedding cake. I have to admit that giving kids cake is likely to wind them up even more than usual, which it did.

Years later, they were still wiping away remnants of cake from racks and comics pages. They swore never to do that again. Smart move!

Also, I’m still uncertain that serving alcohol at a comics event is a good idea!

My second suggestion is: Don’t get caught unprepared. It’s really tough when things don’t go according to plan, especially with comics fans. We want what we want when he want it, and if a store has set up certain expectations, well, you really should make sure they happen.

One store I went to was overwhelmed by the buyers who attended an event. They had long lines and new people at the cash registers. It took what felt like was forever to get your books and rush out the door. Add to that, the new people didn’t know anything about comics condition, so you could hear the moans of anguish as a spine was bent during check-out.

What should have been something that attracted new customers and make regulars happy turned into a disaster. That LCS didn’t last much longer after that happened.

I’ve also been to stores who advertise that certain items will be there during a launch party. If you don’t make sure you’ll have those things in hand BEFORE the day of the event, you’ll most likely drive people to other establishments who DO have them.

Finally: Don’t be unfair when distributing special items. I know it’s great to save things for kids, but these days, comics are purchased most often by adults, and not always young adults, either.

I was at a store where the owner refused to give any pins to an adult unless it was for a child. Kids got as many as they wanted. Yeah, that made people unhappy. Some even ran to a friend’s home to “borrow” a child so they could get a pin. I just hope that kid didn’t get too attached to it.

When you have to restrict giveaways, that’s a big clue for you to order more when you have another event. Really.

On the other hand, please be patient if things don’t go quite as planned. Nothing impresses a comic shop owner more than you being flexible. If he or she can make it happen, they’ll get you what you want, though it may take some time. Launch parties are like mini-conventions in that customers have the chance to mingle with other fans, possibly gaining new friends. And as a long-time comics fan (I hate the word “geek”), I’ve come across some great buddies during these events.

I was standing looking at Spider-Man in his new, black costume. (Yes, it was that long ago.) I expressed my unhappiness with it, and the guy standing next to me started talking with me about it. When the store closed, we continued our conversation for an hour longer, and he’s still a friend of mine to this day.

Encouraging conversations is something stores can do for their customers that doesn’t cost anything. But it can be a life-changing experience. Someone might actually disagree with you in such a way that it changes your mind. Gasp!

It’s also important to be clear regarding the details of the party. Many customers are now on email lists, and they’re helpful in letting us know what’s going on, and when. If your store doesn’t have one, be sure to encourage them to set up a list like this. A special email noting what we can expect at the party lets us know that we might need to get there early, or even bring more money!

What makes launch parties so appealing is that they’re fun events! And we could stand more of that kind of thing these days, I believe.

I always try to pay attention to people who like to disrupt events. Honestly, I think every store has a customer something like this. You work hard to make something happen, and all they do is criticize what you did. It’s never good enough for these folks, seems like!

With that kind of person, I think asking questions helps. Ask him or her, what books are you reading? What do you like? If you can get them in a positive frame of mind, it’ll make a huge difference how the event goes.

Some stores run games during events, and that’s cool for those people who love to play them.

Laugh a lot. I know that sounds rudimentary, but you’ll be surprised how it keeps the atmosphere light.

What do you think? Do you enjoy launch parties? What suggestions do you have to make them successful? Will you be going to the Marvel “Secret Empire” event taking place near you? Whatever your opinion, please share your thoughts in the space below!