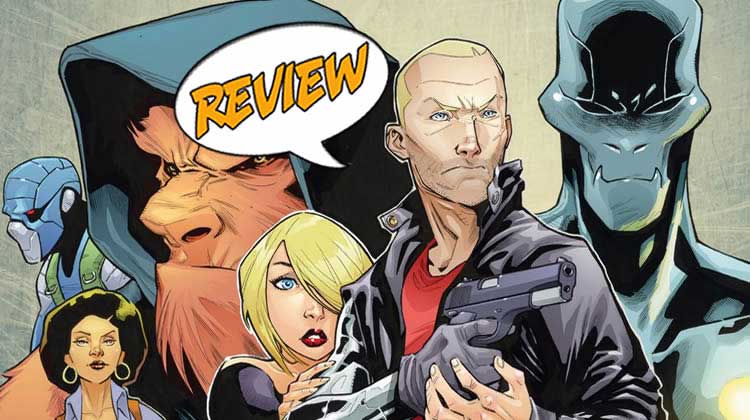 As a young child, I was both fascinated and terrified by Bigfoot. I sought out every bit of information I could about this unusual being. I mean, it was a complete mystery to me, which meant I couldn’t tell what it would do, should I ever encounter it. Ah, the belief of a young child, thinking literally anything was possible, including meeting a monster not seen within thousands of miles of me.

That sense of wonder and terror is captured superbly in Shelter Division, a new comic that brings several of the most impossible creatures and beings together to stop evil.

SOLICITATION: A mastermind is plotting to conquer our very existence… the government has recruited the most abnormal beings to fight this abnormal threat… and those who were the investigated will be given shelter… and become the investigators. Within the shadows of our society, these outcasts will need to push back against the darkness… or there will be no shelter here. It’s the story of one mysterious man named Emrik Chaplin.

Originally a web comic, Shelter Division assembles the unusual together to accomplish what the rest of us likely could not – defeating a serious baddie. It feels like the X-Men’s mutants, but in a more realistic way. I never could buy that most of the people working with Professor X looked like teen models even though they had odd abilities. Shouldn’t an arm be sticking out of someone’s head or something? In this comic, these strange and wonderful characters often do NOT look like gorgeous teen guys or gals. Still, there are some who are pretty good looking, especially the ladies.

Hey, this is a comic book, after all!

My favorite is “Biggs” their name for the aforementioned Bigfoot. He’s tall, feral, strong and quiet, and he seriously taps into my childhood perceptions. He’s seen in a cage in this issue, so the wildness of a forest animal is projected as well. Yeah, those shivers are back, and how!

I also like Roswell, an alien aptly named after the alien visitation in Arizona decades ago. His understanding of science is far advanced, so when he’s presented with a bit of technology, his response is a bland, “Oh, yeah. That thing.” Tall and lanky, he’s dangerous in a scientific, mental kind of way.

The central character of the book is Emrik Chaplin, who has a metallic right arm, among other things. He’s the leader of the bunch, and we’ll see if he even survives this issue!

The pacing is quick, balancing between character moments and action. I never knew what was going to happen next, and that’s fun for an experienced comics reader like me! I also like the redacting of words that often appears on the cover and elsewhere.

Of course, Bob Salley is known for his previous comics series’, including Salvagers and Jasper’s Starlight Tavern, both engaging series’.

THE ART FITS THE MOOD

I really like Tomaselli’s art, which is clear and dynamic. Expressions are well done, and the action is portrayed very strongly. There’s a bit of cragginess to his art to go with the sharp details, and that works well with the dark and moody story.

The colors are also very appropriate, with more subtle tones, even among the brighter sequences. There are lots of dark colorings to faces, and that helps portray the characters’ feelings. Well done!

Source Point Press is a cool company that focuses largely on horror titles, and they do a great job with them. Shelter Division fits in well with their other books.

Horror and suspense are often difficult to convey, I feel, especially in comics. There is no haunting music in the background, and no live actors to be drawn to. The art and story must pull us in and hold us so the story can be told. And this comic does this very well!

Shelter Division is an excellent title in the way it makes us want to know more about the characters we meet as well as make us want to know just what is going on here! I understand this is Mr. Salley’s first venture into this genre and, given this issue, I expect many more stories along these lines will terrify and grip us in the time ahead.

To read a primer for this title, you can go to this link. Since the recent Kickstarter project was successful, you can expect to receive your rewards soon if you were a supporter. I’m positive this book will be available through Source Point Press in the months ahead as well, so be sure to keep an eye out for this launch of a powerful horror mystery, something we need more of, I believe!