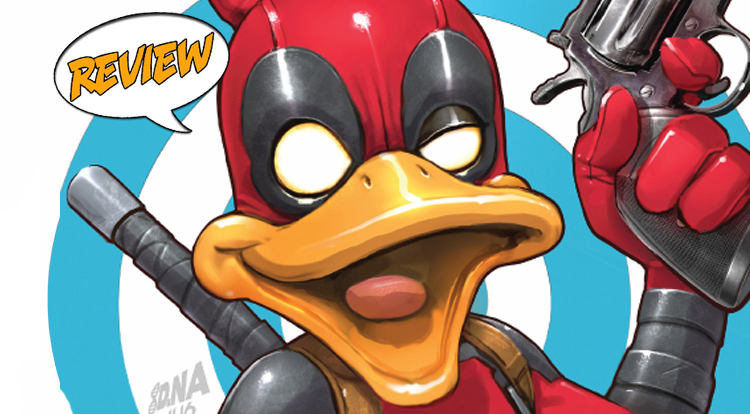 Howard and Wade have been merged into one being, and time is running out to separate them.  Will Marvel let two of their biggest cash cows stay in one duck-body?  Your Major Spoilers review of Deadpool The Duck #5 awaits! Previously in Deadpool The Duck:  “After noticing an extraterrestrial approaching Earth, SHIELD sends Deadpool to investigate.  Meanwhile, Howard The Duck is on the road, going nowhere in particular, when Rocket Raccoon falls from space into his car.  Rocket’s been infected with a mysterious disease called “space rabies,” causing him to attack Howard.  Deadpool arrives just in time to battle Rocket, but when Rocket bites Deadpool’s teleporter, it causes Deadpool and Howard to merge into one being…  Deadpool The Duck!  Turns out that Rocket’s Rabies was actually Roxxon nanotech gone wrong and it only took a massive shootout between SHIELD and Roxxon to figure it out!  While Rocket was cured, unfortunately the machine that fixed him was a casualty of the firefight.  To make matter worse, Agent Mary’s mom/major power-tripper/Roxxon Security chief Basalt, who’s been on the team’s tail (literally) is working with Doctor Bong…”

NOT FOR THOSE WITH WEAK STOMACHS

The fact that Dead/Howard is a perfect hybrid of human and animal has attracted the attention of the good Doctor Bong, who wants to use our hero(es) to fulfill his lifetime work.  At the same time, the realization that there are no more nanobots in Rocket’s body to reverse the fusion brings Agent Mary of SHIELD to the revelation that hangs at the heart of this issue: Four issues ago, Deadpool the Duck threw up upon his merging, and that vomit is chockful of nanotechnology.

It’s gross.  Especially the utilization of said emesis remnant to begin to unmerging process, which involves a spoon…

Gyaah.  Not cool, Marvel!  Before that can continue for more than three pages, though, Doctor Bong arrives for a climactic battle, leading to our heroes becoming separate once again.  As the story ends, Howard has returned to SHIELD for his receptionist gig, returning to his life of quiet desperation (with occasional flashbacks of the wonderful violence of being Deadpool.)

NOT BAD WORK ON THE ART

The real star of this issue is the art of Jacopo Camagni, which imbues everyone with charisma and engaging facial expressions, and even makes the scene of our hero eating puke somewhat less awful.  As far as the plotting goes, this issue and the overarching miniseries share the same problem: The “What does it all matter?” factor.  There are some cute moments, but the five issues end up being a total Shaggy Dog story with no point.  The intent is to make it all feel like a madcap cartoon adventure, and that does come through here and there, but not consistently, and the story suffers for it.  Having two villains in play also seems senseless, unless it would be to set up future stories, something that seems unwise for a five-issue limited series.  The sight of Doctor Bong makes up for a number of sins, but there’s still an aimlessness to it all that undermines the reading experience.

THE BOTTOM LINE: IT HAS ITS MOMENTS

In short, the whole point of this was “two characters have wacky adventures in one body”, and they make good on that premise, and even the gross-out factor will appeal to a certain segment of Deadpool’s regular reading audience.  Deadpool The Duck #5 wraps it all up, with some wobbles in art and story but a lot of energy and drive, for a better-than-average 3 out of 5 stars overall.  Howard is cool, Deadpool is cool, and if you don’t mind that is just sort of… ends?  This issue is your jam…

Frenetic and gross, mostly in a good way, with some nice character work in-between...