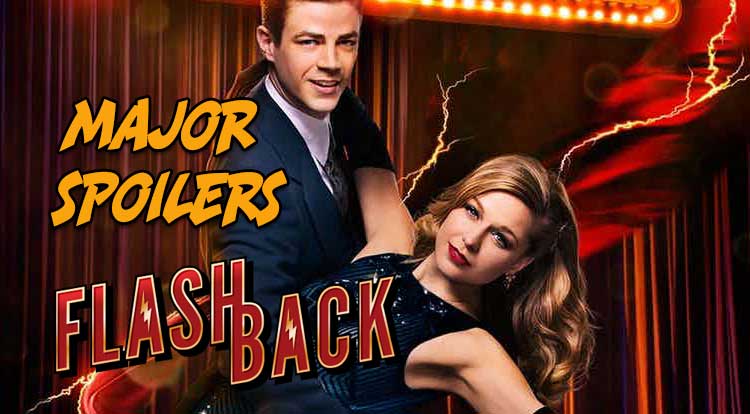 It’s a musical! It’s a crossover! It must be a Duet! Take the jump for a look at the inspirations for this week’s episode of The Flash. DARREN CRISS (“GLEE”) GUEST STARS AS THE MUSIC MEISTER IN THE FLASH AND SUPERGIRL MUSICAL CROSSOVER – Barry (Grant Gustin) and team are surprised when Mon- El (guest star Chris Wood) and Hank Henshaw (guest star David Harewood) arrive on their Earth carrying a comatose Supergirl (guest star Melissa Benoist) who was whammied by the Music Meister (guest star Darren Criss). Unable to wake her up, they turn to Team Flash to save her. However, the Music Meister surprises The Flash and puts him in a similar coma, one that Team Flash can’t cure. Kara and Barry wake up without their powers in an alternate reality where life is like a musical and the only way to escape is by following the script, complete with singing and dancing, to the end. Yes, yes, we all know Neil Patrick Harris should have been the Music Meister in this episode, but let’s face it – he would probably cost more than the entire production budget at this point. Still, we wouldn’t have the Music Meister without NPH.

The Music Meister didn’t appear in comics until The All-New Batman: The Brave and the Bold #16, written by Sholly Fisch with art by Rick Burchett.

As you might expect, the Music Meister has the ability to make anyone within the sound of his voice burst into fits of singing and dancing. So, if you ever come across the Music Meister, you better have a pair of earplugs handy.

The Music Meister was created by Michael Jelenic.

Also known as Superboy’s Older Brother, Mon-El first appeared in Superboy #89 (June, 1961) when a rocket crashed to Earth, and the occupant inside had lost all memory of who he was or where he came from. Because the teenager exhibited similar powers to Superboy, Kal-El assumed he must be his long lost big brother from Krypton, and named him Mon-El (Mon, because he landed on Monday, and El from the House of El).

Unfortunately, Superboy condemned his “brother” to death after Clark exposed him to lead.

You see, Dear Reader, Daxamites are deathly allergic to lead, and upon the exposure, Mon-El’s memory returned. He explained he was really Lar Gand from Daxam, and before Krypton exploded, Jor-El had given him a map to Earth.

In order to save Mon-El, Superboy sent him to the Phantom Zone – a place where he would not age, and he would not die from lead poisoning. Years later, Mon-El would be freed from the Phantom Zone, given a cure, and become a member of the Legion of Super-Heroes.

If you want to learn more about Mon-El, make sure you check out this special episode of Legion Clubhouse, where we break it all down, and figure out why siblings don’t get along.

With all the signing and dancing going on, let’s not forget where they came from.

The Flash 3×17 Featurette “Behind The Songs” (HD) – Musical Crossover

Singin’ in the Rain

Opening this episode is one of the greatest clips from one of the most recognized movies of all time. Singin’ in the Rain was released in 1952, and was directed and choreographed by Gene Kelly and Stanley Donen. The movie stars Kelly, Donald O’Connor, and Debbie Reynolds, and tells the fictional story of how the talkies came to Hollywood. If you haven’t seen it, you really should. It is a life changer.  Unfortunately, the one time we recorded a Zach on Film episode about Singin’ in the Rain, we lost the recording, and thus one of the greatest conversations about this film of all time.

The Wizard of OZ

Kara mentions clicking her heals together three times to get home, which is definitely a reference to The Wizard of OZ, the 1933 musical from MGM. Considering we discover The Wizard of OZ was a childhood favorite of Kara’s and that this plot is being put together from the memories of Barry and Kara, the nods work perfectly.

There have been five Wizard of OZ films that have been released, but none are as famous as the 1939 version with Judy Garland, Ray Bolger, Jack Haley, Bert Lahr, Frank Morgan, Billie Burke, and Margaret Hamilton.

West Side Story
What happens when two warring factions discover their children are in love with one another? You could make a play from it, but if you are doing a musical episode, West Side Story is a perfect fit. It is also interesting to note that Mayhem of the Music Meister also had a similar vibe.

The movie, adapted from the Broadway musical of the same name, was directed by Robert Wise and Jerome Robbins.  Released in October 1961, the movie stars Natalie Wood, Richard Beymer, Russ Tamblyn, Rita Morano, and George Chakins.

Kara opens the musical adventure with her take on Moon River, the song made famous in the 1961 rom-com Breakfast at Tiffany’s. The film stars Audrey Hepburn and George Peppard, and one two Academy Awards: Best Original Score and Best Original Song for Moon River.  Henry Mancini composed the song, with Johnny Mercer writing the lyrics. Because of how great the song was, Mancini won the 1962 Grammy Award for Record of the Year, while Mancini and Mercer walked away with a Grammy for Song of the Year.

Put A Little Love in Your Heart
The big opening number from this week’s episode is definitely a big song and dance number, and having Jackie DeShannon’s 1969 hit literally spell out the solution to the heroes’ problems.

More I Cannot Wish You
There are so many great moments in this week’s episode, and this musical number from Guys and Dolls sung by Jesse L Martin, Victor Garber, and John Barrowman is certainly near the top.

The Flash 3×17 “More I Cannot Wish You” Joe, Martin, Malcolm

Super Friend
This was one of the two original songs written for the episode. It was written by Rachel Bloom and Tom Root. Yes, THAT Rachel Bloom star of Crazy Ex-Girlfriend, and creator of one of my all time favorite song, “Fuck Me, Ray Bradbury.”

I did like nods to Barry screwing up the timeline and Superman overshadowing Kara in this bit. Plus who didn’t think the name of the song was Super Friends?

Runnin Home To You
The other original tune for Duet; this one was written by Benj Pasek and Justin Paul. Yeah, you know, the duo who wrote A Christmas Story, Dogfight, and most recently, their songs were featured in La La Land.

“Running Home To You” – The Flash/Supergirl Musical Crossover

If you have been following the Flashback Podcast, you know I’ve been a little sour on The Flash these last couple of weeks because of what I believe to be weak storytelling and a lackluster moments in the show. This song, coming at the show’s finale, redeemed the entire season for me.

I predict this song will be the next big first dance song for those getting married for the next 20 years. If it isn’t, it should be. Did you notice the Thurston magic poster? Turns out Howard Thurston was a real magician who lived from 1869-1936. Thurston – The King of Cards – was regarded as one of the greats of the time, creating tricks like the Rising Cards, and the Levitation of Princess Karnac.

In the history of magic, perhaps Thurston’s greatest legacy is his inclusion in a line of magicians dubbed the “Royal Dynasty” of magicians. This Royal Dynasty has maintained continuity since Harry Kellar by the ceremoniously passing of the “Mantle of Magic”. In order, they include Harry Kellar, Thurston (1908-1936), Dante (1936-1955), Lee Grabel (1955-1994) and Lance Burton (1994-Present). Thurston is quoted as a subject matter expert in Dale Carnegie’s book How to Win Friends and Influence People.

It is interesting that there are posters all over Moran’s Nightclub for Thurston the Great Magician considering Abra Kadabra is the title of next week’s episode.

And that should be everything! What did I miss? What did you catch? Use the comment section below to share your thoughts on this episode, and until next week remember – Sing, Barry, Sing!