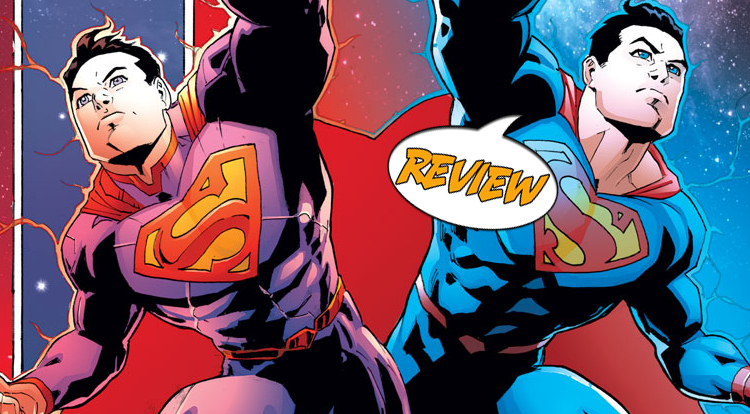 Something strange is happening in Metropolis…

As always, the odds are even that Mister Mxyzptlk has something to do with it all!  Your Major Spoilers review of Action Comics #976 awaits! Previously in Action Comics: Having replaced his New 52 successor, the Pre-Flashpoint Superman (along with wife Lois and their son, Jon) have returned to Metropolis.  Unbelievably, another Clark Kent has popped up as well, even though Superman’s secret identity was outed before his untimely death.  It’s almost like… magic?

We begin with a terrifying visage of the fifth dimensional imp, pointing and threatening Superman, after forcing the Man Of Steel to fight his way through a virtual hell of mirrors to get to the top of the Daily Planet building.  Unfortunately, Superman and Lois have both reverted to their New 52 incarnations (Jon Kent even asks Superman if the collar hurts, which I consider to be a wonderful joke/Take That by Dan Jurgens) and don’t remember Jon’s existence.  Mxy prepares to take the boy with him back to the fifth dimension, leaving this new reality with the Superman it started out with, but Jon/Superboy pleads with his mom and dad to remember him, to remember their marriage and the reality they came from.  Thanks to the energy ghosts of his Pre-Flashpoint parents, Jon convinces them, and the two Supermen and Loises merge in a strange meta-textual moment.  The mysterious Mr. Oz, watching from afar, remarks that, by doing so, they’ve created a new reality in and around Superman (and his supporting cast) that merges/streamlines/something something timequake their worlds into one, new unified Superman continuity…

THE NOTCHED BOOTS ARE BACK!

…one that has a decent looking super-suit that eschews the pointed collar and returns the iconic notched boots!  The writing in this issue is unusual for a number of reasons: It’s basically a “Fix Fic”, allowing Jurgens to recreate the Superman he wrote back in the day.  But, it also wants to work as a Superman Vs. Mxyzptlk story, and as such it sort of fights against its own influences.  Indeed, Mxy just up and leaves the book halfway through, marooning Superman, Superboy and Lois in a ruined world atop the Daily Planet (another bit of meta) until their love/determination pulls them back to reality.  The last pages have Mr. Oz musing on whether Superman’s will is actually the one in charge here, but the parallels (and references) to the editorial decisions of 2011 are overt and hard to work around.  Mahnke’s art is strong, though, and the full-page reveal of Superman remastered is well worth the price of admission for me, and I have to say the joyful expressions on the Kent Family’s faces as they leap/fly home at the end of their journey are pretty wonderful.

THE BOTTOM LINE: EMOTIONALLY ENGAGED, BUT A BIT… FORCED?

As with any story whose primary function is revising the story as written thus far (See: Avengers Forever, Crisis, Zero Hour, et al) the balance of in-universe to out-of-universe is key, and Jurgens does an okay job of making it work.  He is not up to the task of hiding all the metaphorical men behind the curtains, though, and after reading, it seems clear that the idea of fixing continuity was the most important part.  Still, Action Comics #976 manages that point with such a clear affection for Superman and his cast that I can overlook any of that, especially since Superman looks like himself again and his happy family is reunited, leaving the book with a better-than-average 3.5 out of 5 stars overall.  Even Clark’s secret identity is restored, and it does that in a way that makes more sense than any other reversion of that plot point in recent comic memory…

A mini-Crisis on a couple of Earths leading to what may be a whole new Superman? Yeah, okay.