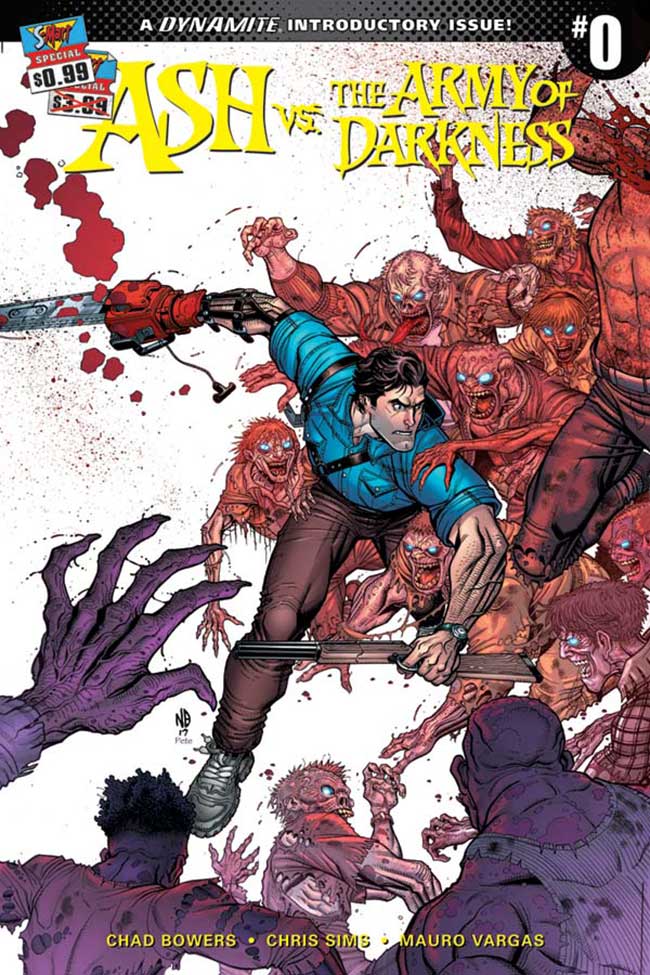 Dynamite Entertainment has announced a new Ash vs. The Army of Darkness series from Chad Bowers, Chris Sims, and Mauro Vargas, is coming our way. The first issue (a #0 issue) will have a cover price of 99-cents.

For 25 years, Ash Williams has been waging a war in film and comics against the Army of Darkness. Now, Dynamite Entertainment is proud to present the next thrilling chapter, kicking off in this special prelude! Ash may be the Chosen One, but that doesn’t mean he can hold down a steady job at S-Mart. When he’s scrambling for employment, will he find himself once again thrown into battle against the Deadites? Here’s a hint: The book ain’t called Ash: The Guy With A Regular Job Who Doesn’t Battle Against The Forces of Evil.

“Army of Darkness, and really Sam Raimi’s entire filmography, is such a major influence on how we approach storytelling,” said co-writer Chad Bowers in a prepared statement. “Being turned loose inside that sandbox and having a chance to add to the AOD mythology feels like something we’ve been working toward for years, and hopefully it reads that way, too. And I dare anybody to tell me Ash Williams isn’t the toughest ass-kicker in horror! What he lacks in brains, he more than makes up for by having a chainsaw for a hand. That’ll get you a long way in this world!”

“I saw Army of Darkness when I was nine, and I’ve literally described it as a life-changing experience. It might’ve been the most influential movie I’ve ever watched — in terms of the stories that I like and how much I love smartass everyman heroes that stumble into having to do the right thing — and almost everything I’ve written has had a variation on that idea kicking around in it,” said co-writer Chris Sims. “One of our big goals whenever we sit down to write a new story is to keep things moving fast enough that nobody has a chance to get bored, and with Ash, escalating those situations was so much fun.”

Nick Bradshaw (a favorite of mine) will art the heck out of the cover for the issue. Dynamite says there will be numerous variant covers retailers can order by J. Scott Campbell, Reilly Brown, Mauro Bargas, and Pasquale Qualano.

Ash Vs. The Army of Darkness #0 will arrive in June.