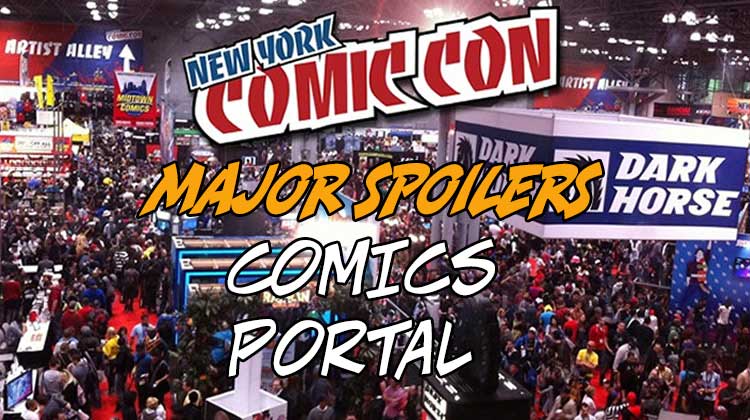 This past Friday, I received an email that caught not only my attention, but also many others who go to New York Comic Con, arguably the most-attended comics convention each year.

There will be several changes, not all of them ones I’m in favor of. Let me react to what’s going on. Here’s what mattered the most to me: “We will only be selling single day Thursday, Friday, Saturday, and Sunday Kids tickets to NYCC 2017.”

Why are they doing this?

“You may or may not know that the Javits Center is going to be under construction. This means we’ll be working with some space limitations, and we want to make sure as many people have the opportunity to buy a ticket and come to the show as possible. Selling only single day tickets will give more fans the chance to buy a ticket for at least a day to experience the fun of NYCC.”

During 2016, I attended more conventions in one year than I ever had previously. What I noticed happening a LOT was many convention centers being under construction. This made several of them tough to attend, much less sell one’s wares at.

I often hear that this economy isn’t doing all that well. I question that notion given all the money being spent on upgrading multiple convention locations.

The trick is, this kind of thing often drives con-goers away. I could name names, but I can think of a few cons I was at last year where construction was underway, and not nearly as many people attended them, which resulted in many of the vendors promising they wouldn’t be back the following year.

Not only that, but four-day passes really make going every day much more likely than having to buy a separate ticket each day. Granted, by the end of the con, these folks have likely spent all they’re going to, but even then, many of them haven’t seen all they’d like to see by the close of the convention on Sunday. NYCC is just that huge!

What I hope is that this is a temporary development. I’d love it if, in 2018, they get back to selling four-day passes again. If not, I think you’ll see a serious decline in attendance.

Please don’t misunderstand me. I DO want as many people to be able to get to NYCC as possible. So I’m going to be okay with this development despite my misgivings about it. Also, this may prompt attendees to spend as much as they can instead of holding back until the last day they attend. I’d seen many folks stop by booths, only to say, “Well, I’ll be back again tomorrow. Maybe I’ll buy what you’re selling then.”

I didn’t hold my breath waiting for that to happen because, often it didn’t. Granted, that’s their right, but I’d recommend that if you really don’t want something, tell the person you’re talking with the truth. It’s worse to have people hoping you’ll be back like you promised to! Really!

I wonder if this will impact the number of press passes they distribute as well. Hope not because I often come back with a lot of great interviews for my podcast from NYCC!

It will be interesting to see how this impacts the 2017 version of the con. Will there be fewer people attending? Will it put a crimp in what has been one of the very biggest (and often best) conventions of the year? Stay tuned, we’ll see together!

TICKETS ON SALE OVER THE WEEKEND

Ticket sales will NOT begin during the week in 2017. Here’s why they’re changing that: “This year, tickets will go on sale during the weekend. We polled our Facebook event, and you answered, saying Saturday and Sunday were the best days for us to launch tickets. We’ll do what we can to choose the most requested day and used the second choice as backup.”

Okay, I buy this. When ticket sales begin on a weekday, many folks who want to buy them are at work during the day. That means they have to put their heads down and try not to be noticed if they want to get tickets asap. You do this enough times, and your supervisor just might notice, leading to big trouble.

The weekend is when most, but not all, people are more likely to have time to buy the tickets they want. Again, given that this year you have to buy multiple tickets if you want to attend more than one day, that still could be a tough process.

I just hope that more people being able to buy tickets doesn’t make the system crash. THAT would be a disaster! As with most years at NYCC, Fan Verification is part of the process. You need a profile in order to buy a ticket.

Here’s how it was explained: “Fan Verification will be open on April 19, 2017, for anyone who didn’t create a profile last year. Anyone who fills out a Fan Verification profile will have access to the limited quantity ticket on-sale at a later date.”

The good news is that, if you made or had one in 2016, it will still be good this year. In fact, folks with 2016 Fan Verification Profiles will get first crack at a limited number of tickets. I like that they’re giving folks who have been there last year some advantage for this year.

However, you must confirm or update the details in your profile! Very important, they say!

And we haven’t even begun to hear who the guests will be!

WILL THIS BE HOW MORE CONS WILL OPERATE?

As I often like to point out, comics conventions are BIG business, especially these days. I’m not sure this will continue for much longer, but given the fact that fans are pretty devoted to face-to-face opportunities to meet the creators they like, I’d thinks so.

What convention organizers have to be careful about is making the process too tough for people to get through. And also limiting what fans can do and how often they can attend. You make it too difficult, and you’ll see things deteriorate, and in a hurry!

I’m always torn about whether a con should relocate while construction is happening. The good thing could be being in an environment that doesn’t hinder fan participation. The bad things include fans having trouble finding the new venue or facing problems knowing just where the convention is from year to year, as well as finding a space large enough to contain a convention. Again, you could drive fans away if it’s too constricted an environment.

But I think we’ll see more and more conventions face difficulties in the future. More and more organizations are holding cons like the ones comic fans enjoy, and that means convention space will be more and more expensive while being less and less available. Yikes!

Still, what NYCC is doing this year might be an indicator of what we can expect in the coming years – conventions taking place in situations that fans need to pay attention to, and how!

For more information on this, you can attend a Facebook Live Q&A taking place today, Monday, March 20, at 3:30 p.m. ET. Here’s the link to their page. And NYCC will be held this year from Thursday, October 5, through Sunday, October 8.

What do you think? Do you think what NYCC is doing this year will hurt their attendance? Would you limit the number of days you go so others might be there? Are conventions too tough to support already? Either way, please share your thoughts in the space below!