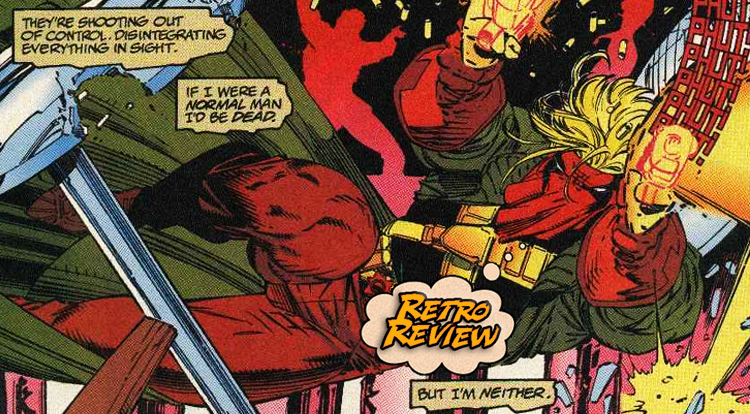 With The Wild Storm returning to comic stands, it seems like as good a time as any to look at the cornerstone of what would become Wildstorm Comics.  It’s the story of what happens when seven strangers from space put on costumes and stop being polite…  but start getting wild.  Your Major Spoilers (Retro) Review of WildC.A.T.s: Covert Action Teams #1 awaits! Previously in WildC.A.T.s: Covert Action Teams: Having begun his career a few years earlier on ‘Alphas Flight,’ Jim Lee was one of Marvel’s biggest stars circa 1992.  After a successful run on X-Men, including launching the million-selling (*coughtotheretailerscough*) adjectiveless X-Men title, he left Marvel to join several other superstar artist types in forming Image Comics.  Having cut his teeth on action, attractive women and life-or-death battles, Lee’s first work at Image was in a similar vein, an action ensemble super-group with an impossible to Google name: WildC.A.T.s!  This is their story…

We open somewhere in the frozen north, where sinister scientists fight a strange silvery woman for possession of an orb of unknown provenance.  Then, we leap to the gutters of New York City, where we find a man called Jacob Marlowe, living rough on the streets.  When men with villainous intent arrive to attack and/or murder him, the same silver woman saves the day… Another smash-cut forward in time, and Jacob Marlowe is the billionaire CEO of HALO Industries, with Adrianna/Void/silver mystery woman as his primary advisor.  She reminds him that he is the Lord Emp (although what that means is left unspoken) and that together, they can recapture the orb and fulfill his destiny.  Elsewhere in the lovingly-drawn city, the evil Helspont (who claims to be the one who paid Judas Iscariot to betray Jesus, the sure sign of an inexperienced writer just throwing stuff at the wall) searches for Lord Emp and also “the one with the sight” who can bring down his conspiracy.  That one turns out to be Priscilla Kitaen, a stripper who goes by the stage name, Voodoo… I haven’t been in many gentleman’s clubs, but I’m almost certain that the performers don’t wear full superhero costumes with headdress and furry boots…  but I could be wrong?  Either way, Lee’s art is energetic as a full-scale aliens versus supers battle breaks out on the floor of the Lusty Leopard.  Fortunately for Priscilla, the mysterious masked gunman known as The Grifter has been enjoying her set… Still, a full cadre of what are repeatedly referred to as “Coda Assassins” are too much for Grifter to handle alone, certainly while protecting a screaming and utterly bewildered ecdysiast.  Cue the backup! Spartan!  Warblade!  Maul!  (Of course, the fact that Maul has tusks on his back, size-shifting powers and a general elephant motif makes it clear that his name was originally ‘Mammoth.’)  Of course, Lord Emp coming along without any powers leads to a hostage situation almost immediately. Spine not included.  (I shouldn’t be too cruel, as Lee’s anatomical constructions are actually not terrible, aside from all his women having really looooooong legs and enormous breasts.  Given that his peers include Rob Liefeld and Todd McFarlane, it could have been much worse.)  It turns out that Emp’s forces, Grifter and Zealot didn’t actually coordinate their efforts, but they all have the same goal: Protect Voodoo from the evil forces of the Daemonites, whatever those are… And, of course, having seemingly pulled their fat out of the fire, the WildC.A.Ts are dealt a massive setback in the form of the old “blow up the whole city block” routine.  Classic… As the book fades to black, with the heroes seemingly blown to smithereens, we cut to a gloating Helspont, collaborating with his most powerful lackey…  DAN QUAYLE!

C’mon, you knew nobody could be that dense and get elected to high public office, right?  Oh, right…  2017.  My bad.  In any case, this issue has a slightly more coherent story that a couple of the other Image number ones (especially Spawn, which will someday be studied by scholars as the most puzzling artistic achievement of our time), and Lee’s art makes up for a number of story sins.  It’s by no means a perfect comic, and a lot of the concepts aren’t particularly well-integrated, but WildC.A.Ts: Covert Action Teams #1 gives us the concepts that would later become Wildstorm’s framework and the basis of books like Stormwatch, The Authority and, yes, The Wild Storm, earning a better-than-I-remembered 3 out of 5 stars overall.  It’s a book that could have used a more seasoned writer and perhaps another pass by an editor, but all in all, there is much potential to be had in these pages…

Doesn't do a lot to let you know what the hell is going on, but it looks pretty good and has enthusiasm on its side...