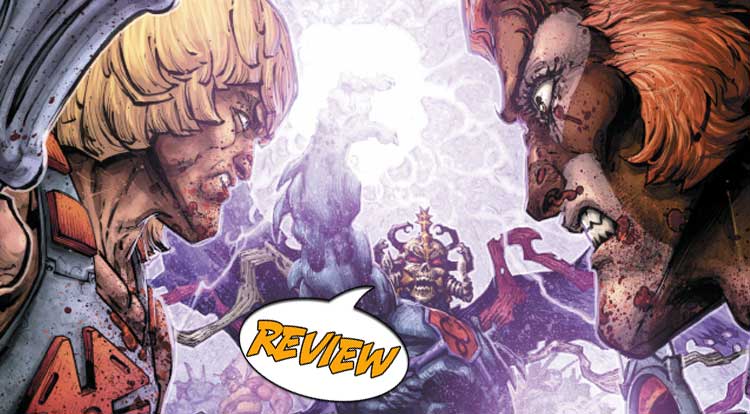 The Sword of Omens and the Power Of Grayskull combine to defeat the ultimate foe…  Your Major Spoilers review of He-Man/Thundercats #6 awaits! Previously in He-Man/Thundercats: “The epic series comes to the only conclusion possible: all-out war against Mumm-Ra and Skeletor! He-Man and Lion-O confront the diabolical duo in the heart of the magical, mystical Castle Grayskull, but the battle royal quickly expands across the multiverse itself!?”

As we open, our heroes are at their lowest point, with Lion-O and He-Man returning to Eternia to find their friends and allies have all fallen at the hands of their greatest foes.  Making their way into Castle Greyskull, our cat and bodybuilder duo discover that their undead foes have found the secret magics at the heart of Greyskull itself, melding their skeleton and mummy forms into one, terrible body… MUMM-ATOR!

Either way, they’re big, they’re bad, they’re dead and they’re pissed, and the power they now wield allows them to pierce alternate universes in pursuit of ultimate power.  Lion-O barely manages to grab the power orb and escape, taking himself and He-Man on a tour of multiple realities (including one where He-Man is Clark Kent, hiding his true self, and a world where their realities have merged to make MasterCats of ThunderVerse a reality.)  Along the way, Lion-O realizes that he can traverse space and keep his home planet from being destroyed, perhaps even saving his deceased father from the void…

I have to say, I don’t have a great deal of attachment to either of these properties, but I found myself engrossed in this story, enjoying all the permutations and clever bits of business David and Goldfine provided.  The combined world is a real stand-out, but everyone has great dialogue (“Note to self,” says Lion-O after witnessing He-Man communing with The Sorceress, “talking to an invisible person makes you look crazy”) and the lampshading of the parallels between their world makes for fun story.  Even better is what happens after the heroes triumph, with Man-At-Arms and Panthro trading weapon-smithing secrets, the King learning of He-Man’s secret identity once and for all, and even an ambiguous ending that could be an opening for more He-Cat stories down the pike.  The art is likewise lovely, with even the most ridiculous physiques (*coughHe-Mancough*) working in context, the dimension-hopping looking incredible and cosmic, and several two-page spreads that are truly epic in scope and content.

THE BOTTOM LINE: PRETTY EPIC, EVEN WHILE FAMILIAR

In short, this book delivers even for a non-fan, and is just plain fun to read, even giving me goosebumps a time or two during the climactic battle.  (All the Master Of The Universe and Thundercats swarming into the battle under the leadership of Man-At-Arms is a really amazing moment, and the art makes it even more so.)  He-Man/Thundercats #6 is a winner, across the board, and now I’m thinking I may need to track down the inevitable collection to enjoy the whole story, earning a very impressive 4 out of 5 stars overall.  If every adaptation of 880s cartoons were this much fun, the world would be a much better place for people in their forties, is all I’m saying…

Fans of either cartoon are in for a well-drawn, cleverly-written treat...