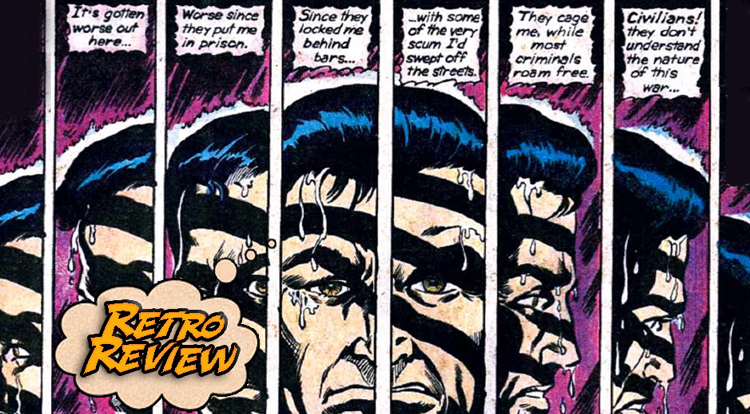 It can be tough to be a fan of The Punisher.  Every time you mention his best moments, some spoilsport trots out the time that he shot a jaywalker to make him look stupid.  But… did that ever really happen?  Your Major Spoilers (Retro) Review of Spectacular Spider-Man #83 awaits! Previously in Spectacular Spider-Man: In contrast to the wild antics of Amazing Spider-Man, where Peter Parker deals with superhero madness, Spectacular Spider-Man was consciously a more street-level book in 1983.  The legendary gang war between the forces of The Owl and Doctor Octopus was a turning point for Spidey, and the debut of Cloak & Dagger brought the Reagan era War On Drugs to the forefront in a particularly bizarre way.  But when you talk about street-level vigilantes, you can’t leave out Frank Castle, the Spider-Man villain known as The Punisher… I apologize if you are offended that I still think if Frank as a Spider-Man villain, but he’ll always be the guy who kept getting fooled to me: The Jackal, The Hitman, nearly everyone he worked with back in the day pulled the wool over The Punisher’s eyes and manipulated him into shooting the wrong thing and/or person.  Of course, in this particular instance, Frank is a bit more wild-eyed than usual, opening up his crusade on crime to wider vistas.

…or the now capital crime of littering. Whatever has possessed him (which we’ll get to later, in case you’re super-worried), Punisher’s newfound rededication leads him to treat every crime as equally heinous and subject to the same penalty: A hail of bullets! The spread of crime must be stopped, Frank monologues to himself, even if it means confronting those who enforce the laws of the land.  And, much as with the litterer, the reckless driver and the angry husband, there’s only one way to open a dialogue with someone who wants to discuss your use of high-caliber ammunition to address crosstown traffic… …swift and blinding violence!  It’s an unhinged Punisher, one like readers had never seen circa 1983, and his shooting rampage is clearly treated as antisocial and bad.  Less than two years later, Frank Castle would be starring in his own limited series, where the creative team of Mike Zeck and Steven Grant would turn him from skull-chested wackaloon to Charles Bronson-style counterculture force for good.  Here, though, he’s still treated as a villainous problem, even when he turns his gun sights on a target that might be worthy of a good shootin’-up… Of course, Wilson Fisk is a man with many enemies, and elsewhere in the city, Spider-Man crosses paths with another couple of vigilantes with murderous intentions on the Kingpin, Cloak and Dagger.  Having been mutated into their new forms by drugs, the duo has targeted the pushers of New York City, all of whom have ties back to the portly bullet-headed crime boss.  Spidey tries to talk them out of wholesale murder, and rushes to Fisk’s skyscraper in the hopes of protecting a man that he also doesn’t care much for.  (That’s how you know that he’s the hero of this book, BTW…) Kingpin, being a manipulative jerk, plays off Spider-Man’s heroism, maneuvering the Web-head into defending him from Cloak and Dagger’s two-pronged assault of light and darkness.  While Spidey talks them out of homicide, The Kingpin makes like a tree and gets outta there, thanks to a hidden escape passage.  That’s when Frank makes his own killin’ intentions clear…

Here’s another way you can tell that Frank Castle is the villain here: He is considered in-story to be wildly overmatched by Fisk, whose strength and power were established in a number of classic Daredevil tales by Frank Miller a couple of years earlier.  Even with his friends Smith, Wesson and Winchester, Frank clearly isn’t up to the task in Mantlo’s narrative… Ah,yes.  The old Bulletproof Sofa trick!  Classic…  Frank and Wilson prepare to hash out their differences while, in the anteroom, Peter, Tandy and Tyrone realize that they’re on the same side, albeit with different takes on the whole “Thou shalt not murdalize big fat capo de tutti capos” part of the job.  Their battle ended, they open Fisk’s secret panel to see the aftermath of the battle between ascot and AK… And with that cliffhanger, The Punisher’s fate is sealed.  In the next issue, he is jailed for his crimes, but escapes the most severe penalties by dint of his clear insanity.  Breaking down in the courtroom, Frank collapses in tears, lamenting that society has fallen to the point where endless petty crimes and insults are considered normal.  By the time of his solo series, it’s revealed that The Punisher was dosed with hallucinogenic drugs during the events, and was not in his right mind, a retcon that is well-delivered in the space of a few panels, putting Frank on the path to his eventual 90s ubiquity as on of the faces of grim and gritty, but…  That’s another Retro Review.  Spectacular Spider-Man #82 isn’t the prettiest book in the world (the pencils of Al Milgrom aren’t even entirely saved by Jim Mooney’s wonderfully expressive inks) but Mantlo delivers with the character work and plotting, even as he casually no-sells the threat of The Punisher as unworthy, leaving the book with a mixed-bag 2 out of 5 stars overall.  If nothing else, it’s interesting to see how quickly the view of The Punisher turned once it became clear that readers were responding to his shooty=-shooty antics…

The art has a crudeness that's not entirely pleasant, but there's a lot of story and character to make up for it. Plus: Litterer shootin'!