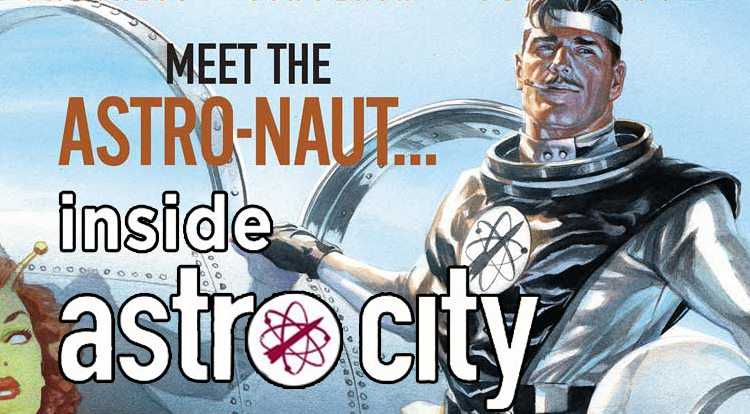 Inside Astro City #41 with Kurt Busiek

Welcome to Inside Astro City, a column focusing on the Vertigo Comics series Astro City from Kurt Busiek, Brent Anderson, and Alex Ross!  Each month, we’ll take a look at the current issue of the series, and ask series writer Kurt Busiek questions about the book.  This time around, it’s the one-hundredth issue spectacular featuring the man for whom the city is named, it’s Inside Astro City #41! Astro City #40: “It’s our 100th issue celebration!  This 40-page extravaganza introduces Astro City’s most revered hero-the Astro-Naut! Learn his secrets!  See him in action!  And in the heat of World War II, see the stunning sacrifice that inspired a grateful populace to rename a city after its greatest hero.  Also featuring the All-American, the Lamplighter, Zootsuit and the debut of the Gentleman, as our tour through Astro City’s history continues!  This amazing anniversary issue features two covers: one by regular cover artist Alex Ross, and the other by the great Alex Ross!” MAJOR SPOILERS: Congratulations on one-hundred issues of ASTRO CITY!  After hinting and referencing since almost the beginning, we finally get to see the story of the man for whom Astro City was named.  Was it a conscious decision to hold Roy Virgil’s story for a big anniversary issue?

KURT BUSIEK: It was. At times, we thought we might do it as the last issue of the series, if and when that happened, or as a separate graphic novel, when we had delusions of my having the spare time to do that sort of thing.  But when we realized that we really should do something special for the hundredth issue, and we’d be in the middle of a crackpot tour of the 20th century, it seemed like the perfect choice.

It does seem like we hit “anniversary issue” season, all at once — we had #26, which was the 20th anniversary issue, then #41 was the hundredth issue, and now I’m working up plans for another special story for #50…

I like to think all the stories are special, but I think these three all work as anniversary issues, too.  I hope the readers feel the same. MS: What influences led to The Astro-Naut’s final depiction?  There’s some Howard Hughes in there, I think…

KB: That might be a question more for Alex than for me.  When I told him we’d be getting to this story soon, he said “Oh, I’d better dig up my sketches of him and finalize the design.”  Turns out he’d started working up designs for the Astro-Naut 20 years ago, and I’d never seen them at all!

Most of my contributions were in coming up with appropriate looks for his various ships.  Alex had a strong idea of what the Astro-Naut should look like right from the start, and mostly I was a sounding board, choosing between bits and pieces of great-looking variations Alex kept showing me.

Howard Hughes was definitely an influence, as were innumerable pulp aviators and SF pilots.  We wanted a look that felt pre-superhero but also fit the tone of early superhero designs, and I think Alex did a gorgeous job.  And yet, despite all that pulp-style elegance, my favorite part may be the fact that he smokes cigarettes even when he’s got a space helmet on. MS: So many of this series’ finest stories end on tragic or melancholy notes for the characters involved (albeit always with that trademark Astro City strand of hope.)  Would you say that this has any relationship to the seeming lack of endings or closure that we see in the decades-old shared universe formats of corporate comic companies??

KB: I think I may simply like bittersweet endings. Or perhaps, in a series like ASTRO CITY, we’re making a point about how life keeps throwing things at you, and in the end you don’t fully win or lose, you just find a way to keep going, with small triumphs and calamities being a part of the experience of being human, more than “Happily Ever After.”  But I don’t think it’s any sort of comment on the corporate comics universes — it certainly isn’t a conscious one, that’s for sure.

Our stories reach endings because we’re going to switch to another viewpoint, someone else’s story, with the following issues.  So I want it to feel like a conclusion, like a complete story, but the universe itself continues on, so it’s the end of a story but not the end of the world.

At least not so far. MS: Along with the sudden appearance of an old friend (the image on page 22 literally gave me nightmares, so tell Brent good work), we meet Zootsuit, another aspect of the character last seen as Jazzbaby, but was there another aspect seen  briefly earlier in the issue, as The Trumpeter?

KB: I suppose I should act all mysterious, but no, The Trumpeter is just an early Golden-Age-type minor hero.  I can’t find a copy right now, but I’m hoping we were smart enough to color him something outside the red-orange-yellow spectrum that this specific line of heroes share… MS: The focus on Astro City’s damage and losses in this issue seems to be a direct counterpoint to what we saw in Volume 2 #1 during Ben Pullam’s arrival in town, where the residents of the city are used to, perhaps even blase about the superhero battles in their midst.  Was this an intentional anniversary reference or too many recent back issue dives for me?

KB: It might have been an unconscious reference, but it wasn’t anything I was thinking of as I wrote it.  I just knew that the Astro-Naut (a) sacrificed himself saving the city from a devastating alien attack, and (b) it destroyed a lot of the city center, which is why that part of the city today is full of post-1950 skyscrapers, while other parts of the city still have a lot of older buildings, like Grandenetti Cathedral.

I was more thinking about the devastation of the war hitting the US homeland at a time they thought it was all over, really, more than any reference to vol. 2 #1 KB: It’s coming fast, I’ll tell you that — due to the vicissitudes of scheduling and lateness, #42 will be out a mere two weeks after #41.  It’s a guest-artist issue, this time drawn by the ineffable Matthew Clark, who did a beautiful job (and Pete Pantazis was born to color Matt’s work; wait’ll you see it).  It involves pirates, desert islands, old enmities, fried fish, a glimpse of what Mermaid looks like today, a resourceful criminal genius and unwelcome noise.

As to whether this one’s a happy ending or not, I’ll have to leave it to the readers to decide…! Astro City #42: “They call him Mister Manta, the Scourge of the Seven Seas.  At least, they called him that a long time ago.  Nobody’s called him anything for years, but that’s about to change.  What happens when a long-forgotten villain makes his dramatic return?  Can he find his place in the world, or has it moved on without him?  Featuring guest artist Matthew Clark (WONDER WOMAN, DOOM PATROL).”