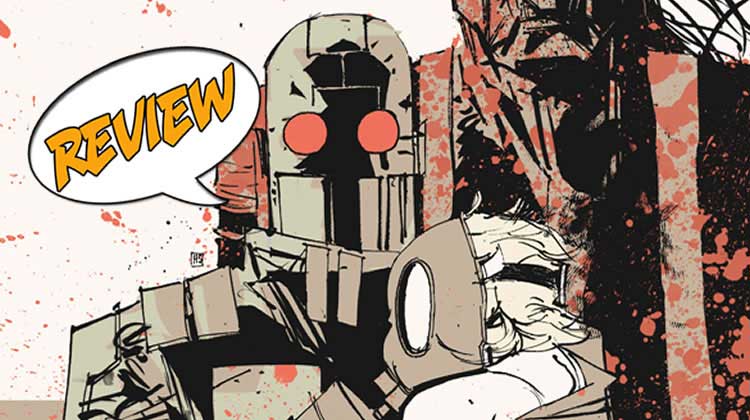 I wish I could find the very first story every written about a dystopian future. Whoever composed it deserves a lot of credit because it remains a popular setting for comics, sci-fi and many other forms of entertainment, even to this day.

That brings us to The Few, a new limited maxi-series from Image Comics, penned by writer and playwright Sean Lewis and with art from Hayden Sherman.  It’s a follow-up to Lewis’ cult-favorite Saints. This week, the second issue arrived, and it’s really fascinating. It’s described as a story that combines “Mad Max action with a Station Eleven sensibility.”

Previously in THE FEW: As Hale and the Boys run further from Herrod they find themselves taken in by the father of the militia men. Hale’s past comes more and more into light as we discover how these boys are as good at guerilla warfare as they are.

HERROD BE HIS NAME

The important part of this kind of story is that the main baddie be particularly menacing, and Herrod fills that bill quite effectively. Then, too, there’s a young baby who is in trouble, and that pulls on the heartstrings quite effectively.

However, at this point, the story focuses on young Hale, who is a palace guard and has led a comparatively easy life (if anyone in a military organization lives an “easy” life). He comes across said baby, and works to rescue the child, but things don’t work out quite so neatly in this future. Instead, they are taken to a conclave of people who seem to have banded together to survive. Hale and the child are given their freedom, as they call it, by becoming a part of this group.

Is that a good or a bad thing? We’ll find out in the issues ahead.

The pacing of the story is slow at times, then faster when action is needed. There isn’t as much dialogue as in a regular comic, and that fits the tone of the series so far. In the first issue, the initial several pages have very few words on them. There are more as we move along in this second book.

In a series like this, we have to become familiar with the characters very quickly, and that is accomplished through their actions. Hale’s inner dialogue has words being used very judiciously, so each one counts. His attachment to the child is also a sign of who he is, so it’s a great way to show us who he is.

There are other people that revolve around Hale and the baby, and most of them – including Hale’s brother – will take more time to get to understand, seems like.

Still, it’s a very engrossing story, and two issues have me very seriously looking forward to more. The sooner, the better, I feel.

THE ART SHINES IN THIS SERIES

I was particularly impressed with the art, which uses something of a pencil-sketch feel with several colors from a well-defined palate. Even the blood isn’t a bright red, but more like an orange color. The background looks like a very pale yellow, and other greens and browns are used, giving it a “dirty,” darker sensibility. It really fit the story well! And there are no white areas on the page – the entire page is laid on that pale yellow color, so the entire world seems dull or feels like much of the emotion has been snuffed out of it.

I always prefer more detail, but this artist’s work is usually compelling and, at the very least, interesting. The facial expressions on the characters are often dour and murky, but I think that has to do with the story. If a person broke out into a genuine smile, it would seem out of place.

Again, I would have liked more detail to the action sequences, and some of them take some time to look through and sort out exactly what’s happening. But this is a thoughtful comic, so most of the time, I was down with it, as some like to say!

I’m a science-fiction guy, and I’m very much used to dysfunctional worlds and futures. I easily got into this series, and I’m looking forward to what’s coming in the months ahead.

The challenge for a comic like this will be to make us care about what’s going on in a world that has a very limited range of emotions and characters. As I said, I already like Hale and the baby, and dislike Herrod. The others? Well, we’ll see what happens in the issues coming our way soon.