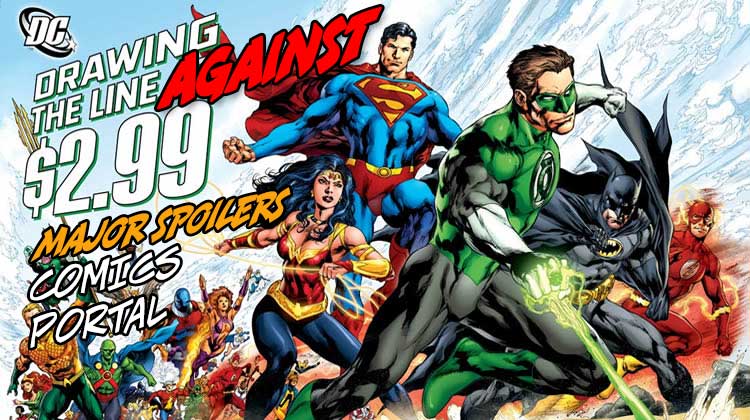 COMICS PORTAL: Drawing the Line Against $2.99

A news item that caught my attention this past week focused on the recent ComicsPRO meeting, with store owners and representatives from comics companies in attendance. During several conversations with retailers, at least according to some Internet discussions, Marvel Senior Vice President: Print, Sales & Marketing David Gabriel remarked that the practice of selling comics for $2.99 and allowing returns to happen for up to three months was taking “money off the table.”

Since there’s really only one company doing that, it’s clear he was referring to DC Comics.

I may not be able to completely convey my feelings on this, but a former English teacher of mine would call something like this “baloney largely sliced.” Let me see if I can explain.

THE LOGIC BEHIND THIS POINT If you sell a book for $5.99 (and of course, stores buy them for less than that, which is how they make money), you obviously bring in more than $2.99 – a three dollar increase in business for that book alone! Imagine selling more $5.99’s! You’d bring in a lot more income, right?

DC’s sales numbers may increase, but the concern is that it’s not enough to cover what some refer to as “reduced income” – making less than a more expensive book might bring in. Also, you have to add in the cost of printing, distributing and selling more copies a month, a referral to books coming out twice a month instead of only once.

An argument has also been made against DC’s policy of allowing three months for comics to be returned. The thought is, stores can now order high and sell less than anticipated, returning their unsold comics. This whole process is believed to delay repayments to shop owners who return stripped covers, which hinders the flow of money. This can cause stores to have to reduce what they’ll order as time progresses, which could hurt everyone involved.

It was also mentioned that Marvel’s overprint service was available to help stores be sure they have enough comics in stock to help them make it through “this difficult time.”

WHY I DON’T BUY THIS ARGUMENT I’ve been reading comments on both “sides” of the issue, and there have even been those who call people who are happy with the $2.99 price tag as “pro-DC.” In other words, the perception is that support DC to the exclusion of others, so you’re point of view is less than trustworthy. (Funny how there don’t seem to be any “pro-Marvel” folks around.) At least, that’s how the tone of the remarks around that phrase made me feel.

The attitude that I find to be a problem is that, if we only sold more higher-priced books, why, the stores would make more money! Of course, right?

There’s one option that people keep forgetting when they want more expensive comics – that is, you don’t have to buy them at all! There’s no “requirement” that fans MUST buy books that cost more. They can just opt out, stop buying them in the numbers they are buying them currently, or stop buying them at all. They’re forgetting the customer, in my opinion.

I frequent several comics shops, and each one I go to has said that the Rebirth event has been quite a success for them. They’re getting more customers through the door, and they’re buying comics because, in the words of several of them, “they’re getting more books to read for their money.”

Let’s say you buy two books costing $3.99. That’s about $8 out of your pocket. What if you don’t care for one or even both of them? You’ve thrown money away, as several fans I know like to say.

Believe it or not, it also happens that people have a set amount to spend. How about we say $10 a week? Well, if you’re going to buy $3.99 comics, you can only buy two of them. If you buy $2.99 books, you can get three. And to many of us who have to live on budgets, that’s an extra book every week of the year! You’ve been able to read 52 more books a year, and that’s better for a local store as well. That’s more dollars overall, from my point of view.

Also, many movies and other forms of entertainment are about the same price. What’s to stop someone from spending their dollars elsewhere? Nothing if we don’t use everything in the industry’s arsenal to keep them coming back for more comics!

OF COURSE MARVEL WANTS TO SELL AT A HIGHER PRICE

Look, I understand that Marvel wants comics to sell at a higher price. They feel they’ll make more money because people likely want their product more than that of other companies. And I don’t begrudge them that. They’re the top company, and they’ll do whatever it takes to stay there.

They realize that DC’s lower price attracts a certain number of fans. Some may prefer Marvel, but DC’s price is too good to pass up, so they buy DC instead. Marvel wants a level playing field with the notion that if people have to choose out of books all costing $3.99 or more, they’re more likely to buy from the House of Ideas than DC. I get that. We could change the catchline from “Keeping Comics More Affordable for You” to “Keeping Comics More Profitable for Stores.”

What concerns me is, I don’t know how long DC can continue to sell their books at $2.99. I mean, ink and paper costs continue to rise, and eventually they’ll have to buckle more to production costs than Marvel’s position.

I would make a suggestion to DC, though. If you must raise the price, what about $3.25 of $3.50 an issue instead of going all the way up to $3.99? Or would the difference not be significant enough to attract the customers who like $2.99? And Marvel may already be ready to jump up to $4.99 an issue, which would really make DC’s lower price a better option.

What do you think? Does the $2.99 price make DC a better value? Would you buy more Marvel comics if all the prices were the same? Or am I all wet when it comes to this topic? Please be sure to share your opinions in the space below!