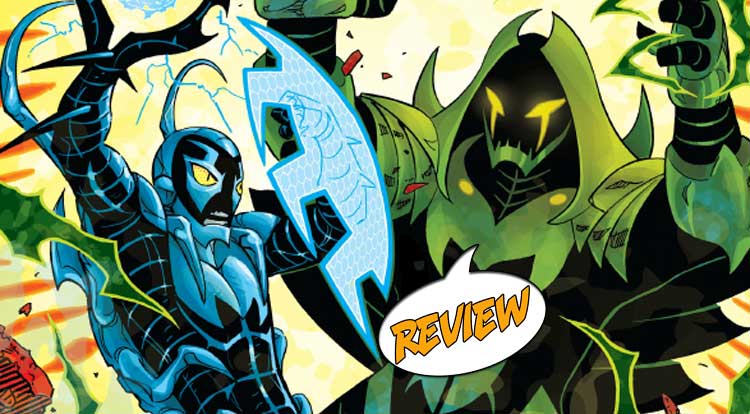 Previously in Blue Beetle: ““The mystical being known as Mordecai Cull has come to El Paso to help pave the way for the rise of an even more powerful and malevolent entity.  What he wasn’t planning on was facing Blue Beetle and the power of the scarab!  Now Cull is out to wrest the device from Jaime by any means necessary.  But the Beetle doesn’t stand alone—Dr. Fate’s not about to stay on the sidelines in this epic battle!”

As the issue opens, Jaime angrily confronts Ted Kord about Mordecai targeting his family, forcing Ted to finally admit the truth: The scarab may have been responsible for the death of Dan Garrett, and he wants to remove it from Jaime, but…  that may not be possible.  Consumed by anger and frustration, Blue Beetle flies off into the night, watched by Doctor Fate, only to crash head-first into Mordecai.  Jaime’s…  essence?  Soul?  Whatever it is, the spiritual stuff that makes up Mr. Reyes is removed, leaving the battle armor to fight on and lay the smackdown on Mordecai, leading Doctor Fate to step in and combat the rampaging Beetle armor…

Even though it’s a little bit weird to have a third restart on Jaime’s Blue Beetle history (he’s been sixteen for over a decade now), I’m impressed with this issue.  Giffen’s collaboration with Kolins has added a new dimension to the Blue Beetle’s story and the addition of Ted Kord makes things more interesting.  Kolins’ art is impressive, especially in rendering the dings, dents and dust of superhero fighty-fighty, and his take on Blue Beetle (with the insectoid eye-slits on the goggles) adds a new aspect to our teen hero.  Knowing that Jaime’s friends are still around (Paco and Brenda appear in these pages briefly, and The Posse is referenced more than once) is also a positive for me…

In short, the adventures of Beetle and Beetle (featuring flashbacks to Beetle) are still compelling, and the interplay of impetuous Jaime with more mature Ted makes for good story.  Blue Beetle #6 had me with the revelation that Kord still has his bug-goggles, but kept me hooked with interesting story and very good art, earning a better-than-average 3.5 out of 5 stars overall.  Rebirth has done the metaphorically impossible here, balancing two different versions of a character into one story that manages to be respectful of both and a good story on top of it…