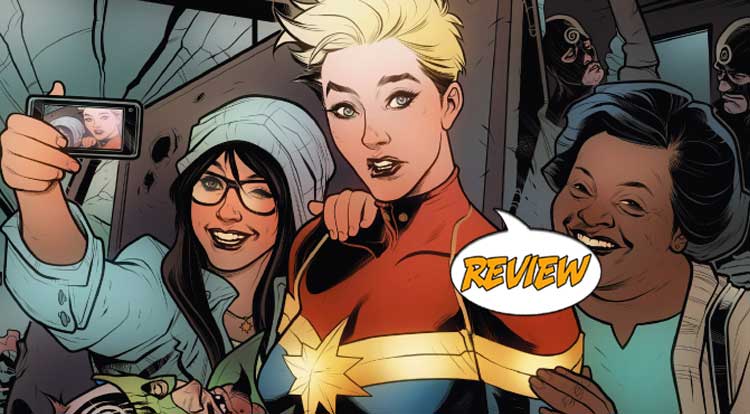 There’s an alien bounty hunter a’comin’, and Captain Marvel’s super-powers are on the fritz.  This… could be bad?  Your Major Spoilers review of The Mighty Captain Marvel #2 awaits! Previously in Mighty Captain Marvel: “Recently, a refugee camp for aliens displaced to Earth by a fleet of Chitauri warships was attacked.  During her battle with the mysterious assailant, Carol discovered that someone, somewhere, is hunting down Kree children.  Captain Marvel has taken one such Kree child under her wing and has sworn to take down the bounty hunter, but her newest Alpha Flight responsibility – a TV show (loosely) based on her life – keep distracting her…”

As the story opens, Captain Marvel is making repairs to the Alpha Flight Space Station, which she refers to as “the one place that still feels like home,” referring to the terrible events of Civil War II which, cards on the table, made me question whether I wanted to buy this issue at all.  Before she, Sasquatch and Puck finish their patch job, though, her powers kick in and she fires a photon burst that further damages the station.  Heading back inside, her powers keep fluctuating, and the production crew has arrived to film their fictionalized version of her life.  Bean, a young Kree child that she has agreed to take care of, suddenly panics, using her limited English to let Carol know that the bounty hunter searching for Kree children has arrived and his shape-shifted into someone on the station.  And then, things get fighty…

INCONSISTENCIES IN THE ART

I generally like Ramon Rosanas art in this issue, but occasionally a panel or two will get through with really terrifying proportions (Sasquatch gets the worst of it, but a wide shot of the crew and their TV doppelgängers features a few Slenderman bodies as well) and there’s a couple of really terrifying facial expressions during stressful situations.  Backgrounds are beautiful, though, especially as Carol ends up in the Arctic wastes near the end of the issue.  (Also: Arctic wastes plus bounty hunter who shape-shifts should lead to ‘The Thing’ references next time around.)  The story is likewise packed with things that are interesting, cool or should work, but for some reason don’t quite gel.  Some of it can be chalked up to the editorial issues revolving around CWII, but I think that this creative team may be trying to do too much in too little space, leading to none of the cool stuff getting any breathing room…

THE BOTTOM LINE: KIND OF MUDDLED

All in all, I wasn’t sure what to expect from this book, so having it end up being a slightly above-average experience was a pleasant surprise.  Unfortunately, Carol’s run as Captain Marvel has been full of incredible stores and really strong character moments, making a slightly off take feel amplified.  Even so, The Mighty Captain Marvel #2 has potential, earning 3 out of 5 stars overall, and at least leaving me willing to see what all these creators have up their sleeves.  There’s a chance that once the arc is collected, the weaknesses here won’t be as prominent…

Kind of all over the place, and the "voice" I associate with Captain Marvel over the last few years is missing...