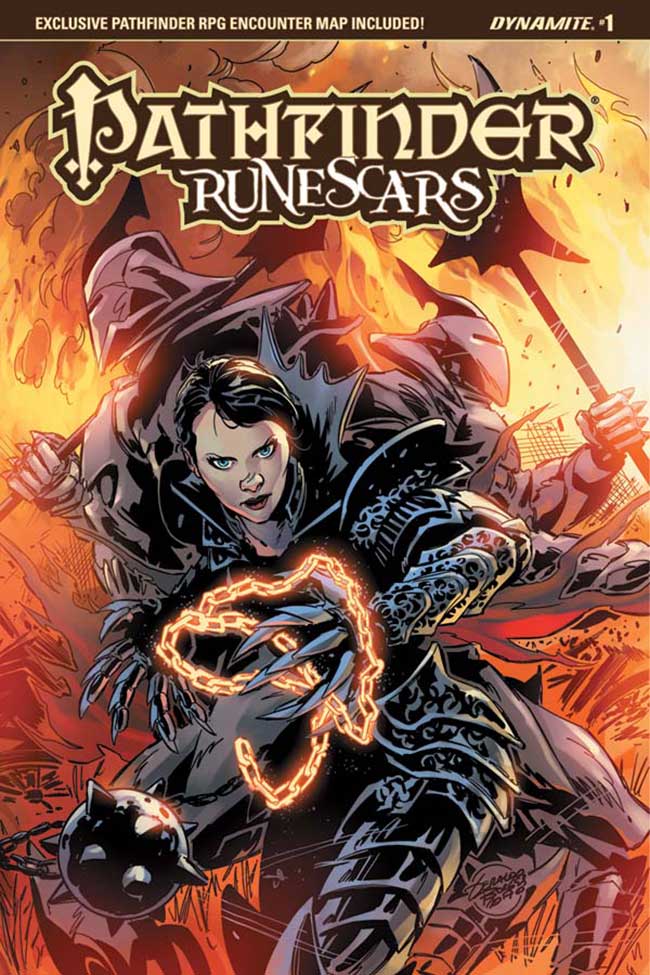 An exciting new Pathfinder adventure begins! The Pathfinder heroes receive a desperate plea to unmask a killer stalking the chaos-gripped city of Korvosa. A new queen has ascended the city’s Crimson Throne, and now deadly armored Hellknights and Gray Maidens clash in the streets. With the help of a cagey adventuring detective, the heroes race down the perilous trail of a brutal murderer – only to realize that the next target might be one of their own! Dare the magic and monsters of gothic Korvosa in the first sword-swinging issue, complete with pull-out poster map and official Pathfinder RPG bonus encounter.

“I’m extremely excited to be getting two-thirds of the Pathfinder: Hollow Mountain writing team back together for Pathfinder: Runescars!,” says James L. Sutter, Paizo Senior Editor. “Wes and I have been writing together for a decade now, constantly pushing each other to create better plot twists and funnier jokes, and I think you can see that synergy at work from the very first issue of this new series. We’re going to be revealing some secrets in this one that fans have been asking about since the very beginning of the game, so I can’t wait to see people’s reactions!”

“Pathfinder: Hollow Mountain gave us a chance to explore the Pathfinder world from inside the dungeon. With Pathfinder: Runescars, Sutter and I are taking that same approach to the streets,” says F. Wesley Schneider, Paizo Editor-in-Chief. “We’re totally jazzed to explore Korvosa, not just because it’s one of Pathfinder’s most adventure-packed cities, but because we’ve been detailing the place with Paizo’s incredible creative team for more than ten years! While we’re visiting, we’re absolutely planning to show off as many fan-favorite creatures and characters as we can – like notorious Gray Maidens and merciless Hellknights! We’re also revealing a few schemes we’ve had in the works for quite a while now. No sword-and-sorcery reader – and certainly no Pathfinder fan – should miss it!”

“Our publishing partnership with Erik Mona and the team at Paizo has been as rewarding for fantasy comics fans as well as fans of the game itself,” says Dynamite CEO and publisher, Nick Barrucci. “What makes this line of comics so unique is that each series not only ties into the game’s story, but makes the stories themselves playable to enhance the gaming experience. With the game’s co-creators handling the writing duties on Runescars, you can bet this is going to be one of the best Pathfinder adventures yet!”

“Dynamite’s Pathfinder comics present a great opportunity to learn more about the Pathfinder world’s iconic adventuring heroes, as well as more depth and detail about the world of Golarion itself,” says Paizo Publisher and Chief Creative Officer, Erik Mona. “This time, world co-creators F. Wesley Schneider and James L. Sutter weave a tale of mystery and high magic that finally unlocks the secret of the sorcerer Seoni’s magic tattoos! I’m excited to find out the answer to the riddle myself!”

Pathfinder: Runescars #1 will be solicited in Diamond Comic Distributors’ March 2017 Previews catalog, the premier source of merchandise for the comic book specialty market, and slated for release in May. Comic book fans are encouraged to reserve copies with their local comic book retailers. Pathfinder: Runescars will also be available for individual customer purchase through digital platforms courtesy of Comixology, Dynamite Digital, iVerse, and Dark Horse Digital.