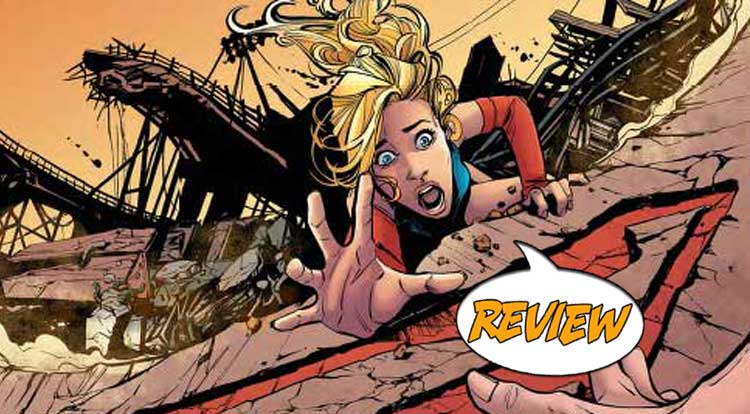 Kara’s just your normal girl who worries about grades, boys and her next track meet.  Of course, that’s all about to change…  Your Major Spoilers review of Supergirl: Being Super #2 awaits! Previously in Supergirl: Being Super: Last issue, perfectly normal Midvale high school kid Kara Danvers, who totally isn’t an alien being with mighty powers at all, went about her life without incident.  Then, her track meet was devastated by a huge earthquake.  Can she start being super in time to save her friends and her hometown?

LIVES HANGING IN THE BALANCE

Seconds after the last page of last issue, Kara and her friend Dolly search for Jen, the third member of their group, currently dangling into a crevasse and about to be crushed.  As they rush, Kara uses her super-strength for a moment to catch a falling lamppost (something that Dolly clearly witnesses) before leaping into the gap to grab Jen and save her…

Or at least, that was the plan, as Kara’s fluctuating abilities chooses that precise moment to flake out on her, leaving them both in mortal danger.  Kara is barely saved by search and rescue teams, but her loss of strength means that Jen falls into the sundered earth to her doom.  Heartbroken at the loss of her friend, Kara spends the middle portion of the issue mourning, trying to come to grips with not only mortality but the fact that her power failed her when she needed it the very most.  After going on a run to clear her mind, Kara finds herself dreaming of her pod, and the strange red cloth with the alien symbol on it.  Racing to the barn, she drags it out, only to be overcome by another bout of weakness, while a mysterious someone monitors her life functions.

First off, Mariko Tamaki is a really good writer.  This issue is tense, then moving, then emotionally devastating, followed by paranoia and worry for our main character, all in the space of less than fifty pages.  Kara’s emotional response to the loss of a friend feels very genuine, and the way her family and Dolly try to address it is both awkward and touching.  In many ways, this book reminds me of ‘Smallville’: It’s a coming-of-age Superman story in many ways, but told with the compelling figure of Supergirl at its center and a slowly growing mystery of who is watching and recording her life.  Kara doesn’t yet know she’s an alien, instead spending some time this issue to talk about how she though as a little girl that she was magic, which may be one of the cutest and most realistic “I have super-powers!” responses I’ve read  in recent memory.  The art is also pretty fabulous, giving us teenage girls who feel like teenage girls, with a chubby Mrs. Danvers, a taciturn Midwestern lunk Papa Danvers and some incredible action during the earthquakes sequences.  The final page of Kara collapsed on her “blanket” is a wonderful cliffhanger moment that is itself worth the price of admission…

In short, I wish that this were the regular monthly Supergirl comic, or even better, one of several regular monthly books ala Batman or Spider-Man.  Kara feels like a genuine person in these pages and the art is truly wonderful, leaving Supergirl: Being Super #2 with a darn near perfect 4.5 out of 5 stars overall.  I’m still hoping beyond hope that the strange voices Kara keeps hearing mean that Jen isn’t actually dead at all, but either way, I’m going to be back every issue as long as this book keeps coming out…

Gut-wrenching emotions and strange happenings, with phenomenal art, make me sad this is a miniseries...