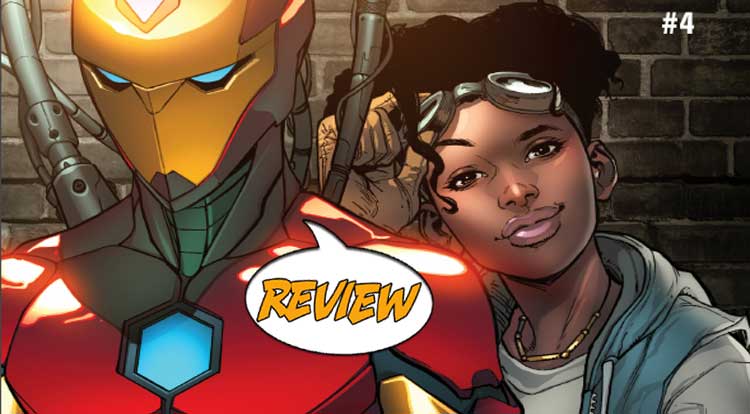 Rescue and Riri’s excellent ninja adventure continues.  Only it’s not excellent, it’s actually kind of violent and terrible and might end up being fatal…  Your Major Spoilers review of Invincible Iron Man #4 awaits! Previously in Invincible Iron Man: After the loss of Tony Stark in Civil War II, teenage genius Riri Williams has taken up the role of Iron Man (name-change pending.)  Last issue, she encountered Pepper Potts, Rescue, before both of them had their armors hijacked by Tomoe, leader of a group of ninjas.  Without their primary defensive systems, can Riri and Pepper take down ninjas?

IT WON’T BE EASY

As we open, Riri is understandably excited for her first battle against A Pack Of Ninjas, but Pepper isn’t nearly as thrilled.  With Tomoe having taken control of both their armors, our heroes have only their wits and courage to go on, a moment underlined when Pepper orders her younger counterpart to run.  Keeping the ninjas busy as best she can, Pepper buys time for Riri (whose name I just discovered in this issue is Rachel, which frankly I prefer) to access her Tony Stark A.I., which gives her the whole story on Tomoe and the virus that Stark created to take the Techno-Golem down.  Unfortunately, the words “in theory” also come into play, and the A.I. is forced to activate an old-school Iron Man armor to engage the villain, only to find it quickly absorbed as well.  As the issue ends, Pepper has fallen, Riri is confronting ninjas with only a fire extinguisher and the virus may or may not actually be active at all.  It’s…  less than ideal.

This issue is a REALLY fast read, all action and tension, taking place in the space of just a few minutes and ending on a really strong cliffhanger note.  The interactions between the two armored heroes (or the formerly armored heroes, thanks to Tomoe) are really well-written, and I really love Pepper Potts as an elder statesman established superhero.  Stefano Caselli’s art is excellent again this issue, especially the shock on the faces of Mary Jane and Tony’s mother/new CEO as an empty suit of armor suddenly gets up and blasts away through the skylight.  I enjoy all the ninja stuff as well, and the combat sequences are really well-done.  My main complaint with this issue is the sudden frenetic pace of it all; we’re four issues into Miss Williams’ adventures and it feels like we’ve been talking and talking for the first three issue with a sudden burst of manic battle here, meaning that none of the single issues actually feel like a complete chapter.  Instead, we get the impression of someone getting interrupted mid-sentence every issue.

THE BOTTOM LINE: A FAST READ

There are some real pacing problems with this issue (and the arc in general), but overall it’s an enjoyable issue of comics, even if I feel like not a lot actually happens here.  Invincible Iron Man #4 features some fun dialogue and a really effective cliffhanger ending, and Caselli’s art is top-notch, earning an above-average 3 out of 5 stars overall.  I’m starting to think that by the time the name change to Ironheart comes around, they’re actually going to relaunch the book with a new number one issue…