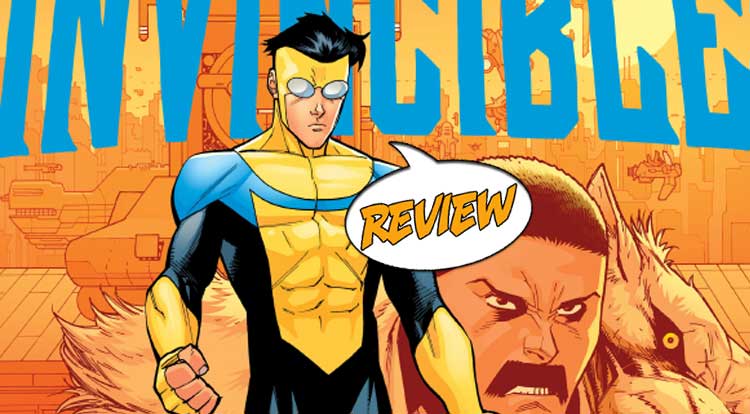 The End Of All Things must come eventually.  For Invincible, that time is now.  (Also for the next eleven months…)  Your Major Spoilers review of Invincible #133 awaits! Previously in Invincible: Returning home after a five-year absence, Mark Grayson had finally come to terms with his family and was starting to get comfortable in his life again when would-be Viltrumite Emperor Thragg attacked.  Thankfully, he didn’t murder Mark’s daughter, Terra, but he did kill Oliver Grayson, Mark’s younger brother.  Mark and his wife Atom Eve were also gravely wounded in the battle, but her matter-rearranging powers put them both back together.  The Graysons are ready to confront Thragg and his stupid mustache once and for all.

But first, there’s the matter of Oliver’s funeral…

We open at a funeral, as Oliver Grayson, the hero once known as Kid Omni-Man, is laid to rest with full state honors.  When Allen the Alien tries to deliver condolences to Invincible, however, things go bad quickly.  Mark responds with rage that Allen asked his brother to go undercover in Thragg’s army, and it gets a little punchy.  Omni-Man moves to intercede, but Atom Eve shuts him down and gets between the two warring supermen, only to smack her husband in the head with her trademark pink energy constructs.  Mark and Eve have it out about not only his response to Oliver’s death but the actions that led to the situation that they’re in, finally dissolving into a tearful hug while Allen slinks away.  The Graysons vow that they will work together to take care of Thragg’s nefarious plan…

…AFTER they take care of some old business by getting married.  On their honeymoon night, Eve hides their wedding bands until after business is taken care of, shocking me by telling Mark that he was right about one thing: “Being a hero is bull$#!+.”  As the issue closes, Allen The Alien returns home with one more shocking secret, one so terrible that he can only share it with his beloved alien-lady-friend Telia: He manipulated Oliver in the hopes of bringing Mark back into the fold, causing the younger Grayson’s death.

This issue feels pretty packed with events, delivering the kind of non-stop drama that the really good issues of Invincible are known for, and it seems pretty clear that deciding to wrap the series up has put Kirkman in a mood to get stuff done.  The Mark/Eve wedding is long overdue, and the emotional blow-up at the funeral feels both natural and somehow necessary to bring the characters together to deal with their grief.  Several characters make their return in these pages, as if to remind us that they’re out there (Nolan “Omni-Man” Grayson for one, and I’m going on record as saying he’s not long for this world, one way or another) for the big 12-issue finale arc, and the return of Ryan Ottley on pencils is likewise welcome.  As much as I appreciate that Cory Walker is the co-creator of the book and all, I prefer Ottley’s smoother line and stronger storytelling chops, especially when drawing the love Mrs. Eve Grayson.  With the plot gaining momentum, I’m hoping that Invincible goes out with the kind of bang the book deserves after such a long and storied run…

THE BOTTOM LINE: OMINOUS, BUT ENGAGING

In short, Invincible #133 is a good one, delivering on the promise of a game-changing arc, reminding us how good Mark and Eve are as a couple and possibly ruining Allen The Alien in the best ways, with strong art and great dialogue, earning 4 out of 5 stars overall.  Maybe it’s the proverbial Graduation Goggles talking, but this issue reminds me of how good ‘Invincible’ can be and how much I”m going to miss it when it’s gone…

Catharsis, emotional turmoil and a shocking reveal make for one of the best issues of this book in recent memory (and it's not like they've been slacking with the last few.)