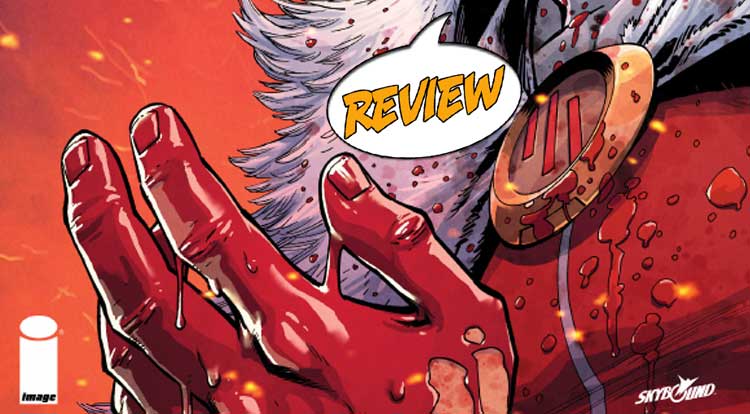 When last we saw Mark and Terra Grayson, he was under attack and she was falling to what is almost certainly inevitable doom.  You…  You don’t think they’d kill a little girl, do you? Previously in Invincible: Thragg has been rebuilding the Viltrumite race by cross-breeding with the Flaxan people, making an army of purple-skinned superhumans, and has now targeted the Grayson family for death…

The level of violence in Invincible has always been dialed up to eleven, ever since the first battle between Invincible and his father Omni-Man left our hero lying in a literal ocean of his own spilled blood, so I have been worried for the last month or so that we are going to see a young girl beaten to death in these pages.  Of course, the creative team knows that, and so this issue embarks on a series of teases, with Terra suddenly discovering her own flying abilities as she falls, followed by Oliver Grayson turning on Thragg to save his niece’s life.  The rest of the issue is a desperate ongoing fight scene, with Thragg’s two children, Invincible, Atom Eve, Thragg and Oliver beating the living heck out of one another.  There are three shocking moments that I’m not willing to spoiler, but suffice to say that this issue is a pretty satisfying one, even with the blood, guts and intentional feints towards child murder.

This issue looks phenomenal from cover to cover, with Eve’s power constructs looking particularly amazing, and the moment where Mark reveals that he’s less hero than protective father (another bloody one) also standing out.  If there is a complaint about this issue, it’s how quickly everything is wrapped up so that we can embark on the final 12-issue arc of the book starting next time.  After what happens this issue, I’m now of the belief that Thragg has to die, and frankly I hope it’s a painful Kirkman bloodbath, something I haven’t wanted for anyone this much since I quit reading ‘The Walking Dead’ because of Negan.  Given the loss of cast members this time, the conflict between the Graysons and the Thraggs has become personal in ways that really up the ante for our cast…

THE BOTTOM LINE: A BIT ABRUPT

I don’t want to make it seem like this isn’t a satisfying comic book issue, because there are a lot of excellent moments to be had.  The speed with which this issue wraps is a little bit awkward, but Invincible #132 is a solid read full of action, conflict and oh god, so very much blood, earning an impressive 3.5 out of 5 stars overall.  I’m looking forward to seeing how it all wraps up, and I’m sad that there’s only one year worth of Mark’s world left to read…

All-battle, blood and guts, with a shocking loss or two to make the final arc a personal war...