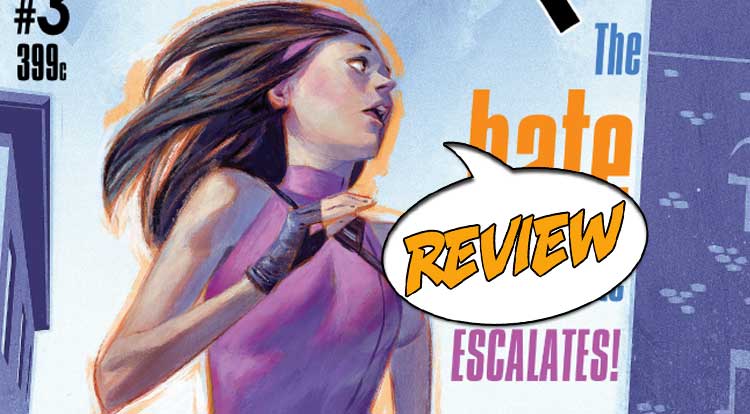 Kate Bishop is on the trail of a mystery, but can even Hawkeye get past a mind-controlled army of internet trolls?  Your Major Spoilers review of Hawkeye #3 awaits! Previously in Hawkeye: Hired by a young woman named Mikka to track down an online harasser, Kate “Hawkeye” Bishop thought everything was taken care of when she apprehended a man named Gort who was following Mikka and taking pictures of her without her consent.  Now, Mikka has gone missing, and her one suspect seems to be no longer an option, and worse, a group called ‘Take Back Control” may be behind Mr. Gort’s creeptacular actions…

We open with Hawkeye trapped at the end of a pier, surrounded by masked members of the TBC movement, all of whom are advancing in a menacing (but somehow not entirely in-control) fashion, leaving her no option but to jump into the freezing ocean.  As she tries, one of the masked folk tackles her, causing them both to fall into the sea, while allowing Kate to escape the mob’s intentions.  Her assailant is quickly revealed to be LAPD Detective Rivera, who warns her to stay out of an active police investigation and also to avoid the strange yellow stickers that all the TBC types wear.  Kate tries to get more information, but Rivera reminds her that Kate isn’t actually a licensed detective yet, and so needs to back off.  One quick stop for donuts later, Kate decides it’s time to go undercover, tracing the last known location of Larry Gort and ending up…

…at a huge beach party.  Kate (along with a few hangers-on who insist on coming along) infiltrates, sneaks where she shouldn’t sneak and nearly falls out a window onto a necking couple before finding Mikka in a creepy basement dungeon.  And they are NOT alone.

The best part of the issue is Kate’s subtle sense of humor, especially as evidenced in her narration.  Throughout the issue, she assesses her Hawkeye antics with subtle self-deprecation and wit, and even when she’s clearly out of her depth, her humor remains sharp.  I love the art in this issue, as Leonardo Romero gives all the characters life and a wide range of facial expressions, and makes Hawkeye look great in her purple catsuit costume AND in a hoodie.  The sequence where she climbs out a bathroom window to make her way into another portion of the house is a particular standout for me, but the last-page reveal that a very large someone is in the basement with Mikka and Hawkeye is a “gasp out loud” moment…

THE BOTTOM LINE: LIKEABLE AND WELL-WRITTEN

As a fan of the Fraction Hawkeye, I am happy to relate that this book, while different in tone and intent, keeps a lot of the “barely functional, yet kind of brilliant indy ploy” nature of that book intact, even with a different, and kind of more competent Hawkeye as our lead.  Hawkeye #3 is a well-done mystery story that even works with modern technology in play, with lovely art and some truly excellent dialogue and writing, earning 4 out of 5 stars overall.  If you’ve been unsure what will happen to the Hawkeye brand now that Clint Barton is a criminal expatriate, you’ll be happy to know that Kate has the whole thing in good hands…

Reminiscent of the previous neer-do-well Hawkeye series, with a fresh voice and a wry sense of humor...