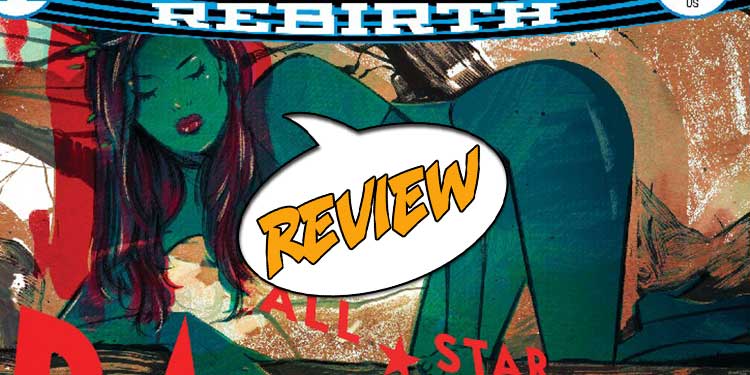 By Stephen Schleicher on February 9, 2017 2 Comments

How far would you go to save a girl and prevent a plague from spreading? Would you be willing to fight alongside one of your greatest foes? Previously in All-Star Batman: While tracking down Mr. Freeze, the scientist unleashed a virus that Batman thought he had contained. Now a mutation of the virus has been found, and he needs Poison Ivy’s help to cure it.

THIS ISN’T (THE) HAPPENING

This is an interesting issue to say the least. My first reaction when learning of a plant based pathogen that is killing people, was to worry that writer Scott Snyder had gotten into the liquor cabinet, and jammed on too much M. Night Shyamalan for inspiration. Thankfully, this issue is better than that, as it asks the all important question, “How far are you willing to go to do what is right?”

For Batman, the answer is his willingness to fight off a military unit that is dead set on taking Poison Ivy down. His actions could definitely mark the Dark Knight as an enemy of his country, but that’s not going to happen either, because I don’t think the military units taking down Mr. Freeze and Poison Ivy are from the U.S. – or at least I hope not.

For Ivy, Batman hit her in the feels by using the death of a little girl, who had a love of science and botany, as a way to turn her to his side. In the end She’s willing to let Batman go and give him the antidote, even though she has everything she needs to take him down. Snyder ends up giving us a nice psychological story revealing character motives and end goals without having to spell it out for the readers. It’s clear by the end of the issue Batman and Ivy are not truly enemies, they simply have different means to an end, which often puts them on opposite sides. I half expect we’ll see more Batman and Poison Ivy teaming in the near future.

I could have done without the wax lips gimmick though. I’m still bitter over 1997’s Batman and Robin.

While a great stand-alone story, readers will have a bigger perspective of what is going on if they read All-Star Batman #6. While it will help make Batman’s quest more clear, the other reason to read both issues back to back is the amazing art by Tula Lotay. Her watercolor work in this issue is fantastic as Batman heads to Death Valley. There, Lotay lets the oranges, reds, and browns tell the story of a dead landscape that offers little hope for life. Ivy is perfectly at home in this setting as she works with a 5,000 year old tree, and though we do get a few greens in the issue it is the wonderful Earth tones that make the issue work.

This is direct contrast to the previous issue where Lotay utilized whites and blues as the primary palette, throwing in red when needed. Together the two issues shine as an excellent example of using color to bring location and character motives to life.

At $4.99 All-Star Batman #7 seems like an overly expensive book. However, the end result is totally worth the price. Snyder gives us an action packed issue that features fighting and explosions, while at the same time there is a subtle story being told that will make you want to reread the issue more than a few times to take it all in. Tula Lotay’s work is brilliant in every page and panel, and again will draw you back to previous pages just to see how great it looks.

Action and drama slam together to tell a fantastic tale of two enemies fighting for what is right.