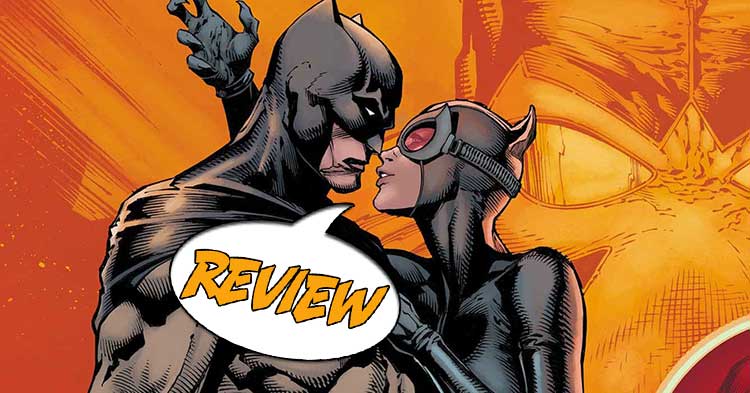 By Stephen Schleicher on February 6, 2017 0 Comments

How do you eat your hamburger? Previously in Batman: After Catwoman stole his heart, Batman is ready to get down to business. But first, he is going to take his kids out for lunch…

At some point celebrities, even those that haunt the city by night, are going to get a large enough following that someone, somewhere is going to try and make a buck off their notoriety. It makes sense that a fast food restaurant would pop up in Gotham featuring menu items based on Batman, his sidekicks, and his rogues gallery. Yes, Jokerizing your food is probably in very poor taste (no pun intended), but considering how we fetishize our celebrities, it feels like Tom King is making a larger commentary on celebrity, and how someone like The Joker is normalized and presented in an easily digestible package that the populace will easily swallow. It becomes even more weird when Jason Todd specifically mentions his death by crowbar at the hands of the Joker, yet is still totally okay with Jokerized Seasoning. While it may get a laugh out of most readers, the underlying psychological statement being made is scary as $h!+.

Don’t get me wrong, there are plenty of funny moments in this sequence. The “kids” fighting with one another, the stuck up rich guy eating his hamburger with a knife and fork, to the snarky comment about Alfred’s cucumber sandwiches, do bring a smile to your face. I don’t know the current status of Batman, Inc. but it feels like somewhere the Bat-Lawyers are prepping C&Ds or at least figuring out some way they can get their cut of the Red Hood action figure sales.

The real story in this issue isn’t A Meal With The Family, but rather Bane Is Coming To Town. Bane needs Psycho Pirate to counteract the side effects of Venom, and at the same time Batman needs Psycho Pirate to help Gotham Girl. Someone is going down, and the three bodies hanging in the Batcave at the end of the issue may mean one side is short a few soldiers. It is the shocking moment that kicks this issue into high gear, and it comes in the closing page to make readers beg for the next installment. It’s a good ploy, but it can make the issue feel like we were just served a Batman Special with a side of Joker Fries.

David Finch’s art is spot on in this issue. From Mark’s Batburger uniform (which fits about as good as Alfred E. Neuman in his Batman cowl), to the skin tight costume of Selina Kyle’s Catwoman, the details added to each panel is everything I want in all of my comics all of the time. There is no Generic White Guy #1 or Asian Woman Pose #34 in this book. Instead of relying on a stock library of characters, each figure in the issue feels different and unique. Batburger looks like there is a thin film of grease on everything, while Wayne Manor looks like a fine layer of dust has settled in the places Alfred can not reach. Jim Gordon looks like you expect a cigar to smell.

BOTTOM LINE: ONE OF MY FAVORITES

If you are a lapsed Batman reader, Batman #16 kicks off a new arc, and is a perfect point to rejoin the story. Though finer details may be missing (like who is Gotham Girl), the fact that Bane is back in town, and Batman is worried is enough to bring you back into the fold. Tom King presents a solid story, and enough meta commentary to keep fans talking about this issue for years. David Finch’s art is stunning and never disappoints even though there are many moments in the issue where shortcuts and slack could have occurred. Batman #16 is one of my favorite books I read this last week, and one that is certainly worth heading back to your LCS if you didn’t grab it the first time.

Tom King presents a solid story, and enough meta commentary to keep fans talking about this issue for years.