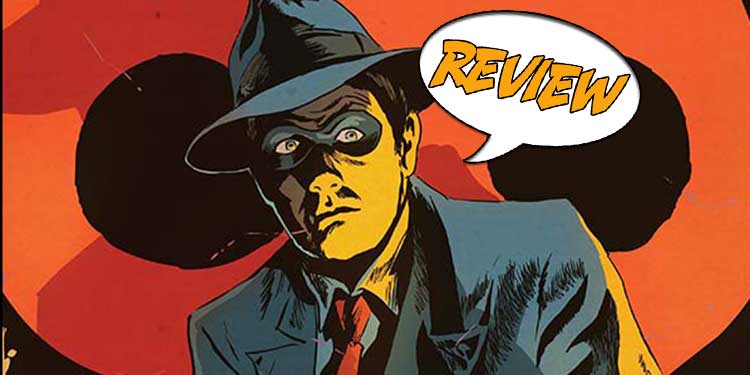 The Spirit: The Corpse-Makers #1 Review

The Spirit returns in a new mini-series from Dynamite Entertainment. It’s a tale of mystery from creator Francesco Francavilla. Previously in The Spirit: It has been six months since we last saw The Spirit in Matt Wagner’s 12-issue mini-series. Now that Mikado Vass has been defeated, can The Spirit find a moment of peace, or will a murder draw him back in to a new mystery?

One of the hallmarks of a great story is the ability to connect seemingly random elements into a grand story. As a writer, Francesco Francavilla understands this, as the story opens with a random death of a homeless person, and by the end of the issue, not only do readers learn Ebony has a cousin, but he’s involved in a bank robbery which ultimately results in yet another dead body in the hands of a mysterious robed figure – The Corpse Makers. There are also other random clues hinting at something bigger, including a discussion of Red Coal. I love a mystery that is set up this way, and providing Denny Colt follows the clues, this could be a fantastic tale that pays homage to the classic pulp tales of yesteryear.

For years Ebony White has been a character that straddles the line between ’40’s inherent racism and a much needed sidekick that makes The Spirit’s adventures work.  For the last couple of years, writers have tried to figure out a way around the name – one that in hindsight even Will Eisner had regrets. In Matt Wagner’s run, it was revealed Ebony’s full name is Aloysius, and here, Francavilla simply has everyone refer to him as EB. I’m totally on board with the changes in both Wagner and Francavilla’s run, and would be totally okay if creators came up with an all new name for the character in the future.

I don’t know Mr. Francavilla personally, but based on his Black Beetle series, it appears he loves (and understands) characters like The Spirit, The Shadow, Doc Savage, and more. He’s written mystery/adventure tales before, and based on this first issue, I think we are in for a wild ride. The Spirit: The Corpse-Makers #1 is an excellent example of how to kick off a story.

BLACK AND BLUE AND RED ALL OVER

Francesco Francavilla has a very distinct look in all of his art. It’s moody and dark, and makes you feel like you are stuck in a 1930s black and white noir film. However, Francavilla does add color to his work, and he usually relies heavily on blues and reds. While this makes this work instantly recognizable, some think it is the only colors he uses in his comics. Those people would be wrong. Every page in The Spirit: The Corpse-Makers is a masterpiece of color – blue is the primary color with hints of purple, yellow and red scattered throughout. Yellow looks like it is going to play a major role when it comes to color in this story, and almost gives a “That Yellow Bastard” feeling to the issue.

Color aside, Francavilla’s art is fantastic. The detail he brings to the entire environment make Central City come alive as you can feel the grime and filth on everything. His rendering of cars is stunning, and I could look at the double page splashes in this issue all day.

The Spirit is a character that has and should remain timeless – kept in the time period where his exploits seem larger than life. The Spirit: The Corpse-Makers #1 is a delight to read, and the art blows my mind as always. Fans of pulp mystery will want to pick up this issue right now, and add the series to their pull list.

Fans of pulp mystery will want to pick up this issue right now, and add the series to their pull list.