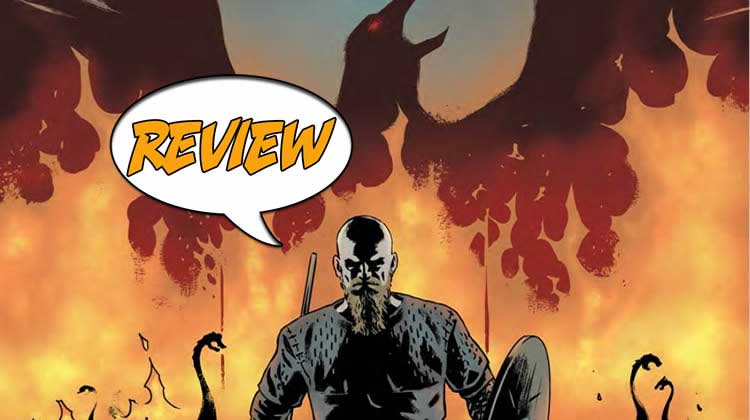 One TV show I enjoy a lot is Vikings, which appears on the History Channel. Is it accurate, historically? No, it’s not, but it’s something different, and I enjoy that. When I heard Titan Comics was making comics based on the series, I was thrilled… especially when Cavan Scott of Doctor Who fame was scripting!

On Wednesday, February 8, the trade paperback (collecting the previously released first four issues) will hit the stands, followed by it arriving in bookstores on February 21. Don’t wait for the bookstores, I say!

Previously in VIKINGS GODHEAD: From the chronicles of the History Channel’s truly epic series comes a new saga of glory and plunder! A brand new graphic novel featuring Ragnar, Lagertha and their legendary kin! An all-new epic tale as the Vikings set sail once more for England and run straight into a shield wall of politics, intrigue, betrayal and, of course, axe-wielding, blood-spraying, sword-swinging combat!

It can be pretty dangerous to create a comic based on a TV show. What if it doesn’t resemble the program? What if it gives away an upcoming plot point? What if the characters act differently than the series portrays?

Then, too, some folks just won’t buy a comic that portrays stories we don’t see on the small screen. “Hey, I want to see it in live-action, not in a comic that comes out monthly,” I’ve heard people say.

Me, I am more than happy to get another great story the show won’t or can’t tell.

Also, television has really improved its ability to tell stories in different historical eras. I think about shows like Copper and Vikings, that have transported viewers to other times and locales. We don’t have to travel to those places in order to enjoy things that could have happened there.

Of course, Titan is located in the UK, so they have much easier access to historical resources on things like Viking culture and characters. This helps this book resemble the program very closely, a strong selling point for those who watch the series.

Cavan Scott also brings a lot of experience in working with existing franchises from his Doctor Who comics, including the ones on the Ninth Doctor. He makes the people we’ve come to know on the small screen also at home on the printed page. He also has them do things consistent with what we’ve come to expect of them, always a great thing!

It’s always fascinated me that Ragnar has been so intrigued by England. Since he became familiar with Christianity through a captive of his, he has seen that entirely different way of life, and has also found the wealth and politics engrossing.

Of course, this comic takes place before the recent events on the show, but we won’t spoil those here! It doesn’t ruin the story for me, and it does fill in some of the gaps the show hasn’t been able to fill.

Lots of action and intrigue, plenty of surprises and character moments in this book. If you like Vikings the show, you’ll enjoy this comic as well!

It’s a huge challenge to make characters resemble the faces of the actors who portray them on TV. However, Staz Johnson does a great job in helping us know who is who as well as what they’re feeling and saying. Well done!

I also like the way the art portrays the surroundings, including the ships, the villages, the countrysides and the weapons. I almost forgot I was reading a comic since it was so accurate and moving!

BOTTOM LINE: If You Wanted More Vikings, You Got It!

The relationships continue, including the fascinating one between Ragnar and Floki. Ragnar’s shifting his religious belief system put a serious impediment between the two, and that comes into play in this trade as well.

As far as a comic being close to a TV program, this one is one of the very best I’ve read! Vikings fans, don’t miss this trade, especially if you didn’t get the individual issues. I also think you’ll enjoy the interviews with the show’s creators at the end of the book. There’s a lot of great insight there to be discovered!

I highly recommend this book to anyone, actually, whether you’re a fan or not. The creative team helps those unfamiliar with the show dive in head first by providing a page telling you who is who and what they’re about early in the book. Hey, you might even go back and watch the series if you like it!

If you like Vikings the show, you’ll enjoy this comic as well!