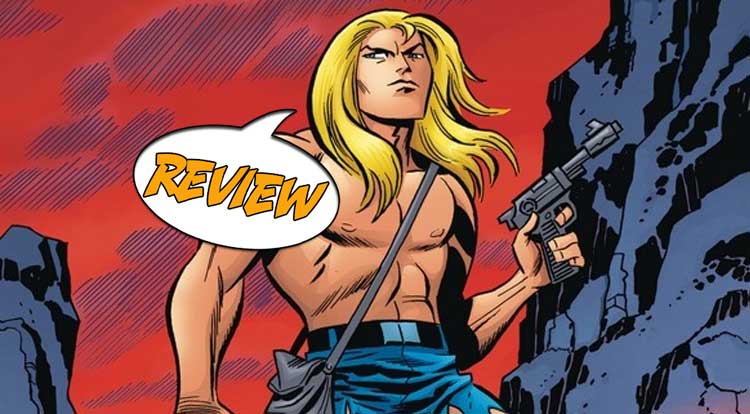 Previously in The Kamandi Challenge: After an unsuccessful bid for the rights to ‘the Planet Of The Apes’ in the 1970s, DC EIC Carmine Infantino tasked Jack Kirby with creating a similar concept to cash in on that sweet post-apocalyptic wasteland cash.  More successful than Kirby’s other 70s DC work (ironic, given the prominence of the Fourth World properties in modern DCU tales) Kamandi lasted until the DC Implosion of 1978, telling tales of the last boy on Earth in a furutre world after The Great Disaster wiped out civilization.  Now, Kamandi is back, but the format is a little bit unusual…

Back in the pre-Crisis days, during the doldrums of the comic industry, DC Comics commissioned the DC Challenge, a comic book version of the ‘Exquisite Corpse’, wherein each creative team picked up after the previous issue’s story and added their own twists using DC’s stable of superstars, from Adam Strange to Zatanna.  The series turned into a huge cluster, the final issue of which reunited 6 of the writers in an attempt to unsnarl what they had wrought.  This issue picks up where that series left off, metaphorically speaking, with a young man awakening on a day identified as “not quite today, not quite tomorrow.”  Our young man is late for school, and rushes off toe catch the bus he has missed, only to have all hell break loose.  The people of his village reveal themselves to be robots, and animal creatures are literally falling from the sky (or at least rappelling from the top of the previously invisible dome over the city.)  He rushes home to his Grandmother who may or may not be related to Brother Eye, and receives only strange prophecies for his trouble, including “Remember Command D!”

BUT WILL IT PLAY?

Part one of the story ends with our lad, now named Kamandi by his captors after the words he murmured in a half-conscious state, thrown into an arena to fight a mighty gorilla named Tiny.  That story is resolved immediately in chapter two, as Dan Abnett picks up the reins and introduces additional complexities into Kamandi’s world.  The difference between the two chapters is night and day, with Keith Giffen’s grungy pencils giving way to the slickness that is Dale Eaglesham, while Abnett’s portion of the story feels more coherent (and much more engaging in narrative) than Dan Didio’s chapter one.  Neither part really suffers, though, as the opening is kinetic and shocking, while the second chapter engages in more world-building, ending with King Caesar of the Tiger-Men activating a nuclear weapon in the hopes of speaking to the ancient “gods” he believes live within it.

The text material at the back of the issue implies that this series came about because of multiple competing Kamandi pitches, but I’m not entirely sure that I believe that.  After all, Kamandi’s most recent appearances were circa ‘Countdown’, a story that was not only dreadful, endless and dull, it was utterly forgettable, even if you read every issue.  The Kamandi Challenge #1 is a well-done first issue of a concept that I’m 100% excited for, even if it ends up as a giant clusterschmozz, featuring two different (excellent) artists and a couple of fun cliffhangers, earning a well-deserved 3 out of 5 stars overall.  I don’t know if they can keep up this level of quality for the entire run of the series, but it’ll be fun to see them try…