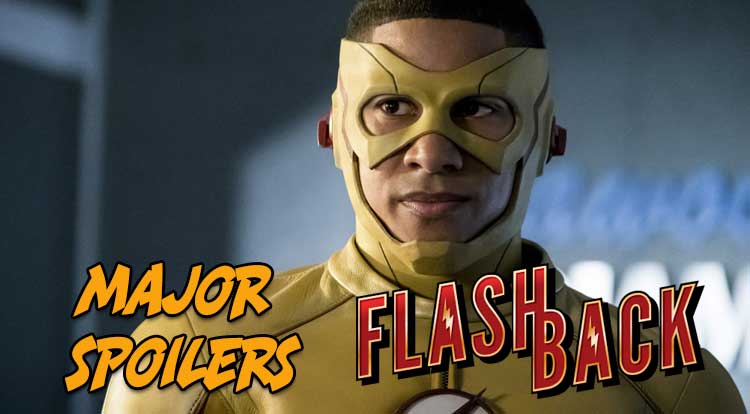 The Flash is back, and this week Barry must ponder the age old question, “Which is more of a problematic, borrowing the problems from the future, or getting a ten year loan with a zero down payment?”

Barry is tormented by his vision of the future where Iris is murdered by Savitar. When a criminal named Plunder shows up in Central City, Barry recalls the Villain’s Presence in his vision of the future and fears that if he catches Plunder, it will cement Iris’s fate. Confused about Barry’s hesitation to stop Plunder, Wally decides to step in as Kid Flash. Meanwhile, Caitlin offers Julian a job. Yes, Plunder (aka Jared Morillo) is a real Flash Rogue. Plunder first appeared in Flash Vol. 2 #165, which means he was created by Angel Unzueta and… wait for it… Geoff Johns.

Mirror Master has access to many different realities, and thanks to his mirrors, the Rogues were able to find Plunder, a mirror world version of Detective Jared Morillo.

Once in the real world, Plunder joined Blacksmith’s Rogues and his objective was to help ruin Flash’s life by attacking his loved ones. His first target was Flash’s best friend, Chunk, whom he shot with a special bullet that made Chunk’s powers flare and turned him into a living black hole.  – via The Flash Wikia

How do you get rid of Plunder? In comics, Zoom shows up, tells Plunder he doesn’t belong in this world, and shatters him into a bazillion pieces. Apparently if you come from a Mirror Universe, you simply have to break that character like a piece of glass to send him back. Hey, it’s probably easier than getting him to say “Rednulp.”

Greg Grunberg appears once again this week, causing another round of “Ugh, that guy…” to be heard around the Major Spoilers HQ.

H.R. gets his wish this week and opens the STAR Labs Museum. Unfortunately, it doesn’t go as planned. Perhaps people are more interested in something more than just science.

Say it again because it is fun!

Maybe what everyone really wants is a Flash Museum.  While we don’t get an official Flash Museum this week, we have seen it multiple times in the series when Barry is running through the Speed Force. When the Flash Museum finally shows up, we’ll discuss it more in this series, but until then, there is one interesting similarity between the STAR Labs Museum and the Flash Museum – everyone believes the weapons and bits of ephemera on display are props and replicas, when in reality they are the real deal. This has caused many problems for the Flash over the years. I wonder how many of those gadgets and gizmos sitting in the lobby of the STAR Labs Museum are ready to cause mayhem?

The biggest geek moment of this week’s episode has to be Rip Hunters Chalk Board. For those who enjoyed the tremendously successful 52, one of the hallmark moments was when Booster Gold and Skeets made it into Rip’s lab to discover a chalk board covered with hints and clues about the future of the DC Universe. H.R. creates a similar board this week when he writes down all the headlines seen in the future on Channel 52.

There are 13 episodes left in the season, and it looks like it is going to be a busy one for Barry and friends:

May 23, 2017 – Currently, the date is a Tuesday, and one would expect that to be the season finale of the show. That being said, IMDB, which can be edited by anyone, currently lists May 24th as the season finale, which makes me wonder how much of the timeline Team Flash is able to change.

Luigi’s Opens After Murder – This is pretty vague, and with no specific character or restaurant in the DCU featuring that name, this could refer to just about anything. Berlanti Productions is also very quiet on the synopses for future episodes, so this one could happen anywhere… or no where. Flash doesn’t have to fix all the news items just the right ones to keep the domino effect from killing Iris.

Joe West Honored at City Hall – It’s about time, Joe. But really, why would anyone want to change this headline?

Killer Frost Still at Large – So, Killer Frost is still at large. That does not mean Killer Frost is the Caitlin Snow we all know and love. With more portals opening, and things coming from other Earths, this could all be a case of mistaken identity. I hope…

City Still Recovering Following Gorilla Attack – We know that Gorilla Grodd returns this season in a two part story that takes place on Earth-1 and Earth-2.

Apparently, if you are a citizen of Earth-19, it is illegal to move from one Earth to another via portal jump. Gypsy’s appearance at the end of the episode sets up next week’s “Dead or Alive.” We’ll share  more information on the newest Justice League Detroit member to show up in the Arrowverse next week!

McSnurtle the Turtle has been name dropped previously. When Iris was first moving out of the West household, which was also the tenth episode of the season, Joe brought down a stuffed turtle that he called McSnurtle. In comics, Merton McSnurtle (aka McSnurtle the Turtle) is a shopkeeper who lives in the town of Zooville in the parallel universe of Earth-C (or alternate dimensions depending on which side of the Crisis you are standing on). Granted powers by the nice Prince Highness and the nasty Prince Lowness, McSnurtle can remove his turtle shell and don a costume similar to the Golden Age Flash and use his super-speed to do good deeds.

The Terrific Whatzit first appeared in Funny Stuff #1 (Summer 1944) and was created by Martin Naydel.

One new person to add to the list this week, though she’s only being added by osmosis, as she A) doesn’t speak English, and B) would only know Barry is the Flash if she’s allowed to walk around other areas of the STAR Labs Museum.