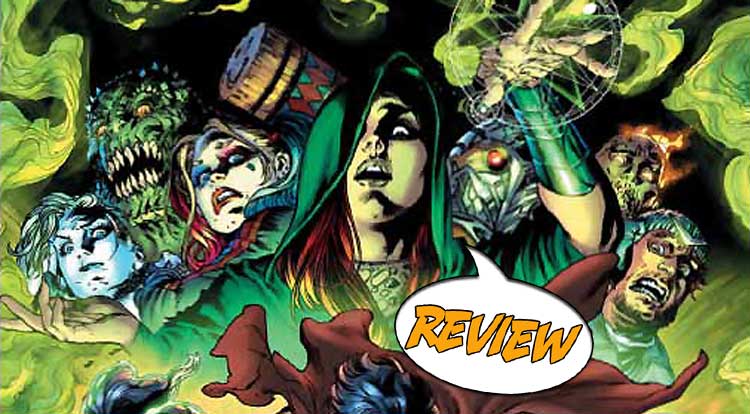 Chaos is unleashed, and only the Dark Knight can stop the pending apocalypse (with a little help from Amanda Waller and her Squad.)  Your Major Spoilers review of Justice League Vs. Suicide Squad #5 awaits!

THE END OF THE WORLD

As we open, six members of the Justice League are completely under the control of Maxwell Lord and the Eclipso diamond.  Only Batman remains free, allowing the other members to use their powers to immediately take over the United States, with Superman personally smashing his way into the Oval Office to install Max as overlord.  (Yes.  It’s a pun.  I enjoyed that.)  At the same time, Deadshot and Batman are forced to work together to save Amanda Waller from certain death, breaking out of a collapsed building to find the Suicide Squad in battle with Cyborg.  Victor Stone, however, is a very smart man/machine hybrid, and has programmed his machine half to resist mind control of his human half.  Batman is unable to stop Superman from taking Waller, but assembles the remaining members of the Squad, as well as a regenerated Lobo (who had his head blown off last issue) to challenge his teammates and shake their control.

And then, Eclipso himself arrives…

This issue features a number of moments that homage the comics of the 1990s, with Lobo front and center and unstoppable, the heroes possessed by Eclipso much like the summer annuals of 1992, and of course, the unstoppable, implacable, always prepared Batman.  To be honest, though, Batman isn’t a problem in this issue (though he does survive a punch from Superman, which concerns me a bit) so much as Max Lord is, and when Amanda Waller slaps him right in his big, stupid face to shake Eclipso’s control of him, I have to admit I cheered a bit.  This issue’s plot featured a few too many moving parts and sudden switches to be coherent, and multiple inkers leave the art equally inconsistent and all over the place.

Your enjoyment of this issue, thus, will hinge upon one of two things: Your personal love of the bombastic comics of the 90s or your tolerance for loud, brash, unapologetic comics that don’t care about anything more than telling a big ol’ superhero tale full of sound and fury and such.  Justice League Vs. Suicide Squad #5 isn’t exactly my cup of tea, but it has a lot of things going for it (and it admittedly makes Lobo pretty fun to read about) earning a slightly disappointing 2 out of 5 stars overall.  As a story designed to capitalize on the DC movie universe, though, it could certainly appeal to audiences who are into the tone of ‘Suicide Squad’ and ‘Batman V Superman…’

Too many moving parts, too much of the old ultra-violence, overwhelming a script with some interesting bits...