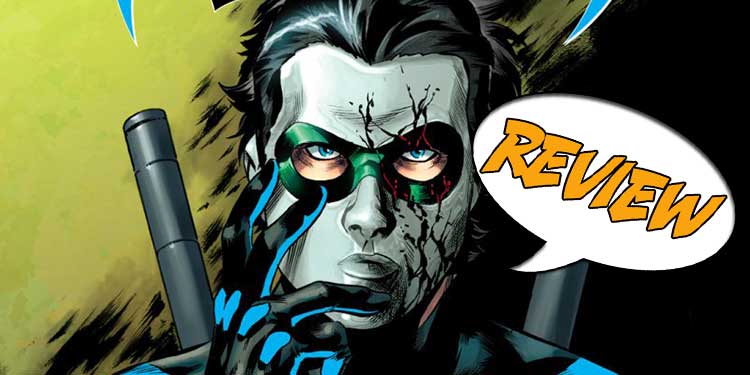 Now that Orca and her gang are out of the way, Nightwing and the Run-Offs need to find the real killer! Can they do it in time, or will it be too much for the newly formed team? Previously in Nightwing: The body count in Blüdhaven continues to rise! Nightwing will have to team up with the Run-Offs to discover who the murderer is and clear the name of the Defacer. But before they can even begin they cross paths with the killer, Orca, and her Whaler Gang. – DC COMICS

PREVENT THE INNOCENT FROM DYING, INCLUDING YOURSELF

As the Bludhaven arc continues into its fourth installment, the story takes the necessary turn, and the villain is revealed. It’s a “Nice” reveal, and the explanation of how he is able to commit those crimes makes perfect sense. Nightwing may have solved part of the mystery, but he’s not out of hot water, as the police are ready to throw him in jail and shoot on sight. The villain hasn’t been brought to justice. Instead, the Run-Offs walk away, and the Defacer both helps and hinders Nightwing’s efforts to stop the serial killer.

I’ve always been a fan of Dick Grayson in Bludhaven. When the character first made the move in 1996, it felt like a fresh start for Nightwing, as he once again attempted to move out from the shadow of The Batman. There was hope and a bit of fun (before Blockbuster ruined it) in the series, and it made Nightwing an interesting character again. This time around, Tim Seeley offers up a noir tale where no one is going to come out unscathed. This is a dark issue. We know Nightwing is going to come out on top, and prevent stolen alien tech from killing people, but until he can get away from the gun at his head, readers are left feeling tense, betrayed, and cold.

Marcus To offers up some fantastic character work in this issue. Characters have weight and purpose in every panel, and no space feels wasted.  Panels are framed cinematically, without resorting to giant double page spreads that scream, “THIS IS LIKE A MOVIE, GET IT!?”  The only thing that feels off is how smooth everyone’s skin is. Unless the character is “really old,” like Mayor Madrigal, everyone’s faces are rendered in a way that makes them look like 13 year olds. It’s disconcerting in several panels, but easy enough to get used to as the issue progresses.

The coloring in this issue is really interesting. Instead of bright colors and digital effects, Nightwing #13 has a dingy feel to it – colors smudge and blend in odd ways. There is a retro feel to it, almost like Bludhaven hasn’t moved forward since the ’70s. Colorist, Chris Sotomayor does a great job in using color to make Bludhaven feel dirtier than the rest of the DC Universe.

BOTTOM LINE:  SO WORTH IT

Tim Seeley does a great job telling the tale in Nightwing #13, and I can’t wait to see how it finally plays out. The art team of Marcus To and Chris Sotomayor bring a noir feel to the entire issue. In short, Nightwing #13 is a pleasure to read, and if you haven’t read the series, this issue may make you change your mind.

Tim Seeley does a great job telling the tale in Nightwing #13, and I can't wait to see how it finally plays out.