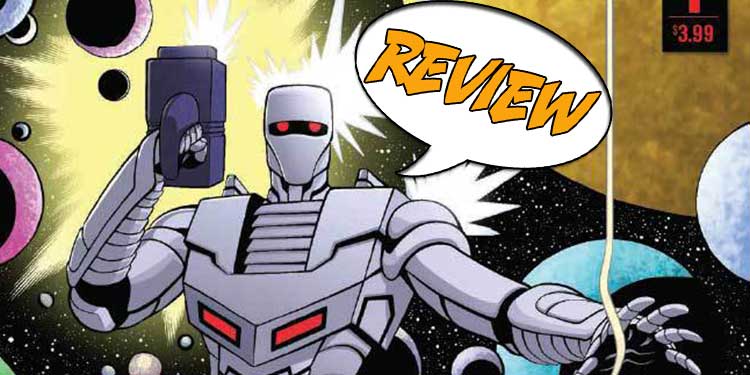 With the Hasbro universe now united at IDW Publishing, it’s time for the best of the best to take on the worst of the worst! Previously in Revolutionaries: Once upon a time, there as a toy company that needed a way to sell its product, so it created a bunch of television series that weren’t 30 minute television commercials for their toys, because that was against the law. The toys were so popular that comic books were created based on their adventures. Then, the core audience grew up. One day, the toy company and a comic book publisher decided to answer the one wish every kid had back in the day, “I wish my G.I. JOES actually teamed up with Transformers.”

And so began The Revolution!

Rom arrives on Earth. Optimus Prime annexes the Earth. Ian Noble becomes the Action Man. A Dire Wraith masquerading as General Joe Colton is killed. G.I. Joe is brought back into action. M.A.S.K. is formed. The Micronauts arrive on Earth. The combined power of the Autobots, G.I. Joe, M.A.S.K., Rom, Action Man and the Micronauts defeat Baron Karza, the Dire Wraiths and Miles Mayhem. The Revolution is over. But the Revolutionaries are just beginning…

NEVER BRING A GUN TO AN ALIEN INVASION… ACTUALLY, THAT’S PROBABLY THE BEST TIME TO BRING A GUN…

When alien technology transforms the entire city of Verenya into Dire Wraiths, the JOEs are first to respond. What follows feels like the middle act of Aliens, with Dire Wraiths attacking the team left and right. Fortunately, ROM, Blackrock, Action Man, Kup, and the Oktober Guard all show up as everyone attempts to secure the device that turned the city into aliens. There are a lot of explosions, a lot of quips exchanged, and a lot of action.

A lot of action.

With so many characters appearing in the issue, and each needing to say “something,” the issue quickly becomes a crazy mess. Though it is not the fault of series writer, John Barber, I feel like this whole event was put together by an eleven year old who dumped his Hasbro toys on the table and started making stuff up as he went along. That isn’t necessarily a bad thing, because there are some interesting character moments that come out of this issue, but WOW… getting to those moments…. Readers will cheer as their favorite characters gets to punch a bad guy, or feel sorrow when characters fall. In short there is something for everyone. The potpourri mish-mash of story elements and characters make me feel like I had missed something, or that there was a tie-in issue somewhere that explored the action between some of the panels.

The art is the best part of the issue. There is a fluid nature to everything Fico Ossio puts to panel, and even though there is a solid feel to characters and buildings, everything flows together. There are some artists who do a great job on characters, while some are mechanical in their renditions of buildings and cars. With ROM, G.I. JOE, and Transformers running around, Ossio has a strong foundation on everything which makes it work on the page.

Complementing Ossio’s art is the color by Sebastian Cheng. Panels and sequences have a color tone (especially in the backgrounds) that ties everything together. At the same time, characters pop on the page, creating separation from the detailed backgrounds.

BOTTOM LINE: BUT WHAT ABOUT MY LITTLE PONY?

Revolutionaries #1 is a fanboy dream come true. With a combined world of heroes and villains, the sky is the limit with the type of stories that can be told. The biggest problem with the issue is combining properties may also be the series biggest undoing. While I’m sure there are those who are fans of everything in the Hasbro universe, those that inhabit that particular section of the Venn Diagram are going to be few. In the long run, each property will no doubt keep their own series going strong with occasional crossovers with one another, but right now Revolutionaries #1 feels like a smoothie gone awry.