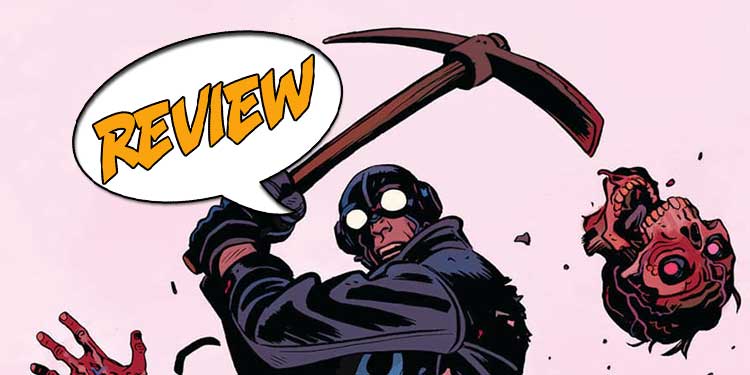 Lobster Johnson is back! Dark Horse Comics released Lobster Johnson: Garden of Bones, a new one-shot, and it looks like the undead are restless… again! Previously in Lobster Johnson: Lobster Johnson was able to bring down the Metal Monsters of Midtown, and how gone back into the shadows, waiting for the next big adventure.

NEVER BRING A GUN TO A ZOMBIE FIGHT

When local gangster and mob enforcer, Benny Jeunot went down, everyone thought he was gone for good. That is until he started killing police officers. Lobster Johnson and Harry McTell know something is up and head to the cemetery to find out once and for all if the dead are walking again. Turns out, the dead are awake and are under the control of three Fimbakonu priests. A couple of fights later, and Lobster Johnson is able to serve up justice (which means the bad guys are all dead).

Lobster Johnson: Garden of Bones is a very quick read. Faster than I thought it would be for a one-shot story. I think the reason for the quick pace is due to two major fight scenes in the issue – one between Johnson and zombie Jeunot in the grave yard, and an all out brawl to end it all between the team of Johnson and Tell, and a horde of zombies in a crypt deep beneath the cemetery. Though I do enjoy pulp stories that have a natural explanation for the supernatural goings on, the world Mike Mignola has created works best when Voodoo and Fimbakonu are real. Here, Tell explains the how and why to take down the undead, and it works – if follows rules, and having a set of rules that are adhered to throughout a long running series make the world seem even more believable.

HOW TO TAKE DOWN A CHOMBO

Stephen Green’s art in this book is exactly what I expect to see in a Lobster Johnson tale. Dark grave yards, scary monsters, and evil forces conspiring to kill, are made even more intense with Green at the helm. Dave Stewart continues to bring continuity to the bigger world of Hellboy with his excellent coloring in this issue. One of the highlights happens during the flashback sequence where Stewart gives everything a red hue that contrasts with the dark blues of present day. Throw in a lot of undead and gun play, and the issue becomes a real page turner.

Though you know the heroes are going to survive, Arcudi and Mignola know how to spin the tale to bring tension and fear to the reading experience. This is a one-shot so you aren’t committing to anything going forward, but I believe if this is your first experience with the pulpy horror tales of Lobster Johnson, you’ll be back for more. Lobster Johnson: Garden of Bones is a worth picking up and reading right before you go to bed.

Lobster Johnson: Garden of Bones is a worth picking up and reading right before you go to bed.