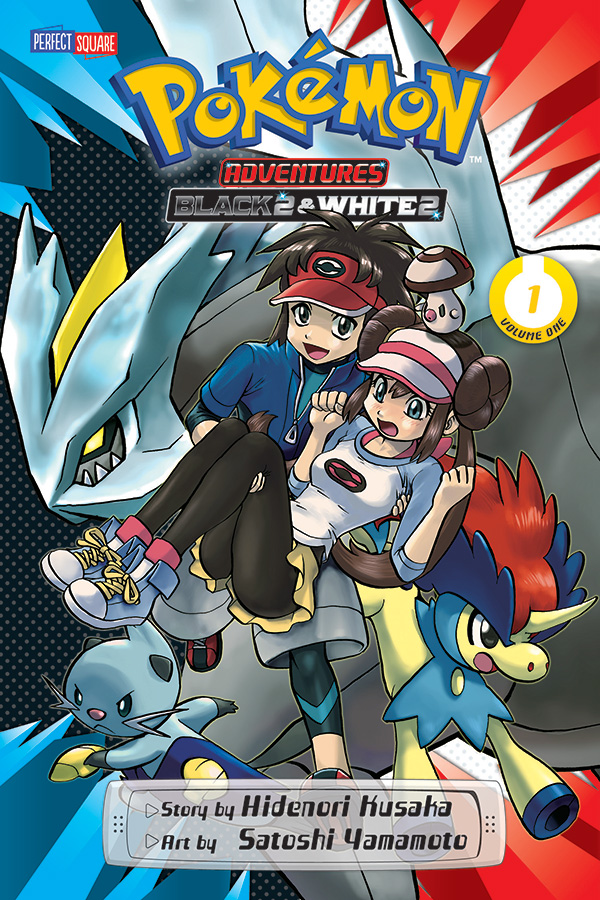 The series is written by Hidenori Kusaka with artwork by Satoshi Yamamoto, and is based on the best-selling POKÉMON BLACK 2 and WHITE 2 video games. The POKÉMON ADVENTURES: BLACK 2 & WHITE 2 manga series is rated ‘A’ for All Ages and volumes will carry a print MSRP of $9.99 U.S. / $12.99 CAN each.

POKÉMON ADVENTURES: BLACK 2 & WHITE 2 delivers a brand new adventure featuring readers’ favorite Pokémon game characters that jump out of the screen and onto the pages of this latest action-packed manga series!

“Get ready for tons of action and fun new characters and Pokémon in this special three-volume story arc,” says Annette Roman, Editor. “New adventures of Pokémon Trainers Blake and Whitley continue in this exciting series set after the dramatic events of POKÉMON BLACK & WHITE. We know fans of all ages will not want to miss this fresh story arc set in a Pokémon Trainers’ School!”

Two years have passed since Team Plasma was defeated and Trainer Black was sucked into the Light Stone along with Legendary Pokémon Reshiram. Now Team Plasma is back to its wicked ways, controlling other people’s Pokémon and even wild Pokémon with technology. Luckily, a new young hero and Looker of the International Police are on their trail.

Colress, the new leader of Team Plasma, is attacking the Unova region. His machines control Pokémon, wielding their powers for evil instead of good. Fortunately, a way to jam the signals is stored on a memory card. But who has the card…? A girl at the Pokémon Trainers’ School! Maybe that’s why our hero is such a flirt—he’s just doing his job gathering intel. But he’d better stop playing the field and find that card fast before someone beats him to it!

Established in 1986, VIZ Media is the premiere company in the fields of publishing, animation distribution, and global entertainment licensing. Along with its popular digital magazine WEEKLY SHONEN JUMP and blockbuster properties like NARUTO, DRAGON BALL, SAILOR MOON, and POKÉMON, VIZ Media offers an extensive library of titles and original content in a wide variety of book and video formats, as well as through official licensed merchandise. Owned by three of Japan’s largest publishing and entertainment companies, Shueisha Inc., Shogakukan Inc., and Shogakukan-Shueisha Productions, Co., Ltd., VIZ Media is dedicated to bringing the best titles for English-speaking audiences worldwide. Learn more about VIZ Media and its properties at www.VIZ.com.