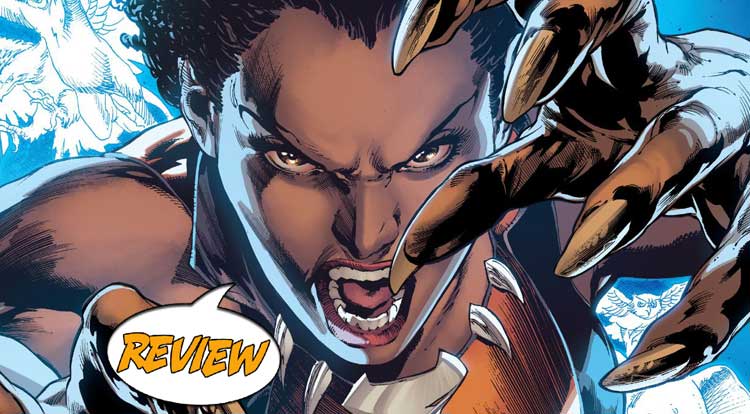 Mari McCabe has it all, money, fame, a dream job, super-powers.  Sadly, even with her successes, the past still has its hooks in the hero called Vixen…  Your Major Spoilers review of Justice League Of America: Vixen Rebirth #1 awaits! Previously in Justice League Of America: Vixen Rebirth: “She’s one of the country’s most successful businesswomen, an iconic fashion pioneer, a crusader for social justice and an incredibly powerful member of the Justice League of America.  But Mari McCabe’s life wasn’t always this way. Follow her path to becoming the heroic Vixen in this crucial special!”

Getting into comics in 1984 was interesting for me, as the remaining publishers were throwing everything at the wall to get the attention of their audiences, including a brand new Justice League featuring young heroes in Detroit.  Ignorant people mock the Detroit League, but they were something different, and they spoke to matters of representation in ways that modern comics still haven’t gotten straight.  This issue begins some nebulous years ago, with supermodel and philanthropist Mari McCabe on a talk show to discuss her newest programs for orphaned youth.  Things go bad when the host brings on one of the children she helps, who immediately calls Mari on the carpet for not actually being involved in the programs she touts as “hers.”  The girl’s mother has gone missing, and no one will help her, which triggers Mari to get involved, using an old family heirloom: The Tantu Totem.  (She wears it on a necklace here, which makes me miss when she wore the totem slung across her hips on that cool red belt, but that’s a minor issue in the grand scheme of things.)

A GREAT IMPROVEMENT OVER HER NEW 52 DEBUT

The rest of the story is Vixen coming to terms with her powers, her past as an orphan, and tracking down the man responsible for the missing woman.  Using her abilities very cleverly (she calls upon The Bear not for strength, but for his superior senses, and uses the power of the dolphin’s tail for a powerful finishing kick maneuver), Mari easily takes the man down, and as the issue closes, she returns to the talk show to announce her new project:  “Call me Vixen.”  Steve Orlando does good work here, showing us the downside of her glossy, celebrity life, giving us flashbacks to her childhood in Africa, but most of all, making Vixen a smart, capable, powerful hero that is fun to read about.  Jamal Campbell’s art is stunning, really bringing home the ‘beautiful model’ part of the equation, without short-changing the ‘superhero’ part, and the final page reveal of Mari’s new costume and look is first-rate work.

THE BOTTOM LINE: THE RESPECT  VIXEN IS DUE

It’s hard to talk about Vixen without talking about missed opportunities on the part of DC editorial, but this issue seems to be a step in the right direction, channeling the old portrayals (including her high-profile stint in ‘Justice League Unlimited’ cartoon form) and making something that feels fresh for DC’s first black female hero.  Justice League Of America: Vixen Rebirth #1 avoids the ‘tripping over continuity’ problems that has hamstrung the less-successful Rebirth titles, puts Vixen on a part with the rest of the League and has really lovely art throughout, early an impressive 4 out of 5 stars overall.  Given the character’s historical significance, it’d be nice to see her really build a solid heroic legacy…

A well-done restart for a character who doesn't get nearly enough attention and respect.