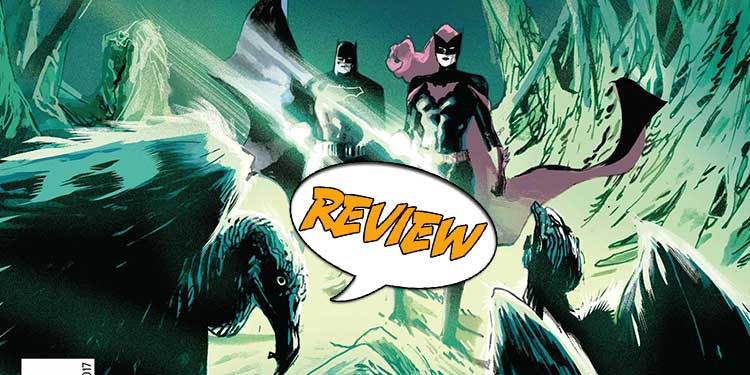 Following the events of Night of the Monster Men, a portion of Gotham City has been turned into Monster Town. How will Batwoman deal with the changes? Previously in Detective Comics: Batman has formed a small Bat-army, and the team came together to bring down the Big Bads. One of the key members of the team, is Batwoman. This is her story.

Look, my concerns about Monster Town have and always will be, “stay the Fudge away from Monster Town!”* Still, when you put up a big sign that says, “Keep Out,” chances are someone is going to ignore that directive. Such is the case when Batman and Batwoman arrive in Monster Town to discover there are those who want to weaponize Hugo Strange’s Monster Men formula. Already making moves is The Colony. That’s right, the vigilante group lead by Kate Kane’s father, Colonel Jacob Kane.

Even though Colony Prime is set on getting Colonel Kane out of prison, he is more than happy to try and take down Batman and Batwoman. More importantly, the arc becomes highly Batwoman driven, as we get a nice sequence featuring the Good Ol’ Days when Jacob and Kate were getting along, and a more recent time with Jacob in prison.  James Tynion IV and Marguerite Bennett have given readers a great launching point for this arc. The sins of the past metaphor does smack you in the face a bit, but that is okay; there are only so many pages and panels in the issue, and I think the duo have a lot of story to tell.   I’d rather they set it up now so our heroes can address the conflict sooner.

This issue also introduces Dr. Victoria October, a new character, but one who has a history with Batman. As it has already been revealed in interviews, Dr. October is a trans woman who will be in charge of Monster Town, and according to Tynion, we’ll see more of her in the future. The writers are keeping quiet on who Dr. October was before her transition, so if you are looking for a major revelation, you aren’t getting it here.  And really, I don’t think the “before” is as important as what Dr. October is going to do “now.” Bennet and Tynion have created a trans character whose transgender identity isn’t being exploited – it isn’t her only reason for being in this book. She is a new supporting character who is more than willing to help Batman and his team, rather than fight against their activities.

Ben Oliver’s art is stunning in this issue. There are moments when it feels like the Batwoman series from 2011, but remains clearly and distinctly Oliver’s style.  Oliver’s take on what happens when seagulls eat the monster meat is horrifying, and I’m sure I’m going to have at least one nightmare this week of them trying to kill me. To add to the feeling of unease, the coloring creates a brown fog throughout the book, which makes the reader wonder what is hiding in the shadows.

Finally, the layout of the issue continues to bring a non-standard structure to the book, allowing the story to flow as needed, but also allowing moments where characters become larger than life, bursting out of frame. Canted panels only add to the mystery and sense of unease our heroes face as they step back into the mess that has been created in previous arcs.

If facing your father’s past misdeeds isn’t enough for you, spooky remnants of the Monster Men look they will be part of the story for a while. Detective Comics #948 is a very fast read, but has hours of self-reflection and thought that can be put into it. If you are a Batwoman fan, then this is a great starting point for what is coming next. If you are Batman fan, and want to see Batman being Batman, this issue has that, too.

If you are a Batwoman fan, then this is a great starting point for what is coming next. If you are Batman fan, and want to see Batman being Batman, this issue has that, too.

*Though it wasn’t Fudge I said out loud.