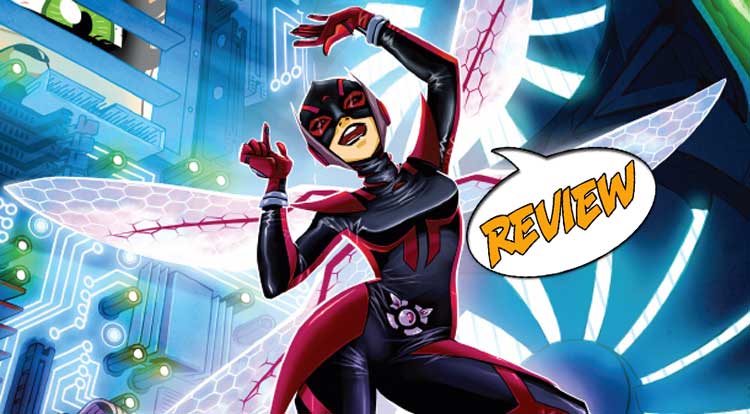 There’s a new Wasp in town!  But is she up to the task of carrying Janet Van Dyne’s legacy?  Your Major Spoilers review of The Unstoppable Wasp #1 awaits!

Previously in The Unstoppable Wasp: Before he was an Avenger, Henry Pym was just a happily married scientist.  Sadly, his wife was more than she seemed, and was taken away in the night by mysterious agents.  Recently, it was discovered that Maria was pregnant when she was kidnapped, giving birth to a daughter she named Nadia, who grew up in the Red Room, the same spy program that gave the world Natalia Romanova, The Black Widow.  Now, free of her captivity, Nadia has made her way to America to meet her father and join the Avengers…

As our story begins, Nadia Pym is out shopping with Ms. Marvel, seeking out all the experiences that she missed while trapped in The Red Room, starting out with balushahi, a type of Pakistani pastry.  The first few pages of the issue quickly explain what the new Wasp is all about, as she is peppy, friendly and emotive to everyone, from counter people to the woman at the Immigration Agency.  She also takes the time to tell us about her origins (a nicely integrated way to get that information into the issue) before a sudden giant robot attack drags our teen Avengers out into the street.  Of course, that problem is already being handled by Mockingbird, who is more than a little bit stunned to suddenly have two partners, especially given that one of them recognizes her for her scientific achievements, rather than her superhero career.  As the issue ends, the conversation with Mockingbird has led the Wasp to figure out what she wants to do with her life: To seek out female scientists and thinkers, and bring them to the attention of the world, while also fighting crime.

I really like the ideas that are laid out in this issue, and I appreciate the use of Barbara “Mockingbird” Morse as an inspirational figure for her mental facilities, rather than just her punching and staff-fighting techniques.  Having a main character who is so very upbeat and positive is going to be a balancing act for the creators, but (at least for me) this issue keeps it all together, even when she’s outsmarting Monica Rappaccini with her dance skills and knowledge of Dazzler’s back catalogue.  The art is lovely throughout the issue, with a few anatomical or layout anomalies as the story unfolds, but Elsa Charratier’s mastery of facial expressions overcomes those weaknesses.  I can’t help but think that the choice of gust-stars is deliberate, as well, and both Mockingbird and Ms. Marvel do a great job of giving what wrestling fans call “the rub” to The Wasp.  I have vague concerns that having too many people tell us how wonderful The Wasp is (as happens a couple of times during the issue) is going to alienate audiences, but only if it continues in the long run.

THE BOTTOM LINE: A BIT FRENETIC, BUT LIKEABLE

In short, while I miss Jan Van Dyne, this is a solid first issue of comics, with a main character that I enjoy seeing in action.  The Unstoppable Wasp #1 gives us an interesting new start, a couple of Harry Potter references, and a lot of girl power, with the caveat that Nadia’s big personality may not be for everyone, earning 3 out of 5 stars overall.  I’m absolutely in for the first arc of this book, and even hope to see more of Mockingbird (and maybe Moon Girl and other smart Marvel heroes) as part of the new Wasp’s world…

An interesting start, with a main character who borders on (but never quite crosses into) annoying, and some nice guest-stars...