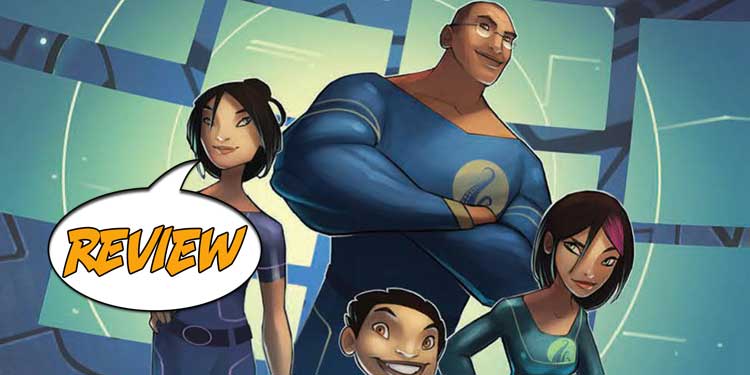 By Stephen Schleicher on January 9, 2017 0 Comments

BOOM! Studios launches a new mini-series with Tom Taylor and James Brouwer this week. Will The Deep #1 sink or swim? Previously in The Deep: Journey into The Deep with the daring aquanaut family, The Nektons, aboard their state-of-the-art (and oh, so shiny) submarine, The Aronnax. When an earthquake off the coast of Greenland leads to strange reports of monster sightings, William and Kaiko Nekton, along with their kids, Fontaine and Ant (and of course, Ant’s pet fish, Jeffrey), dive into the mystery!

The Deep was originally published at Gestalt Comics (out of Australia), before getting the animated treatment in 2015. The animated The Deep series was originally broadcast in Canada, and now has been picked up by Netflix. So what we are really reading in this first issue is a reprinting of the “Here Be Dragons” story from Gestalt. There is nothing wrong with this practice, as American publishers have been doing this for years.  It allows lesser known works from international publishers to find an audience in the States, and in the case of this series, I think it was a great move by BOOM! Studios.

The series kicks off by introducing us to the Nekton Family, a family that travels the ocean in a high-tech submarine, doing all sorts of “science” under da sea. Having a multiracial family myself, it is great to see that reflected in this series. While some may turn their nose up on this, it does reflect the makeup of more and more families. For younger readers that are part of similar family units, this gives them someone to identify with. Plus, they are all about science! SCIENCE! Or, in the case of this story arc, the quest to see if dragons really exist. Will, the father of the family, has discovered some old maps that have the classic “Here be Dragons” indicator, and though many toss the idea aside as myth, recent activity in Greenland, has him thinking different.

When the Aronnax arrives in Greenland, they don’t find a dragon, but they do find half of a blue whale… something chomped it in half… something really big…and really ancient.

I’ll be the first to admit that my knowledge of sea life and the sciences attached are limited, so I’m going to go out on a limb and say this book is a mix of fantasy and hard facts, which make learning fun for the target audience. Heck, I’m not the target audience, and I learned about Hans Egede, and the sightings of sea monsters off the coast of Greenland in 1734. Throw in a bit of adventure, and a science kid in peril as the cliffhanger, and you have the makings of a fun story.

I don’t know if Tom Taylor and James Brouwer intended to have the series turned into an animated series, but Brouwer’s art certainly looks and feels like animated cells put to paper. Seeing Will’s expression has he convinces his wife, Kaiko to go on the adventure, is right out of a Disney Afternoon series. The kids are great, and Ant and his pet fish steal the show.

Obviously a blue and green color palette is to be expected when 95% of the issue takes place below the waves, but there were a few times it was harder to make out what was going on in certain panels and pages. Other than that, the art in The Deep is something I would be happy to look at again and again.

BOTTOM LINE: I CAN SEE WHY EVERYONE’S EXCITED

Reading through the first issue of The Deep, it is easy to see why everyone wants to nab this property. The Deep is extremely well written, with a family that seems real – or at least real enough – with science adventure as the cherry on top. The art is wonderfully done and will certainly appeal to younger readers. Overall, The Deep #1 is a book that is worth picking up this week.

The Deep is extremely well written, with a family that seems real - or at least real enough - with science adventure as the cherry on top.