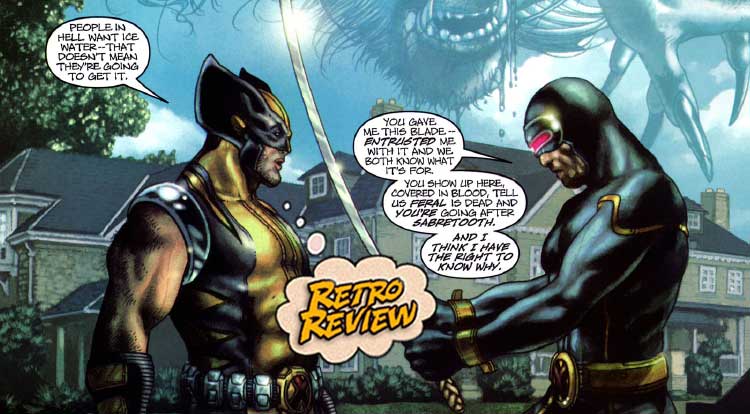 As a comic reader in the 1980s and early 1990s, many readers developed a resentment for the character of Wolverine that took a long time to disperse.  Today, I can honestly say that I don’t hate the character, and I appreciate his best stories and arcs.

And then, something like this happens…  Your Major Spoilers (Retro) Review of Wolverine #55 awaits!

Previously in Wolverine: After believing for years he was a mutant, the-man-called Logan-whose-name-isn’t-actually-Logan ran afoul of a villain named Romulus, who claimed to be the actual Romulus of myth and that Wolverine was actually a member of a lost race of feral animalistic humans known as lupines, along with Sabretooth, Alpha Flight’s Wild Child, New Mutant Wolfsbane, Feral of X-Force and… Sasquatch?  Basically, if you’re fuzzy, clawed and have atavistic tendencies, you’re probably one of them.  Over the centuries, Romulus has manipulated every aspect of Wolverine’s life, including bonding the adamantium to his bones and pushing him into the Weapon X project, leading Wolverine to return to the Xavier Academy to fetch the Muramasa blade, which can kill even him, to deal with Romulus and his puppet, Sabretooth, once and for all.

Our story opens with a ridiculously musclebound but lovingly rendered Cyclops demanding that Wolverine explains himself, while Emma Frost poses for a lingerie catalog in the foreground… The White Queen has been a lot of places, seen a lot of things, but even her debauched and jaded mind isn’t ready for the carnival of horrors contained in Logan’s memories of the man called Sabretooth. Overwhelmed by the enormity of Sabretooth’s monstrous nature and deeds, Emma falls to her knees, vomiting at the imaginary scent of remembered gore.  She entreats Cyclops to just give him the damn sword already.  The always incendiary relationship between Cyclops and Wolverine has hidden depths and undertones of brotherly competition in some writer’s hands.  Here, it’s just Cyclops being a jerk and Wolverine not even caring enough to explain his actions to a man who has been his comrade-in-arms for years.  Convinced by the display, Cyclops still takes the time to be pompous and authoritarian. I really like the art of Simone Bianchi, but there are several issues with this opening sequence, visually.   Cyclops and Wolverine’s heights are now identical (traditionally, Summers is 8 or 9 inches taller), there aren’t really any indications of what’s going on, save for one wide shot which shows the mansion in the background, and Wolverine’s exit down the row of topiaries is dramatic as hell despite the art giving us no clue as to where that path came from.  The real shame is the coloring, which is NOT up to the job of Bianchi’s delicate and intricate pencils.  (The issues that comprise this six-issue story are also released in black-and-white, which makes it easier to see past the weird mustard yellows and blues of the chosen palette.)

The next couple of pages detail Wolverine’s flashback to the events of the previous night (although the creators don’t identify it as such, making the reader do the heavy lifting) as he deals with an injured Wolfsbane and Feral’s body.  Once again, the art is beautiful, but it’s unclear to me what’s going on in the panels.  It seems that he burns her corpse, but the beautiful pyre shown has no indication of the body, there’s no inference that he puts her in it and the transition immediately shifts to Wolfsbane, shaken at her inclusion in the Lupine madness. During their conversation, Wolfsbane tells him that Wild Child spoke of the mysterious Romulus, deepening Wolverine’s resolve.  He makes his way to Silver Fox’s cabin, where Sabretooth killed his wife years ago, musing that she later came back from the dead, but he’s “not sure that really happened.”  This issue makes me mad, certainly, but that non-retcon handwave is the most frustrating thing in this utterly nonsensical arc.  Wolverine is consumed with grief over the loss of Silver Fox (which would have been really effective if the writer just chose not to address and invalidate someone else’s story with half a line of terrible dialogue), awaiting the return of his greatest enemy… Suddenly, Sabretooth arrives, fully feral and beyond humanity, only to run afoul of the Muramasa Blade’s ginsu-like acuity.  It slices, it dices, it dismembers your centuries-old enemy with one fierce strike!  The art, once again is beautiful in its individual panel construction, but fails to effectively show a sequence of events, leading to a suddenly tragic moment in the snow… I really like that sequence, narrowly avoiding what could have been a ridiculous moment and turning it into something chilling as Wolverine reveals that he finally has the upper hand on the creature who has tormented him for so long.  Unfortunately, Loeb ruins it with an extended, leaden monologue immediately afterward, a wordy uncharacteristic exposition bomb that feels very out of character for Wolverine… In his final moments, Victor Creed asserts the last shreds of his humanity, urging the man who isn’t his son, his father, his clone or his little brother to end it once and for all.  It’s a strong moment, leading to a shocking double-page spread…. Once again, Bianchi’s beautiful renderings don’t feel fluid enough to convey motion, so there’s a lot of awkwardness in the pose, but it is clear that the Sabretooth portion of Wolverine’s ongoing horror is permanently over.  Wolverine sheathes his sword, deciding not to bury his old frenemy, when Wild Child suddenly slips out of the shadows that weren’t ever established as present… Wild Child taunts that Romulus brought him here to see if he would do it, then tells a story about how the Lupines have always had two emerge from the pack, one blonde, one black, and that they would repeatedly fight for supremacy over the rest of the wolf-folk.  This is played out over a double-page sepia-tone spread of…

…things that have nothing to do with that discussion?  It seems to be a tapestry of Wolverine’s memories, but none of them germane to the story of the Lupines; Storm appears, as do Captain America and the Black Panther, but for the life of me I can’t see what this lovely poster has to do with anything.  Wolverine is surprised to find that Romulus is telepathic and knows his nightmares, but isn’t sure he really exists… Wild Child and Romulus escape into the night, leaving Wolverine to shout at the empty expanse, with a final page legend reading “The End, For Now.”

I’m taking that as a threat.

The real shame about this issue (and by extension, the entire arc) is that there are a lot of moments that could be legendary Wolverine moments, but they’re either over-written or stiffly drawn.  Bianchi makes lovely art, but doesn’t have the storytelling chops to convey a flow of events from panel to panel, making for a choppy reading experience, like a series of posters.  Wolverine #55 is a mess, you guys, a collection of clichés and retcons that might have worked in the hands of a skileld writer, but instead were quickly disavowed (and in the case of Sabretooth’s death, bluntly retconned) and left on the scrap-heap, earning a dismal 2 out of 5 stars overall, thanks to the unique art.  Worst of all, this issue came out just a couple of years after ‘Wolverine Origin’, which finally revealed the purported truth about his life, it seems like an odd choice to once again tell us everything we know is wrong…

Lovely rendering, but weak storytelling in the art, all in the service of a completely nonsensical story that contradicts multiple points of extant continuity... There's a reason this was retconned almost immediately.