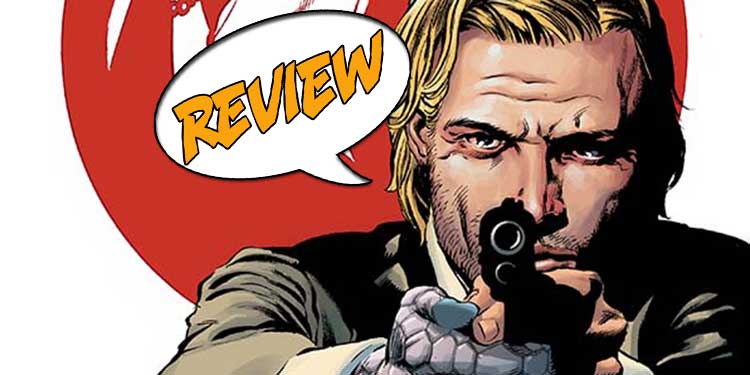 What has become of Felix Leiter? Now part cyborg, Felix makes do, but a past relationship is about to make his life very complicated. Previously in James Bond: Following the events of James Bond: Vargr, and James Bond #7, Felix Leiter, having lost an arm and a leg, makes his living as a private detective in Key West, Florida. Fortunately, the ex-CIA agent has Vargr technology to replace his missing limbs, so he gets around okay.

NEVER BRING A CYBORG ARM TO A KNIFE FIGHT

Though he may be out of the agency, Felix Leiter is in Japan doing a favor for the CIA and the Japanese government. Sure, it happens… I suppose… Anything is possible when you are writing fictional stories about fictional agencies and drunk detectives. Turns out a former Russian agent has decided to call it quits, and during her exit deleted all records of her existence. Now she’s doing “something” in Japan, and because Leiter is the only person who can identify her (because they’ve had The Sex), he’s working for the Japanese to bring her in.

As you might expect, because this is the first issue, and because Felix has spent more time with a bottle than keeping his skills in tip top shape, things don’t go well. And, because nothing in government espionage is as simple as it seems, a greater threat pokes its head out from the shadows at the end of the issue causing a lot of people to die. A lot of people. I imagine that because he is on loan, Felix will continue to assist the government while his target is revealed to be more involved than originally thought.

It is interesting that comic book continuity is the the major character flaw for Leiter. While I find it interesting that our hero has to get around with magical prosthetics that are now faulty, this first issue could have worked just as well if Felix was fully formed and simply a retired drunk. Maybe writer James Robinson has something greater planned for us than simply reflecting on the past. I’m willing to give it another issue or two to find out.

Over the last decade it has become common practice to take photographs and draw, ink, and paint over them, to pass it off as comic book art. Quite simply, I hate it; especially when it looks like a high schooler’s first attempt at applying filters in Adobe Photoshop, and passing it off as cool.

While Aaron Campbell’s character work is good, the backgrounds completely ruin the issue for me. Campbell does a fantastic job at keeping Felix Leiter on model from every angle, and his action sequence is well done, but the photo reference that look more photo than art is a huge disappointment.

I’m always intrigued by stories featuring spies and detectives. Felix Leiter is a classic Bond character, so I expect a lot of fans will be drawn into this adventure. James Robinson brings us a flawed character that is about to embark on something bigger than expected, and may invigorate Leiter into being something better than expected. For this reason alone, James Bond: Felix Leiter #1 is worth checking out when it arrives on January 11, 2017.