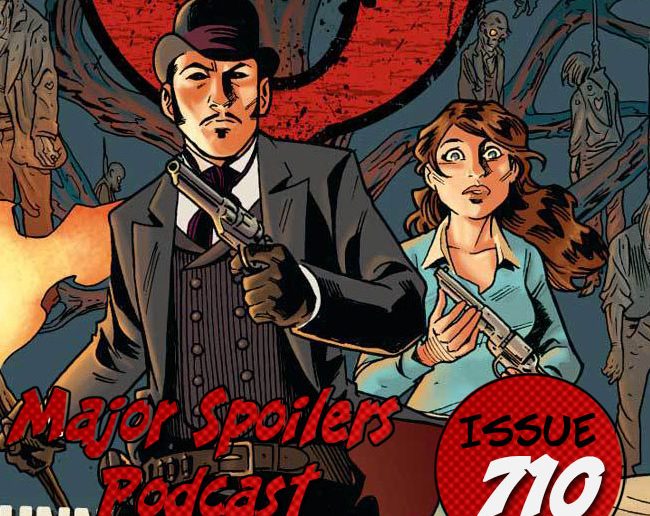 This week on the Major Spoilers Podcast: It’s a brand new year, and the gang’s all here! This week we review Go West #2, Faith #7, Hook Jaw #1, and the Doctor Who Christmas Special. Plus, The Sixth Gun goes to the bayou in Volume 2!

When a group of outlaws murders Slade’s family, he embarks on a hell-bent mission of revenge. Slade vows to hunt down every member of The Savages and tear their entire organization to the ground. Even if it means he has to cross the border into the western regions to do it. Even if it means he has to Go West. Slade’s journey of revenge leads him to “Lost Vegas” where he hopes to enlist the help of the deadliest woman in the Western Territories.

Faith Herbert has lost many allies throughout her life… Her mother. Her father. Even a fellow Renegade. Despite this, Los Angeles’ high-flying hero has always defined herself by more than tragedy. But what happens when Faith must literally confront the ghosts of her past? A mysterious force is wrenching the passed spirits of Faith’s most loved ones back from beyond the grave…and into our world to break her mind and spirit! Can Faith overcome her greatest fear…or will these ghosts soon make her one of their own?

ASHLEY
DOCTOR WHO: THE RETURN OF DOCTOR MYSTERIO
In New York City on Christmas Eve of 1992, an 8-year-old boy named Grant wakes to find the Doctor dangling outside the window of his family’s apartment, and helps him come into his bedroom.

Major Spoilers Poll of the Week: Jedi or Superman?

DISCUSSION
The Sixth Gun Volume 2
Writer: Cullen Bunn
Artist: Brian Hurtt
General Hume has been defeated and the six mystical guns are now in the possession of our heroes. But Hume is too evil to stay dead for long, and the power of the guns come at a terrible price. In the haunted bayous around New Orleans, Drake, Becky, and Gord hunt for a way to rid themselves of the cursed weapons while evil forces conspire all around them.