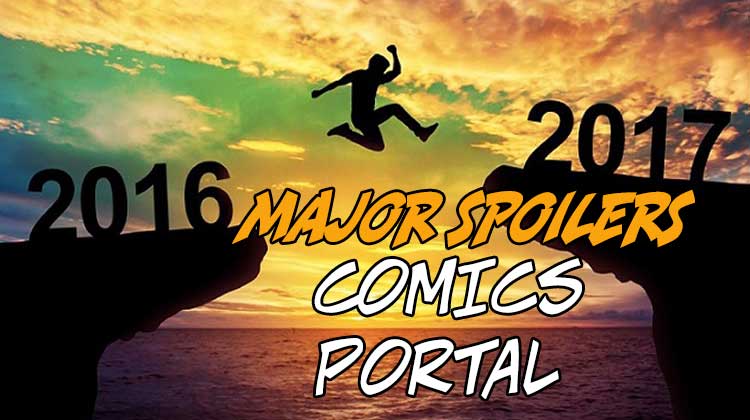 COMICS PORTAL: This Year, I Resolve …

It’s a brand new year, this 2017, and while I’m not much for resolutions, I do want to look ahead to things I want to see happen in the 12 months ahead!

See if you have similar goals in mind! Together, we can make the comic book industry a better place, I feel!

I WILL TRY OUT NEW THINGS I’ve previously noted in this column that I hadn’t gotten into the Funko Pop! figure craze, but in 2016, I was given a DC’s Legends of Tomorrow Hawkman #379 to add to my burgeoning Winged Wonder collection. They all sit looking at me as I write this, gazing my way from under my computer screen.

Also, I mentioned to someone that I wouldn’t mind having the discontinued original Hawkman Pop! figure as well, and I understand it’s on the way, arriving in the next week or so. It’s out of the box, so it’s not really all that collectible, but it’ll be nice to have anyway!

So, like it or not, I’ve been dragged kicking and screaming into the Pop! world. And they aren’t as unlikeable as I thought they might be. They’re blank faces help me use my imagination to fill in what they’re thinking or feeling.

Will I be buying many in the future? Probably not, but at least I’ll be able to relate to my friends who are big into the Pop! phenomenon much more than I have in the past.

This has helped me realize that, while I may not be a BIG fan of a fad, I should at least put my toe in the water so I can talk intelligently about something with friends and others. New things, here I come!

Exactly what that will entail, I can’t say at this point. But I’m going to continue to go through Indie comics and other things that come my way.

Hey, maybe after I finish writing this column, I might go check out the DC Comics Bombshells! That would be something! And giving some more money to the industry just might help a little in 2017!

When I write reviews and this column, I prefer to talk about things I LIKE because I feel it’s better to highlight the positive than dwell on the negative.

I still find myself ragging on Marvel occasionally. It’s easy to take shots at the “big guy,” after all. I still like my heroes more iconic (a la DC), but I can understand the desire to relate more to the people you’re reading about in comics.

In 2017, I want to be better informed about Marvel’s comics and the stories they’re telling, and I’d like to interview more Marvel creators for my weekly podcast. It’s been a while since I’ve done that, so I’m going to look over the House of Ideas’ offerings and see what they make that I like, and seek out their creators via their PR folks.

I’m also going to review their books more than I have been. I’ll spend more time supporting the characters and creators I like there. After all, my brother has been buying more Marvel comics recently, so I may follow suit!

By the way, I finally got the chance to watch Captain America: Civil War last night. I liked it! However, I doubt I’ll return to watching Marvel’s Agents of S.H.I.E.L.D. on ABC. Sorry, I’ve given that show like five chances to hold my attention. I know, I know, “It’s better now than it’s ever been!” as some friends keep telling me on a regular basis. Ah, well…

I’LL CATCH UP ON MY READING

I’ve done my part as far as buying a good number of comics in 2016, but I remain behind in reading many of the books and graphic novels I want to be current with. I’m going to set aside an hour a day to read these wonderful series’, including the Indie ones I loved at first glance and after talking with their creators.

I’ve already made good on my promise to catch up on DC’s Rebirth, and I read them within two days after picking them up. Overall, I’m still pretty pleased with the stories their telling there even though the bi-weekly format makes it tough on me to stay up to date. I often talk about this in my column, but I feel it’s critical at this point to support the comics industry as much as possible.

I probably won’t be able to buy more comics and related stuff, but I’ll talk more with people about what I think deserves their support as we move forward. As much as I love writing this column, writing reviews and creating my podcast (and I plan to continue doing all these in the years ahead), I still believe that “word of mouth” continues to be the most effective way of promoting high-quality “product,” to use an industry term.

Honestly, writing and creating takes a lot of time, but I still could get more productively involved in sharing what is created here at MajorSpoilers.com and talking about comics with friends, both online and in person.

What ways would you like to help support comics in 2017? Please share your thoughts in the space below! And have a Happy New Year!