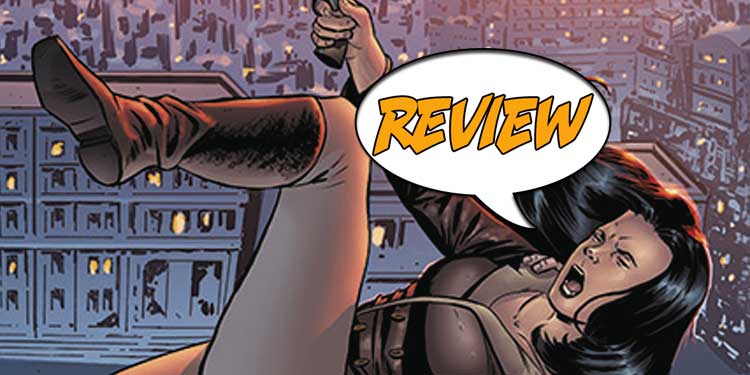 By Stephen Schleicher on January 2, 2017 0 Comments

High flying pulp adventures of yesterday have come to roost in the pages of Athena Voltaire and the Volcano Goddess! Can our heroine fight back the bad guys and win the day? Previously in Athena Voltaire: At the premiere of the film based on her adventures, Athena Voltaire met matinee idol Carter Charles. Rather than attend the post-premiere party, Carter joined Athena for a meeting at the home of her father, Louis, who recently acquired a mysterious necklace purported to have legendary powers. While they discussed what to do with the artifact, mysterious attackers burst through the window!

DON’T BRING A KNIFE TO A GUN FIGHT

The bulk of this issue is a big fight between those attending the meeting at Louis Voltaire’s apartment, and the assassins tasked with retrieving Pele’s Tears. As far as fights go, the sequencing isn’t bad, and if this were a storyboard for a movie (because it is, isn’t it?), the action is clear and direct. Every panel is filled with nods to other Athena adventures, and memorabilia, just in case you ever questioned Louis’s love for his daughter. The one thing that does concern me about the fight is we get to see everyone get their licks in, but it uses up a third of the issue. The fight is fun, but $1.33 worth of fun? That one is up to the reader, I guess.

After setting a goal of getting rid of the amulet by dumping it in a volcano, Athena seeks help and advice from local mobster, Sato Juro, who is willing to pay for the trinket. It’s a nice throwback to a previous adventure, but also reminds us that bad guys are always going to be bad – especially when they are in cahoots with Nazis. Juro reminds Major Klimt (the Nazi) to leave Athena alone, but again, bad guys are always the bad guys, and Juro quickly finds himself on the floor; dead from a bullet to the back.

In the final act, Athena makes it to the docks and boards a plane with Carter Charles, and makes her way to Hawaii. Unfortunately, the Nazis know she’s coming, and the boat pilot turns on her, and we get a thrilling boat chase across the water, full of guns, and knives, and fighting. Everything culminates with Athena left to drown in the middle of nowhere.

Overall, the three act structure of the issue works well, with each sequence adding a bit more to the story. While we still don’t know what the Nazis want with Pele’s Tears (nothing good, I can assure you, they are Nazis after all), there’s enough of a hook to draw the reader into the next installment.

Steve Bryant has double duty in this issue as both the writer and the artist. That is a big task, and I admire anyone who can handle both and do it well. Bryant gives the reader some great action sequences at the beginning and end of the book, and in between we have panels packed with subtle details and references to the Hollywood of long ago. As previously mentioned, Louis Voltaire’s house is filled with posters and memorabilia of his daughter, but a closer look reveals homages to classic movies from the period, including the works of Howard Hughes. Between the sequences, Bryant serves up a great montage of Athena’s history that gives the reader everything they need to know in visual form without reading the dialogue.

The only problem I have with the art, and it is a minor one, is the action seems rather stiff at times. There are panels and sequences where it looks like the characters were holding the pose while the artist drew the picture, instead of the artist capturing the image while the characters move. It is something that I’ve noticed from many artists over the years, but on the plus side, all artists address this problem with time.

BOTTOM LINE: IT’S THE PULP ADVENTURE YOU’VE BEEN WAITING FOR

We haven’t had an Indiana Jones series in years, and Lara Croft is now set in modern times. Doc Savage is bouncing all over time and space depending on who is writing the series, and The Shadow has gone into some dark places with the death of Margo Lane. Athena Voltaire has been around for over a decade and her adventures have always been true to her character. This issue keeps it going. I will admit, I enjoy the collected stories over the month to month tales, but Athena Voltaire and the Volcano Goddess #2 has enough globe spanning, Nazi fighting action to keep the interest level high.

Athena Voltaire and the Volcano Goddess #2

Athena Voltaire has been around for over a decade and her adventures have always been true to her character. This issue keeps it going.