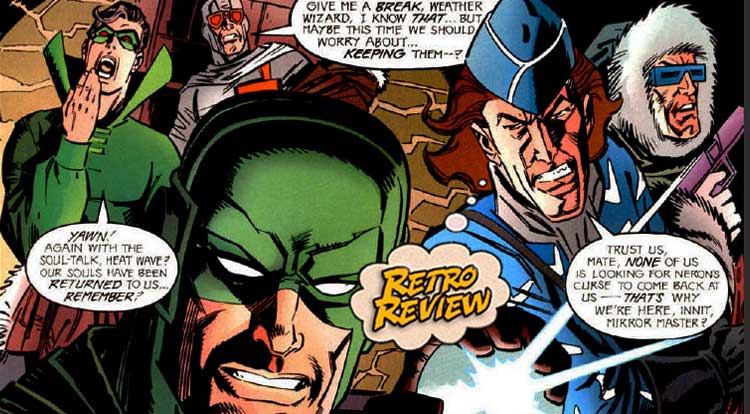 And remember, Faithful Spoilerites: “Rogue” is a dishonest (or at least playfully mischievous) person.  “Rouge” is a red-tinted cosmetic.  If you mix ’em up, a portion of the population will mock you forever.  Your Major Spoilers (Retro) Review of New Year’s Evil: The Rogues #1 awaits! Previously in New Year’s Evil: The Rogues: After years of menacing Central City and messing with The Flash, the members of the Rogues’ Gallery faced a quandary:  With their opponent dead, the life of a petty thief with a mostly magic gun just wasn’t any fun.  Many of them went straight, with a couple actually choosing the heroic life or a reasonable facsimile of one.  Then came Neron.

Many of the villains of the DCU fell into his clutches with promises of power at the cost of their immortal soul, and The Rogues were no exception.  Captains Cold and Boomerang, Heat Wave, Mirror Master and Weather Wizard gave up their souls but thanks to the manipulations of The Trickster, the demon was banished.  Now, the Rogues have made their way to the mountainous region of Zhutan, with their damaged souls returns, in the hopes of finding a way out from under Neron’s thumb… Heat Wave’s wishes are important, what writers call your ‘Chekhov’s Gun’, so watch for that shoe to drop.  While the five core Rogues prepare to secure the sun-disk of Meshta, another former Flash foe monitors their activities, with a plan of his own. James Jesse, unlike his pals, has made his way to the mountainous region to help an old friend, a woman whose son has been taken by Meshta’s followers due to their belief that he is somehow their foretold one, The Majee.  Thanks to some old scores, Trickster has manipulated his pals into seeking the sun disk, even installing an alarm to trigger their presence to Meshta’s followers.  Of course, there’s an additional complication… The Rogues resemble the five Elemental Avatars of Majee (whose elements are apparently fire, ice, lightning, light and boomerangs, which does bring up questions about who wrote those prophecies) and thus may have value… As Trickster’s plan unfolds, his old friend Mindy is very concerned, as it seems like things are going the wrong direction, allowing the temple to finish whatever plan they have for her son, but it’s okay…  Jesse’s got an angle. Once inside the temple, Trickster suddenly calls upon the power of Meshta himself, invoking the god to protect him (and the would-be Majee) against his own followers.  And the only way you could fake something like that is if you’re a genius with massive technical know-how and perhaps an accomplice who is a genius in all matters sonic… Unfortunately, as clever as James Jesse is, he didn’t manage to cover all the angles, as the leader of the Meshtans calls upon a corresponding spirit of darkness to grant him power to overcome the interlopers… Suddenly finding themselves under attack, the five soul-challenged Rogues engage in battle, unsure of whose side they’re actually one.  When Trickster instructs them to grab the giant sun-disk, they obey, but then realize they’re in possession of a massive golden idol… Heat Wave’s conscience finally gets the best of him, and the fiery felon realizes that WHY they lost their souls is at least as important as how to keep them safe, and leads his pals in battle against the lizard avatar.  I have to admit, Ron Wagner has never been a penciller that I get super-excited about, but his collaboration with inker Reynolds gives this issue life, making fighty-fighty exciting, the facial expressions vivid and the eerie things eerie.  Speaking of eerie, did I mention the Rogues were on the run from a devil himself? All seems lost for The Trickster, and his streak of tricking infernal figures seems to be at an end, until Cindy reminds Captain Cold and company of what Heat Wave said like five pages earlier.  (Short memories, these guys.  It explains why they kept facing a light speed force of nature with gadget guns and parkas for so many years.) Of course, things get even heavier when Mindy’s son reveals that his IS, in fact, The Majee, channeling an elemental angelic presence of Meshta to challenge the pointy green demon… The genius of The Trickster’s plan becomes clear, as Neron is easily and completely overpowered by a genuine celestial presence, and is seconds from annihilation when Jesse offers him a little deal… And that’s the story of how The Trickster beat the literal devil…  TWICE.  And don’t think he’ll ever let you forget it, even if you are one of his former pals from Central City.  Having saved his friend’s boy and the souls of his running buddies, Jesse prepares to bask in the adoration of his pals… ….and THERE’S Heat Wave’s final change of heart, deciding to stay and learn the ways of peaceful meditation in the mountain sanctuary, while Trickster learns about being a dad.  This issue is one of the main reasons I hated the treatment of Trickster and Pied Piper in ‘Countdown’; aside from that story being a train wreck of epic proportions, it killed the momentum of a couple of cool DCU side-characters with fascinating arcs.  All in all, New Year’s Evil: The Rogues #1 is a solid, entertaining issue that, sadly, never got as much follow-up as I hoped it would have, with strong art and a truly clever hunk of story, earning 3 out of 5 stars overall.  If you imagine Mark Hamill, Dominic Purcell and the rest of the TV actors as their counterparts, it’s even more entertaining….

The Trickster is a genius, The core Rogues have a devil over their shoulder, and things get really weird for a bit... Recommended!