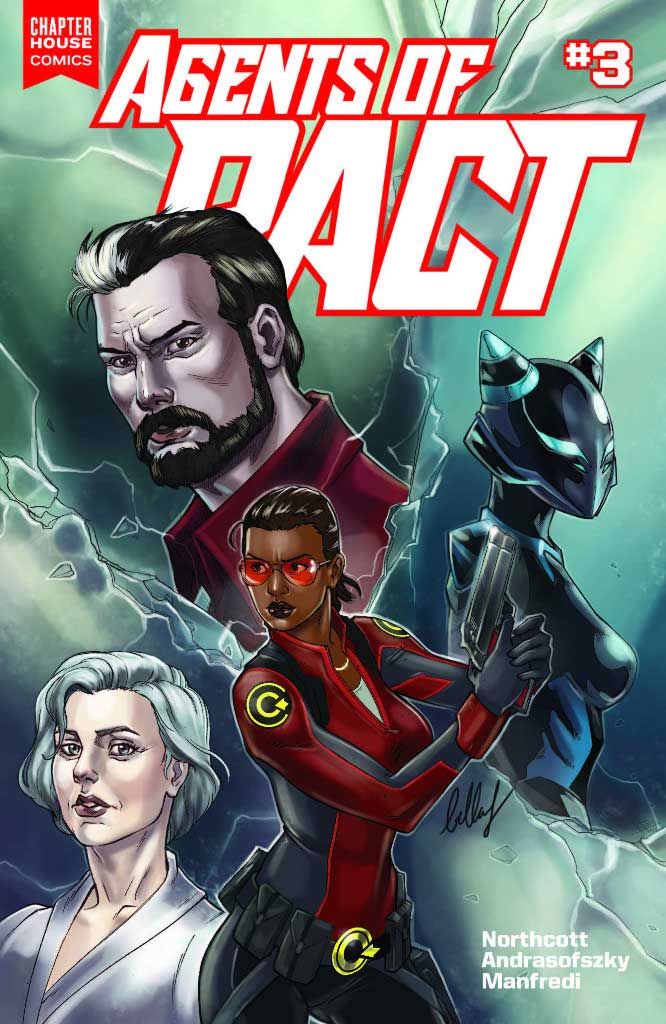 AGENTS OF P.A.C.T. #3
The CHAPTERVERSE continues
Hot on the trail of the extra-dimensional invader, the Agents are led right into the belly of the beast:Equilibrum HQ! And Michael Evans is anything but happy to see them. Caught between two deadly threats, all seems lost until the secret fifth member of PACT reveals herself! FREELANCE #3
The CHAPTERVERSE continues
Terror on the racetrack! In the penultimate issue of the series, Apollyon has activated the Breach Key in Istanbul, and only Lance and his team stand in the way of total destruction. But when one member gets kidnapped, Lance must outrace the clock if he hopes to save the world – and his friend.
Pulse-pounding action, wit, intrigue, and globe-trotting romance – One of Canada’s original heroes is reborn for the Chapterhouse era by writers Andrew Wheeler (Another Castle) and Jim Zub (Thunderbolts), and artist Vaneda Vireak (51Hundred)!
Cover – Alex Perkins $3.99 | Written by Jim Zub and Andrew Wheeler | Illustrated by Vaneda Vireak |
32 pages, 6.25/10.18 | Full Color
Diamond Order# JAN171566 DIE, KITTY, DIE!
Volume One
Kitty Ravencraft, a beautiful and magical young witch, is the star of her own popular comic book. When her greedy, publicity-starved publisher wants to increase interest in her comic book, he does what many comic book publishers do nowadays… he sets out to kill his main character, Kitty! Even worse, he decides to REALLY spike sales by killing the REAL Kitty in REAL life! The question is though… how do you kill a witch? Tell The Story— Captain Canuck: The Sasquatch Cometh
Offered Again
TELL THE STORY is an activity book featuring sequential art or graphic narrative (comic book-style stories) with blank word balloons and space for captions. Adding art and providing the lettering enhances the learning experience. The aspiring writer and artist in all of us and of all ages can now creatively Tell the Story with their own words. This Premiere issue of the Tell the Story series features Captain Canuck in “The Sasquatch Cometh” by creator Richard Comely!