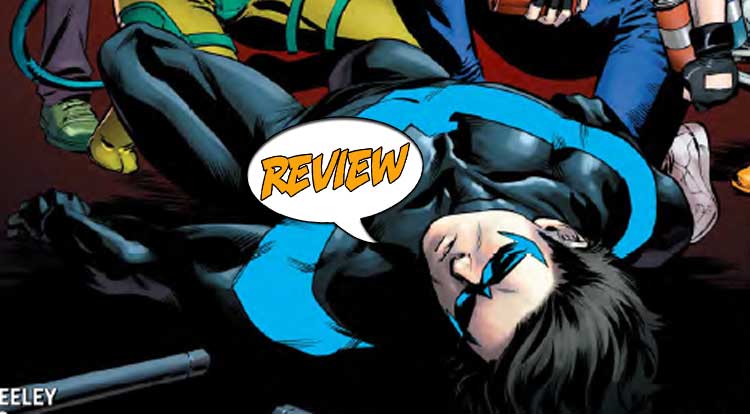 Dick Grayson has left Gotham to make his own way in another city…  a hive of scum and villainy known as Blüdhaven.

Anybody else having a little deja vu?  Your Major Spoilers review of Nightwing #11 awaits!

Previously in  Nightwing: Some years ago, as Robin, Dick Grayson helped the Batman take down a villain known as The Pigeon and her de facto sidekick, The Defacer, both of whom had a thing for stealing statues.  Now, The Defacer has grown up, hung up her costume, left Gotham and gone straight.  Unfortunately, she has chosen to do so in the same city where Nightwing has now chosen to hang his hat.

After a flashback to their first meeting, Nightwing is confronted by Shawn Tsing, the artist formerly known as The Defacer, who is also Dick Grayson’s new boss.  After giving up her villainous career, she has helped to form a support group for other outcast wannabe villains of Gotham, all of whom want to know what has happened to one of their own, Gorilla Grimm.  It’s interesting to see the former villains negative responses to Nightwing, ranging from rage to abject fear and back, with Shawn herself particularly angry that he has followed her to Blüdhaven.  Investigating Grimm’s disappearance and a related murder case, Nightwing tracks down solid evidence that the Gorilla was framed, only to have the police arrive and take Shawn into custody…

THIS ALL FEELS A BIT FAMILIAR

As someone who remembers Dick’s first run in Blüdhaven back in the day, this is all pretty interesting, if a little bit familiar.  I like the idea of Dick striking out on his own, though, and the idea of the former supervillain support group is a new take on superhuman life as well.  Artistically, this is a really lovely issue, as Marcus To does great work not only with the design of the villains and the combat/acrobatic sequences, but makes a quiet moment of attraction between Dick and Shawn wonderfully romantic.  There’s also a bit of foreshadowing where an ad agency has chosen Nightwing as the new face of their campaign, as proof that Blüdhaven is safer than Gotham and such, which lead not only to blowback from Shawn, but some resentment from the police as well…

Still and all, it’s good to have Nightwing back in action after a few years of costumeless spycraft, and I like the idea of Dick Grayson setting out to be his own man in a city that isn’t constantly in the shadow of his adoptive father.  (I’m even okay with doing it again, as 20 years is a long time, and every comic book story is someone’s first comic book story.)  In short, Nightwing #11 is a solid, entertaining read with some interesting takes on hero/villain theory, a nice romantic subplot and lovely art, earning a well-deserved 4 out of 5 stars overall.  If you’re interested in the whole Batman vibe without all the unnecessary grunting and melodrama, I’d recommend you give this one a try…

Interesting characters and a new wrinkle on superhuman life, all the better to complicate Dick Grayson's life...