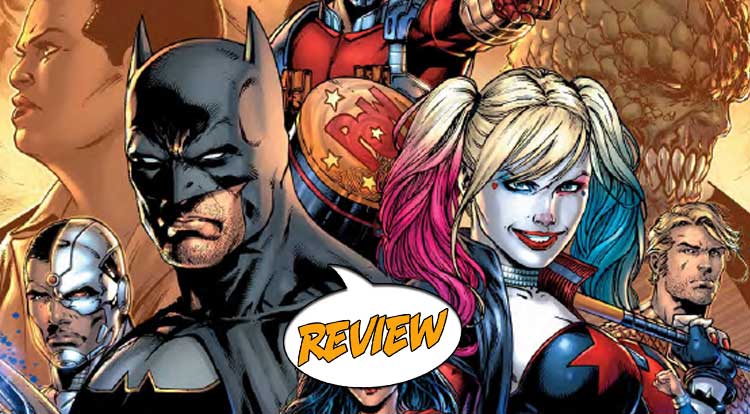 Previously in Justice League Vs. Suicide Squad: They are polar opposites: The world’s greatest heroes working together to secure the entire world and a bunch of ragtag villains under the command of a woman with a grudge and questionable morals.  The history of conflict between the Justice League and the Suicide Squad is decades long at this point, so the only real question is, what caused the fight THIS time?

THE LEAGUE IS APPALLED

Somewhere, in a mysterious hidden prison, a man whose face is unseen walks right in and incites a breakout.  The men in charge speak of monstrous prisoners who “are not of this world” (which makes me wonder if we’re seeing pre-Flashpoint characters?) before being destroyed, along with his men.  As the strange walks away with his new charges, he bids them to follow him into the heart of darkness.  Cut to Belle Reve Penitentiary, where Amanda Waller’s Suicide Squad (Harley Quinn, Killer Croc, Captain Boomerang, Deadshot, El Diablo and Killer Frost) are being remotely surveilled on their latest mission.  Their dialogue involves a healthy infodump on the whys and wherefores of the Squad, along with the news that their mission is to taken out an even badder dude named Apex.  Smash-cut once again to the Justice League Watchtower, as Batman reveals to his teammates the existence of the Suicide Squad, much to their consternation.  (Aquaman remarks that he’d be very concerned if Black Manta was involved, which is funny since, until recently, that villain was part of the Squad.)  The League immediately moves to intercept the Suicide Squad, leading to the beginnings of a confrontation.  Elsewhere, our mysterious prison breaker addresses his new friends, revealing himself to be…

…Maxwell Lord, back from the dead.  Or not…  I’m not sure if he appeared and/or died yet in the post-Flashpoint reality.  Adding to my confusion, his team includes Lobo (scraggly 90s biker version), an Emerald Empress (who by all rights is from the future) and Johnny Sorrow.  The idea that Rebirth is integrating the old and new universes is fresh in my mind, so any or all of these may be extradimensional, leading to confusion, not all of it constructive the plot.  Jason Fabok does an excellent job with the art in this issue, channeling a little Jim Lee, a little Rags Morales and just a hint of Mike Grell into a mostly integrated whole.  Some of his facial expressions are a little on the loose side for my tastes, but the action sequences look good, the costume detail is exquisite and even the long talking head sequences are varied and visually interesting.  The plot is a little too full of character interactions and smash-cuts for my tastes, but overall, the book held my attention well enough.

THE BOTTOM LINE: NOT SURE ABOUT THIS ONE

The big question for me, of course, is whether this team of Suicide Squadders is going to live up to the name and lose a few people in the coming issues.  (Even back in ’87, when these teams clashed before, there were minor villains who bit the big Twinkie, but are these heroes too high-profile for that?  Are Max’s team possibly on the chopping block?)  All in all, Justice League Vs. Suicide Squad #1 seems to be aimed at movie fans looking for more of that universe, doing an okay job of explaining who everyone is and what they’re doing, but making for an overstuffed plot that never quite finishes anything, earning 2.5 out of 5 stars overall.  There’s potential for greatness here, but with this many reveals and characters in play, it may be hard-fought (and the prominence of Batman and Harley Quinn on the cover and in the story make it clear who the stars of the story are meant to be.)

A lot of set-up for the coming battle, with an intriguing last-page reveal... Solid art.